The Peril of going to the IMF: Is there an alternative?-by Chandre Dharmawardana 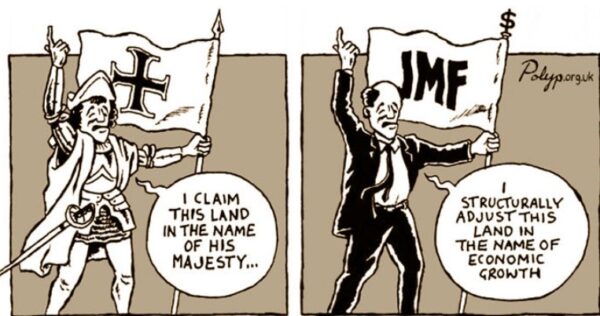 The forex crisis had forced the government to jettison its initial set of economic managers of the Central bank who looked for home-grown solutions and opposed dealing with the International Monetary Fund (IMF). The President re-instated a set of managers whose ideas were more orthodox and aligned with the neo-liberal bankers of the West. This “about turn” by Gotabaya Rajapaksa fitted perfectly with the views of his successor Mr. Wickremasinghe.

Gavin Karunaratne, a retired civil servant of the 1950-1970s era, has published a new booklet entitled “How the IMF’s structural adjustments destroyed Sri Lanka” (Godage Publishers) where he claims that today’s ills are a direct consequence of JR Jayawardena’s IMF-inspired policies. JRJ converted Sri Lanka’s “produce locally to consume and sell” economy of the Sirimavo era, to a post-1977 “import and sell” consumer economy. In 1975, Lanka’s foreign debt was negligible. According to Karunaratne, “the foreign debt of the country kept mounting throughout the rule of President Jayawardena, …, reaching to special drawing rights (SDR) of six billion by the end of 1994”. Here we may quote Maliyadde (The Island: 23/06/2013) that “at the end of 1976 the foreign debt of Sri Lanka was only $ 75 million, (and that) the external debt liability had increased by more than 500 times in 35 years, with a 2020 foreign debt of around $ 56 billion”. So these claims of Gavin Karunaratne are consistent with mainstream views. Unfortunately, the book has no illustrations, maps or graphs.

Sri Lanka is facing a flood of economic and political turmoil that began as a minor Cabinet tussle against the then Finance Minister Bail Rajapaksa’s policies and “midnight deals”. However, it coincided with a farmers’ protest, triggered by collapsed agricultural incomes. A knee-jerk 100% ban on agrochemicals, imposed in 2021, by Gotabaya Rajapaksa, was imposed in the name of environmental policies, designed to create a “toxin-free” Sri Lanka, long supported by Champika Ranawaka, Venerable Ratana, advocates of traditional agriculture, and by the Viyath Maga – the “learned” advisory group of President Gotabaya. The JVP (Marxist) leaders, as well as many Western-funded “green” NGOs, welcomed it. Gotabaya boasted of it at the Climate summit and earned kudos from Prince Charles! The hidden reason for the leap into eco-extremism was the lack of foreign exchange even to pay for the import of fertilisers, needed for Tea, Rubber and other export crops, and for the paddy crop that feeds the people. That the investment in agrochemicals paid itself by almost a factor of five in export earnings was ignored by the short-sighted presidential advisors, dazzled by their “green” myths. Sri Lanka had relied on tourism, inward-remittances from expatriate workers, as well as its exports to service its foreign debts, and also to pay for its imports of fuel, food and pharmaceuticals. Of course, the arrival of the Pandemic, and the Ukraine war, created collapse. The government had to declare bankruptcy and look to foreign help, and the IMF.

Unlike the economy of a large country, with its own economy, that of Sri Lanka is almost a random function of a multitude of market forces, beyond predictability, even though fully determined by such forces. Such systems are well recognized in modern chaos theory. Meanwhile, one is amazed to hear of a lawsuit seeking action against 39 persons, allegedly responsible for “mismanagement” of the country’s economy! Among the 39 are included Ranil Wickremasinghe, Mahinda Rajapaksa, former Finance Minister Basil Rajapaksa, former Secretary to the President P.B. Jayasundara, former Central Bank Governors Ajith Nivard Cabral and Prof. W.D. Laxman. etc.! Clearly, the petitioners seem to believe that economics is like engineering or medicine where professionals diagnose a problem unequivocally and provide remedies with a high degree of consensus. In such situations, failure to take correct steps would indeed be professional negligence. But this is NOT so for economics.

The litigants should heed Bernard Shaw’s comment that “ten economists seeking an exit from the same crisis will point in twelve different directions”! The litigant academics should revisit Friedrich von Hayek’s Nobel Prize address about the questionability of economic “knowledge”? Agricultural science is much closer to being a science capable of predicting the harvests to be expected, and so, shouldn’t the litigants take the architects of the toxin-free programme to court more meaningfully?

The assumption that major economic doctrines are independent of political ideology is clearly false. Even the attitude to foreign debt, and how it is discussed are coloured by political ideology. Western media claim that Sri Lanka has been caught in a “Chinese debt trap”. In reality, the percentage shares of the debt are: international capital-market borrowing 47%, Asian Development Bank 13%, China 10%, Japan 10%, World Bank 9%, India 2%, and others 9%. A significant share of the debt was created by orthodox economists during the “Yahapalanaya” era of the Sirisena-Wickremasinghe government.

Gavin Karunaratne, in his book, discusses how the JRJ government dismantled local industries and allowed the “private sector,” or the foreign investor, to do whatever they pleased. He notes that the inflow and outflow of Forex is not known to the government as private banks have wide liberties in managing their Forex, while the Central Bank mainly controlled domestic funds and domestic money supply.

The way out of the impasse

Given the present Forex crisis, the government cannot even run its day to day affairs, without a loan. Karunaratne gives us a brief account of the negative effects of JRJ’s free-market policies on a fledgling developing economy of a very small country. He does not tell us how to obtain the immediately needed Forex, or what to do with the accumulated debt. His long-range solution is largely to return to the model of local production that was laboriously built up under the Sirimavo government. Even if that were the right model, unlike in 1970, the country currently has no Forex to move forwards.

However, Karunaratne and many others, including the spokespersons of the “Aragalaya” (Agitation and Protest) groups rarely indicate the next set of steps. It is amusing to read some writers hark back to how the Kerensky government was replaced by the Bolsheviks, although the dynamics of each such black-swan event is utterly different from each other and those of yore. The only common factor is that all such “political revolutions” lead to arson, anarchy, and gory gulags.

The nature of globalization and the consequent incapacity of small nations to guide their economic destines make a strong case for demanding a general monetary amnesty – a debt cancellation programme – that should be launched in the wake of the Ukrainian war that toppled the precarious balance. The war is a massive money earner for the arm- manufacturing nations (https://www.youtube.com/watch?v=26O-2SVcrw0).

Furthermore, we can extrapolate from the 1970s model that Karunartne seems to strongly support. A small country like Sri Lanka CANNOT plan its economy unless and until it achieves some sovereignty over its supply of food and fuel. Energy is the life blood of modern societies. I have in my past writings (The Island 6th May 2019, and The Island, 27-June-2022) contended that Sri Lanka can use its biodiversity and its agrarian cultural framework rather than traditional industrialization to achieve self-sufficiency in food, and energy within a few planting seasons. Lanka had achieved self-sufficiency in food already, prior to its misadventure with “Toxin-Free” pseudo-science. As for energy, virtual self-sufficiency in petroleum and diesel substitutes can be achieved by exploiting its vegetable oils, as well as dendro (wood) energy. Exploiting solar energy has to wait for enough Forex savings to purchase solar panels. They should be installed on floats deployed to cut evaporation of water from reservoirs, and thereby increase hydropower outputs by 30-40% even without solar panels.

So, although Karunaratne has not touched on several issues and stuck to bashing the IMF, it is a rapid read and a spring board for further thought.