The container ship, X-Press Pearl, was registered in Singapore and operated by one of the largest feeder ship operators in the world, X-Press Feeders. X-Press Feeders operates a route that includes Port Klang (Malaysia) via Singapore and Jebel Ali (UAE) to Hamad Port (Qatar), with the return journey to Malaysia via Hazira (India) and Colombo (Sri Lanka). The ship was commissioned in February 2021 and was 186 m in length. The ship departed the port of Hazira (India) on 15 May 2021 and arrived in Colombo on 19 May and was anchored off Colombo Port (~9.5 km offshore in a depth of 21 m). On 20 May, the ship reported smoke from the cargo hold, and the following day (21 May), the vessel reported a fire on the deck. On 22 May, sound of an explosion was heard in cargo hold #2 and the ship was on fire. By 24 May, the fire had intensified and was spreading toward the aft of the vessel. A louder explosion was heard on 25 May and all personnel were evacuated. The fire burned for 13 days. On 2 June, efforts to move the ship into deeper waters failed, with the aft portion sinking to the seabed at a depth of about 21 m. The forward section was still afloat on 8 June. The height of the ship was ~44 m; thus the bridge section is currently above water.

The vessel was transporting 1,486 containers, with a mixed variety of cargo; however, eighty-one of these containers were declared as carrying dangerous goods. This included 25 tonnes of nitric acid, sodium hydroxide and other chemicals and 78 tonnes of plastic nurdles (low-density polyethylene pellets). It also has more than 300 tonnes of fuel in its tanks.

Sri Lanka occupies a unique location within the equatorial belt in the northern Indian Ocean, with the Arabian Sea containing higher salinity water on its western side and the Bay of Bengal containing lower salinity water on its eastern side. The region is characterised by bi-annually reversing monsoon winds, which control the surface water circulation. In general, the currents during this time of the year are such that they flow south along the west coast of India (West Indian coastal current; Figure 1), cross the Gulf of Mannar, and flow south and east along the west and south coasts of Sri Lanka, respectively. There is a recirculation, the Sri Lanka dome, to the east of the island. The Sri Lanka dome connects the water from the west coast to that on the east coast, with currents flowing south along both coasts. During the initial period of the incident, there were strong onshore winds (> 10 ms–1) and waves (~2 m). This was associated with the beginning of the south-west monsoon and the currents were flowing to the south. On 22 May, tropical cyclone Yaas formed in the northern Bay of Bengal and propagated to the north. Examination of the water level records along the east of India and at Trincomalee showed evidence for a continental shelf wave propagating southward and clockwise around Sri Lanka. The mean water level at Trincomalee started to increase whilst the mean water level at Colombo was decreasing. This resulted in the currents reversing and flowing east and north along the Sri Lankan south and west coasts, respectively, after 30 May (Figure 2). The winds decreased to < 5 ms–1 after 2 June. 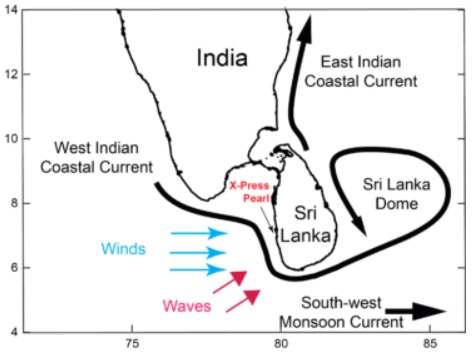 Figure 1 – Location of the X-Press Pearl and the major currents in the region. The wind and wave directions experienced during the incident are also shown.

It is possible to use computer models to simulate the ocean currents and to track the parcels of water (particle tracking) at the surface that contain the buoyant plastics. X-Press Pearl was transporting 78 tonnes of low-density polyethylene pellets called nurdles in three containers. Nurdles are used as a raw material for the manufacture of plastic bags. For comparison, the potential 78 tonnes of nurdles realised by X-Press Pearl is the second worst release of nurdles from ship accidents. This includes the 150 tonnes released into Hong Kong harbour in 2012 during a typhoon, and 49 tonnes released into Durban harbour in South Africa in 2017 and now making landfall in Western Australia. On 25 May, large quantities of nurdles were washed up on the beaches closest to the where the ship was anchored. These were transported onshore because of the strong winds and high waves present at that time. There were reports of nurdles being found along the south coast. Our computer modelling indicated that the containers with the nurdles fell into the ocean prior to 25 May. It would not be possible for the nurdles to travel to (say) Hikkaduwa in the elapsed time. Our model results indicated that the southward movement of the nurdles continued as far as Dondra Head until 31 May and then went offshore (Figure 2). There was also a northward movement as far as Chilaw.

By 4 June, the nurdles were pushed northward (to Kalpitiya and beyond) as well as dispersed offshore (Figure 2) because of the reversing current. The model simulations were confirmed by satellite-derived surface chlorophyll concentrations (SCC) obtained from the Sentinel-3 satellite on 2 June 2021 (Figure 3). Here we used the SCC as a passive tracer to track the pathways of surface currents. SCC can also be used as a proxy for the nurdles. The plume of higher SCC moving offshore from the south-west corner of the island and moving eastward farther offshore is the same pathway followed by the simulated nurdles (Figure 3). The nurdles will continue to be present in the surface waters of the Indian Ocean for many decades and will make landfall in many of the Indian Ocean countries (e.g. Indonesia, India, Maldives, Somalia) because of the reversing monsoon currents in the region. It should be noted that the nurdles themselves are not toxic; however, fish and other marine creatures (e.g. turtles, dolphins) can be killed. Fish can suffocate if the nurdles get trapped in their gills. Turtles and dolphins can die either through suffocation or ingestion of large quantities of nurdles. Nurdles are buoyant and found at the ocean surface; hence they are unlikely to impact bottom habitats such as coral reefs. The nurdles on their own are generally not toxic to humans, but they provide a surface for growing bacteria and for contaminants to attach to. If this happens, they can become toxic to humans. However, they will be a visible pollutant on our beaches for many decades to come.

Figure 2 – Predicted surface currents (black arrows), sea surface temperature (colour contour) and locations of nurdles (black dots) on 31 May (left) and 4 June (right). The location of the X-Press Pearl is shown as a red dot. Figure 3 – Surface chlorophyll concentrations around Sri Lanka obtained from the Sentinel-3 satellite on 2 June 2021. The red colour signifies high values; the blue represents clouds. The chlorophyll can be used as a passive tracer to track surface waters. The image confirms the model predictions shown in Figure 2.

Of the chemicals on board, nitric acid appears to be of the most concern. The 25 tonnes of nitric acid at a density of 1510 kgm–3 amounts to 16.5 m3. Even neglecting that some of the acid might have been burnt during the fire, this is a very small volume compared with that of the ocean. If we take a unit square metre of a water column (1 x 1 m), then the volume of this column is 21 m3 less than that carried in the ship. It also amounts to one hundredth of the volume of an Olympic-sized swimming pool. Also, because of the higher density of the nitric acid compared with that of seawater, the acid will sink and be mixed in the water column rapidly aided by the high winds experienced. If we consider the volume over 1 square km to a depth of 5 m, mixing of the 16.5 m3 into this volume would result in a dilution rate of 30,000; thus the impact of these chemicals in the marine environment would be negligible. 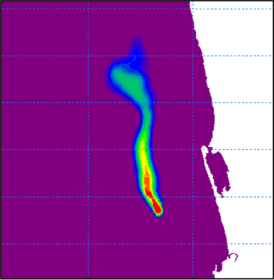 Figure 4 – Predicted pathway of released oil from the location of X-Press Pearl at 0530 on 4 June after 13 hours. During this period the winds were low (< 5 m/s) and therefore the transport was parallel to the coast.

The other major concern is an oil spill. It has been estimated that the ship contains ~300 tonnes of fuel or bunker oil in its tanks. It is uncertain whether some or all of the oil was burnt during the fire. A simulation undertaken using an oil spill model on 4 June indicated that the oil plume would not make landfall but extend up to 35 km to the north (Figure 4). During this period, the winds were low (< 5 m/s) and thus the transport was dominated by the ocean currents that were flowing to the north.

The incident occurred during a period of strong winds and high waves, which resulted in the onshore movement of the nurdles and high accumulation on the beaches directly onshore of the ship location (e.g. at Pamunugama). Subsequently, nurdles were found along an ~300-km stretch of the coastline along the west and south-west coasts transported by the prevailing currents: initially to the south and then to the north. As the south-west monsoon becomes established, the nurdles could be transported around the Sri Lanka dome and impact the east coast of Sri Lanka. Some of the nurdles will be transported to the east and impact Indonesia. When the monsoon currents reverse, the nurdles will be transported to the west and may beach in the Maldives and Somalia. The volume of chemicals released was small and it is unlikely that they will have a major effect on the marine environment. There is a potential for an oil spill to occur, although it is uncertain how much oil is currently on the ship. Irrespective of the oil spill, it is the worst man-made maritime disaster in Sri Lankan history to date.

Oceans Graduate School and the UWA Oceans Institute, The University of Western Australia