Truly amazing pictures, each, with a story attached.

An ideal few minutes of visual entertainment for all our eLanka readers to ponder upon. In case some of you have already seen this superb little “post”, I apologise, but, at the same time, do think that a 2nd or even 3rd viewing coukd be just as interesting.

10 Pictures With Fascinating Stories Behind Them!

It’s said that there’s a story behind every picture, and the 10 you’re about to see below are certainly no exception. While some are just downright odd, there are others depicting moments that literally changed the world forever. Here are 10 photos that have truly fascinating stories behind them: Polish medium Franek Kluski claimed to have the ability to make spirits materialize, and one such “materialization” can be seen in the picture above. He was also allegedly capable of making ghosts’ handprints appear on melted paraffin. When he was once asked to materialize a face, his séance attendees opened their eyes to see the impression of a buttocks in the wax Kluski was using. It turns out that he was later confirmed to have a burn on his buttocks.

2. Demonstration against the Prohibition, 1931

History has shown that banning alcohol actually fuels people’s inclinations to drink and that regardless of whether it’s legal or not, there will be supply if there is demand. The Prohibition lasted for no less than 13 years in America, a period during which countless bootlegging criminal gangs sprung up around the country, taking control of its alcohol supply.

3. Hedda Hopper interviews Cary Grant before spreading rumors about him, 1948 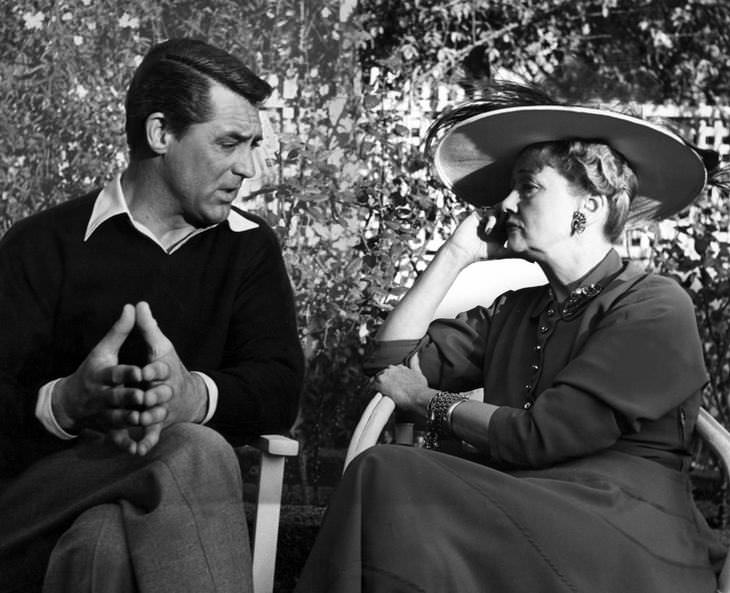 Actress Hedda Hopper starred in many movies during the 1920s and early 1930s, but her career was waning by the end of the latter decade. Luckily for her, she got the opportunity to begin writing a gossip column for the Los Angeles Times. In the picture above, Hopper is seen with the quintessential Hollywood leading man, Cary Grant. She promptly went on to imply that he was homosexual in her column, but it wasn’t the first or the last time she stirred up trouble about a prominent Hollywood figure. She attacked Charlie Chaplin for his political views, for instance, which led him to move to Switzerland. 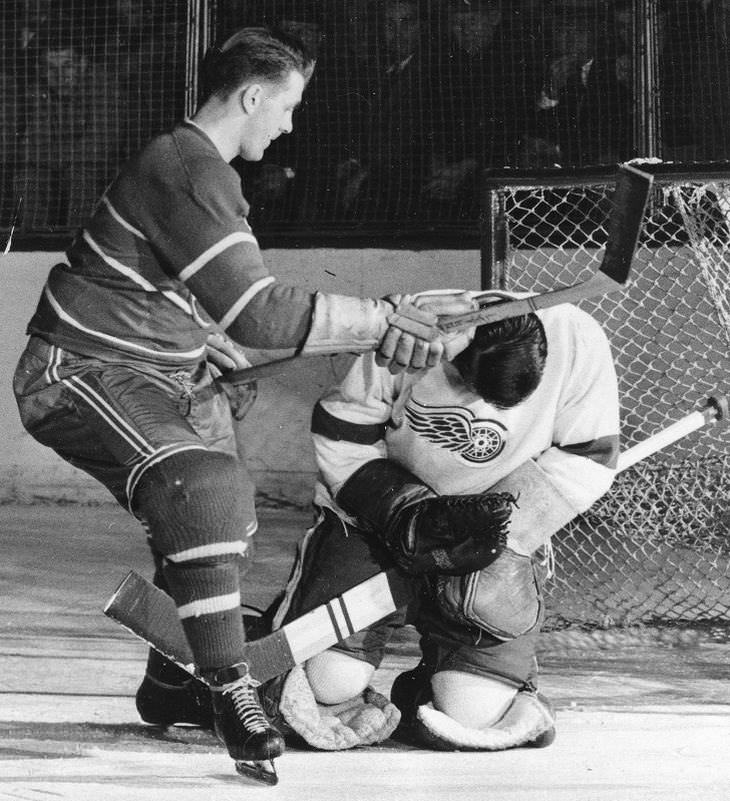 It took the National Hockey League until 1979 to make hockey helmets mandatory, which is surprising when considering that other protective elements such as knee and elbow pads were already in use. Terry Sawchuk had lived, played and died (he was the all-time leader among NHL goaltenders at the time of his death in 1970) long before such a rule was enacted. The picture above depicts one of the many instances that he got injured while in an ice hockey rink. 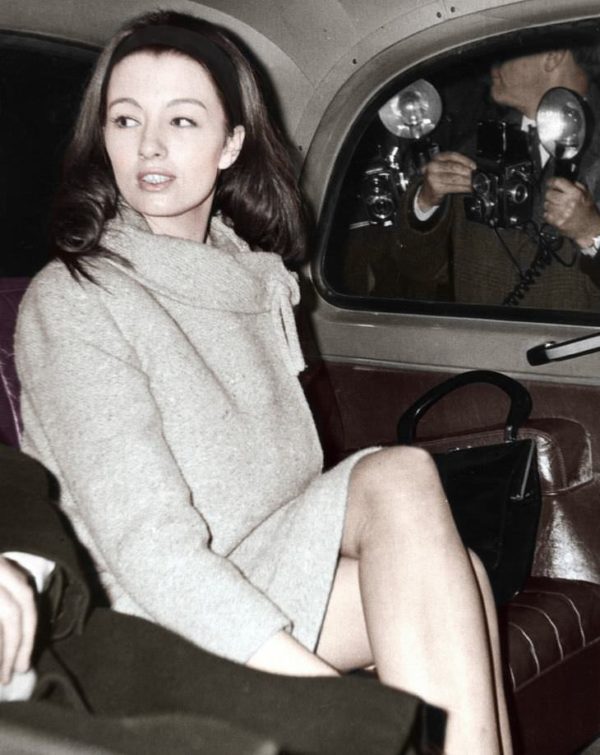 Christine Keeler was just 19 years old when she became embroiled in a scandal that would eventually bring down the British Conservative government of Harold McMillan. John Profumo was the Secretary of State for War. He was also a married man but was exposed by the British media to be having an affair with Keeler. To make matters more complicated, Keeler also became involved with a Soviet diplomat. Two of her other lovers were fierce rivals for her affections, to the point where one of them shot at the house where she was staying. The lover was promptly arrested, and his trial soon brought Keeler to public attention.

Amateur geologist Stefan Michalak made the claim that he’d seen two unidentified flying objects one evening in 1967. One of them allegedly landed, so he went to take a closer look. As he approached the craft, Michalak saw that there was an open doorway or entrance into it, and he could also hear human voices. At first, he thought that the craft was an experimental one belonging to the United States Air Force, so he approached it and asked if anything was wrong.

The voices he heard suddenly fell silent and the craft flew off in an instant, leaving Michalak to be struck with a blast of strange exhaust fumes that left an odd pattern on his body. What’s more is that Michalak experienced symptoms of radiation sickness, and radium-226 was found in the place where the craft allegedly landed. Doctors examined the geologist to see if he was of sound mind, and they proved that he was. Seeing as no-one was able to disprove Michalak’s story, it’s believed to be true.

7. The last Shah of Iran, Mohammad Reza Pahlavi, with his family in 1970 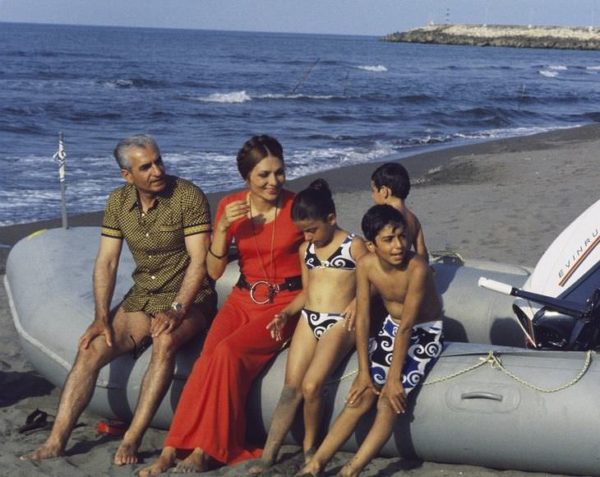 It’s unbelievable to think that pictures of Iranians taken nearly 50 years ago look far more contemporary than pictures of Iranians taken today. It was normal for them to appear in public wearing European clothing, as well as for women to expose their hair. This photo of the last Shah of Iran was taken some 9 years before he was overthrown during the Iranian Revolution. He escaped to Egypt with his family, where he died soon after. Back in 1975, the United States decided to evacuate more than 2,000 children to safety from the disastrous quagmire that was South Vietnam. An American businessman, by the name of Robert Macauley, actually mortgaged his house to charter a plane for more than 300 of the children when he found out that a lack of military transport planes to fly them out was delaying their evacuation. Some of the Vietnamese children who were on the plane returned home some 30 years later to pay tribute to the people that had saved them.

There was worldwide media attention to accompany Louise Brown’s birth back in 1978. Although in-vitro fertilization was a brand-new thing 40 years ago, there are now more than 6 million people born off of the procedure living in the world today. 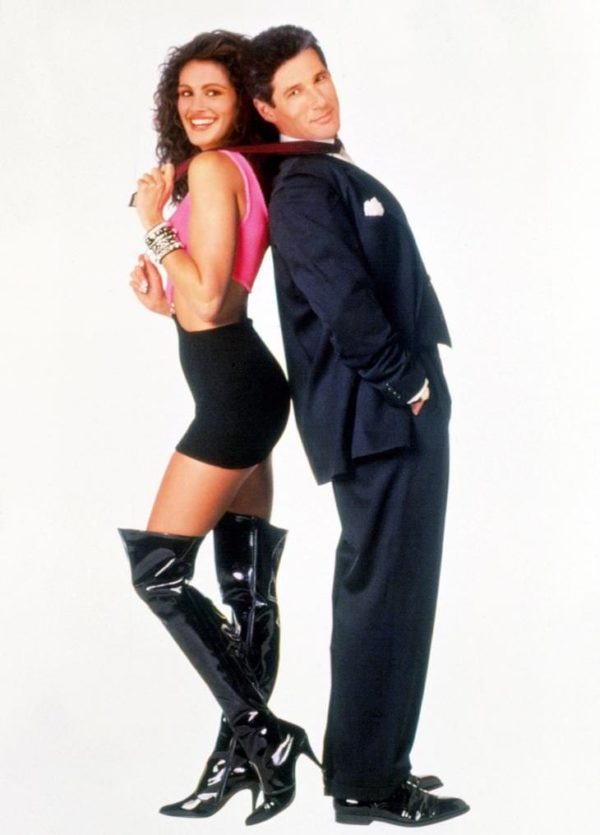 Although it might never be known who took the decision, it’s the body of Julia Roberts’ body double, Shelley Michelle, which appears in the photo. She even stood in for Roberts during some of the movie’s scenes. Richard Gere’s hair was also retouched for this promotional poster – he’s actually got gray hair in the movie.