CHRISTIANITY ON T.V. by Des Kelly ‘the Star of eLanka” 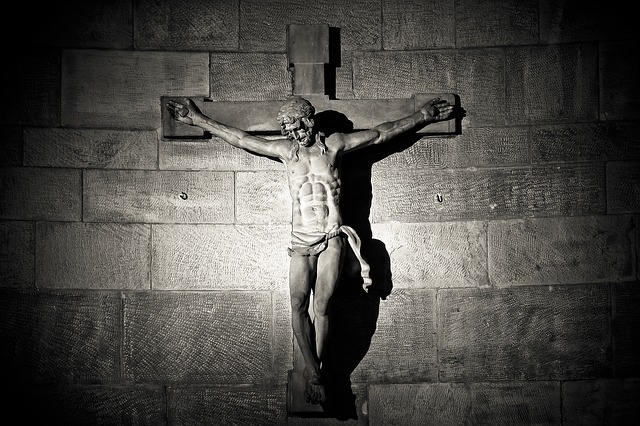 Easter tidings are almost upon us. Another long-weekend “holiday” in Australia, our “adopted” Country, is just about due. Recently, also, I have been very critical about the “content” offered to “free-t.v. viewers, myself included, BUT, most of the “articles” I write nowadays are actually based on television programmes that have “caught my attention”, written of course, especially for Lankan/Australians, here & there, and everywhere, as a matter of fact. Everyone who is “Internet-savvy” IS able to read, and hopefully COMMENT, “on-line”, (e’Lanka) is my choice, as the obvious & best website available, right at the moment, but, for “older Lankans” & others who know of no other “nets” but the mosquito, fishing, or hair-net ones, our Melbourne-based Sri Lankan Newspaper, the Lanka Times, is always available if anyone wishes to look for it. One way, or the other, Lankan/Aussies, will be able to keep abreast of what is happening around the World, a World, unfortunately, now, in a turmoil that only GOD will eventually be able to “fix”.

This gets me back to “CHRISTIANITY ON T.V” . Firstly, let me STRESS, the fact that Australia is a CHRISTIAN-COUNTRY. We believe, or SHOULD, in the ONE GOD, who sent his Son JESUS CHRIST down to Earth to suffer & finally die on a wooden cross, on a hill at Calvary, for US, because, every one of us is a SINNER, (show me the person who says that they are sinless, and I will simply tell them ” go, look at yourself in a mirror and the mirror will tell you that you are a liar.! ), only GOD KNOWS that all of us need to be “saved.”The Miracle-Saviour” was His Son who died on “Good-Friday”, rose from the dead & was resurrected on the following Easter Sunday. Even though all of this did happen, old SATAN came back to RULE & RULE, & he does, winning many a “battle”, only to LOSE THE WAR itself, with the “second-coming” of Christ, as ordered by God, the Father, in the near future (hopefully). This will be the FINAL ARMAGEDDON, because, as this “mere-mortal” has always imagined God to be on prolonged “annual-leave”, HE hasn’t, of course, but, even “THE LORD” GOD must be getting fed-up the present situation on Earth. As the saying goes, “too much of anything, is good for nothing”.

HE has already had to kick Satan & his followers out of Heaven because they were trying to be too smart and disobey Him, HE then created everything, widely known as the UNIVERSE, and don’t let ANY Scientist tell you otherwise. The “Big-Bang” happened ONLY after GOD ordered it to happen He did not want Earth to come into being, with just a “whimper”. Then He created Adam & Eve (symbolically, Man & Woman) put them into the “Garden of Eden”(symbolically, Ceylon), ordered them to eat any fruit except the “forbidden one”(symbolically, the Apple), & who, then comes into this picturesque scene? , Satan, the devil, posing as a snake (who,symbollcally, he was), & who then tempted Eve (the the better-looking one), then shortly afterwards urged Adam to “take a bite” also, only to be thrown out of Eden by God, after which this unfortunate pair created the two brothers Cain & Abel but even these brothers could not exist peacefully. Cain got jealous of Abel and killed him. While all this was happening, God was busy creating other “people” such as “Lot” & crowd who displeased Him a lot (symbolically, as his name itself, was), & so God turned that “lot” into pillars of salt. God,then created a bloke by the name of Noah, one “good apple” in a bag of rotten ones, helped him to build a huge “Ark” and guided Noah, his immediate family and “pairs” of every animal on Earth in, (even then, animals were much better than human beings), to escape forty days and nights of a mammoth “flood” This, then, was the beginning of Earth, as we know it. No-one knows who God is, but as I have said and written many times, “GOD IS” the one & only SPIRIT who is also known as the CREATOR because of the fact that it was GOD who created everything. It said so in the little book called the”Catechism” that I read & studied as a little boy. This little book, in simple terms, explained to me what Catholicism was all about,how, I should attend Church every Sunday & even why I should think about becoming an “Altar-Server”& later, perhaps a Priest.

Because of this, although a “good Catholic” I was not, a true Christian believer, I surely am & I do not need a miracle to tell me that the only “Faith” is well & truly Christianity.There have been many miracles that we Christians have heard or read about. Jesus Christ himself was responsible for many, Saints also, have performed miracles albeit through the hand of God, Matthew, Mark, Luke & John, although illiterate to a certain extent WROTE the Bible, also better known as the “WORD OF GOD”. However, it is the “Original” Roman Catholic Church that is most reluctant to consider “anything” a miracle until it has 100% proof many times over.

The mere fact that I am able to write all this however, IS a miracle. Unworthy, though I am, the good Lord has given me many “gifts”, one of which is putting down on paper what I feel in my heart. My basic education was just that. Basic, in every sense of the word. LIFE has been my education & GOD gave me this life, something I am truly grateful for.

Talking (or writing) about Christianity on T.V., let me finally get back to the T.V.section of this story . It was only yesterday, Sunday, the 9th of April, on Channel 7, at 7pm, former television “front-man” Michael (Mike) Willesee came back to “present” a show on which a “statuette” of a tormented, thorn-crowned face of Jesus Christ is seen shedding tears and seeping blood at times. This is happening NOW in Argentina.

Also, a little white “host”, cracked, broken up and lying in a hand-held container, bloodied & red, resembling blood. We have all heard “stories” like this before, but for Michael W. (a self-confessed “sceptic”) to still be chasing answers to these “Miracles”, 20 plus years after he was first given the “job”, there HAD to be something that was worthwhile watching, and watch, I did, to see the “tears” of Christ rolling down his blood- stained face, his eyes, on this miraculous Statuette showing the absolute torment he must have gone through. I say “Miraculous” because when “Jesus” was then taken to the most modern M.R.I. technology available presently in Argentina (where M.W. went to check it out), ABSOLUTELY NOTHING appeared at all, internally, on the Statuette, to indicate that a “hoax” was possible. Swabs of the “blood” taken from the Saviour’s face was thoroughly checked for D.N.A.

Once again, NOTHING! D.N.A., people, the most modern technology that has EVERYTHING to do with blood. Now, if this isn’t a miracle, I don’t know what is. Stranger still, was the “other miracle” that Mike was checking out. It seems that a discarded “Communion Host” was immersed in a little container of water to cleanse the fact that it was discarded. When this was “checked” !the next day, this little white Host had miraculously broken up, split in the middle, & behold! , obviously “bleeding”. Roman Catholics consider this little “Consecrated Communion Host to symbolize the “Body of Christ”. Wine, Consecrated & held up by a Priest in a “Chalice” at “Mass” symbolizes the actual Saviour’s blood. Catholics thereby, receive the Body & Blood of Christ in the “Sacrament of Communion.

Even STRANGER was the fact that, as a little boy, about to receive my “First Holy Communion”, a beautiful Sinhalese Nun took me aside and told me something I will never forget, especially when, about 70 years later, I was to witness a similar miracle on T.V. in Melbourne. It was at the Convent of Our Lady of Victories, in the.little Suburb of Moratuwa.. This Nun said to me “Desmond, when you receive your first Communion, let the “Host” melt gradually in your mouth. Do not bite the little Host. If you do, it will start bleeding & you will never be able to stop the bleeding”.

I was only about 8 or 9 at the time, received my first Communion, was able to get it “down” without biting it, but was always “afraid” to go through the procedure again, in case I would be the cause of non-stop bleeding of a “Communion-Wafer”.

Now this! , a bleeding Communion-Host shown to us all, bleeding with what was akin to human blood, swabs of which again, present no D.N.A.whatsoever.
All of us who have seen Michael Willisee on television do know that he has been a well-respected “Journo”, for many years, sceptical to the utmost, on matters such as this, but looking at him in certain “scenes” of this amazing documentary, the “stunned-look” of this previous “sceptic-stellar”, is difficult to miss.
And so, readers, friends & Countrymen, give me, not only your ears, but your eyes as well. Australia is our adopted Country, it is a Christian one, and will remain one, I feel, as long as there is CHRISTIANITY ON T.V.