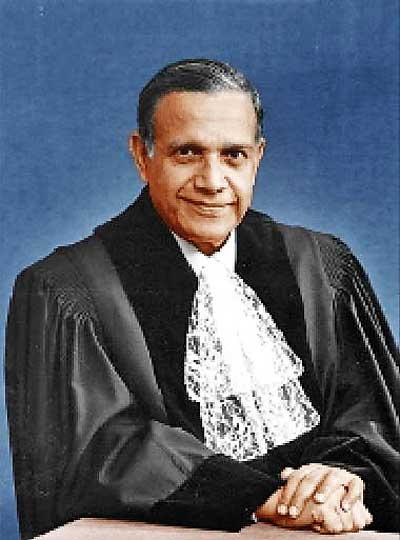 One of the greatest Jurists the world had ever seen was Judge G. Christopher Weeramantry. We lost him on January 5, 2017. What made him great and unique, in addition to being an eminent Judge, was that he had been a scholar of repute, Professor of Law, writer and committed promoter of world peace.
Judge Weeramantry rendered unmatched service to humanity in all his professional life; he spoke and worked for world peace.

His dream was to see a world of peace. His Vision was being pursued by several countries such as Canada, Australia, Japan and Sri Lanka. His life is an excellent role model for today’s youth sans geographical and cultural boundaries. He always loved talking to the young.
Now, he is no more, it is incumbent upon the senior citizens, teachers and academics to share the lessons of his life with students to adopt for themselves ‘To the cause of international peace through cross-cultural understanding’ as he dedicated his book Islamic Jurisprudence; An International Perspective.’
Judge Weeramantry very much wanted to set up an International Peace University and locate it in Sri Lanka. As he told me, with his international connections, he could have got the support of reputed jurists from all over the world and select the best of academics to serve in such a University.

“Judge Weeramantry rendered unmatched service to humanity in all his professional life; he spoke and worked for world peace”

Sadly his dream did not materialise, principally due to the failure of support from those in power and positions.
His Judgements, opinions expressed on various issues, in publications, lectures and keynote addresses given to eminent men and women all over the world stand testament to his erudite scholarship and his extraordinary ability to interpret the underlying philosophy of legal principles, congruent with the teachings of global religious and cultural wisdom. He was the first-ever Judge to bring the religious principles and teachings into the Judgements of the International Court of Justice. Further, Judge Weeramantry in many of his publications, argued that this notion needed to be widened – its scope for the peaceful co-existence of all religious and cultural groups.
This was vitally important for many countries where all major religions are vibrantly practised. Perhaps, this could well be the guiding principle to mend the disturbed multicultural and multi-ethnic society of Sri Lanka.
At the International Court of Justice, Judge Weeramantry derived in several of his deliberations, the legal principles from religious and cultural wisdom.

He essentially extracted and interpreted these cultural notions in his Judgements. In many of his opinions, he quoted from the rich principles of Islam, Hinduism, Buddhism and Christianity and highlighted the traditions of other cultures. In his last days from the hospital bed, he completed the last piece of work on the Lord’s Prayer.
So much was his commitment and dedication to sharing and contributing to knowledge.
Judge Weeramantry was always concerned about world peace and the threat to it from various quarters. He feared and expressed in many of his conversations that, should a war take place, there will be a rain of nuclear bombs.
Needless to say that the world is not strong enough to withhold such devastation. God forbid that day doesn’t come, although it appears to be nearing!
The author can be reached by email; sacmzuhyle@gmail.com.