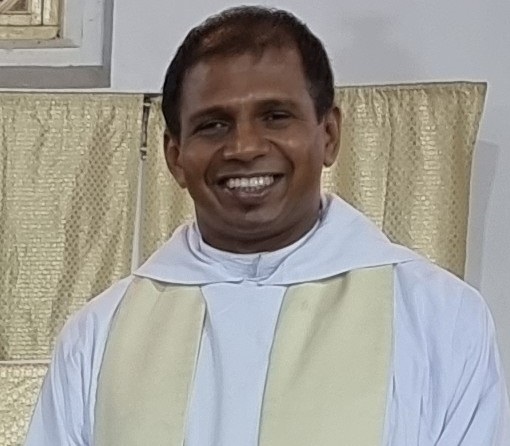 The Venerable Samuel J. Ponniah, an old boy of the College and a member of the Class of 1995, has returned to his Alma Mater after being appointed as Chaplain of College from 1st January 2022.

Father Sam has a long-standing relationship with the school stemming back to when he was a student during the 1990s. During his student days, he represented the College in Table Tennis and was a member of the Hewisi Band as well as being Secretary of the Classical Association and an Altar Server in the Chapel of the Transfiguration. He was also an active member of the College SCM.

On completion of his A/Level, Father Sam began serving College as a member of the tutorial staff initially on a voluntary basis from 1995 before joining the faculty on a full-time basis in 1996. He taught English and Divinity during this period and was also the Master in Charge of Under-15 Cricket as well as Senior Boarding House Master from January 1998. He was also a Lay Assistant in the Chapel of the Transfiguration from 1996 until his departure in 1999 to pursue theological studies given his desire to serve as an ordained Anglican priest like his father.

He then had a stint as Vicar of Christ Church Galkissa (Dehiwela) from 2011 to 2016 while also serving as the Bishop’s Chaplain to the Church of Ceylon Youth Movement from August 2006 to December 2016. During this period, he also assisted with teaching English Medium Divinity at STC for the College Forms and the Upper School on a voluntary basis. Teaching is a gift with which he has been endowed.

He was appointed Archdeacon of Jaffna from January 2017 and served in that capacity till December 2021 during which time he was also Manager of St John’s College Jaffna and also Acting Principal during an interregnum. He has now returned to where he started when he was appointed to succeed Rev Fr Amal Fernando from 1st January 2022 – a real homecoming!

We wish our new Chaplain all the very best in his new and, from what we have seen, demanding role for which he has had ample preparation in his ministry thus far. We welcome him and his family – his wife Roshini, son Gabriel (an Upper VI student of College) and his daughter Anaiyah, back to the wider family of STC.