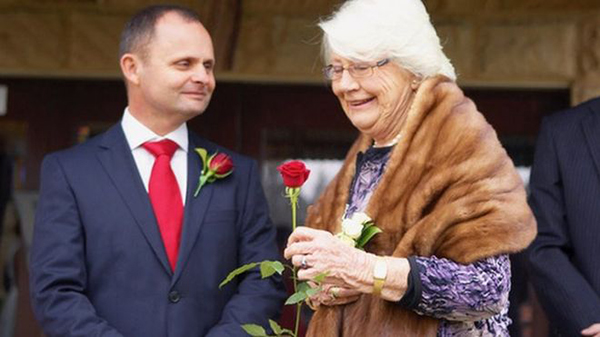 Andrew (left) could not attend his mother’s funeral

Last Thursday, Andrew Leslie, 52, woke up at 04:30 BST at his east London home for his mother’s funeral. It was taking place some 10,000 miles away in Sydney, Australia.

Australia’s strict coronavirus rules left Andrew, an IT worker, unable to get a flight home in time. He had no choice but to say a “surreal” goodbye to his beloved 92-year-old mum, Helen, via an online live stream.

“I really cannot describe the sadness and grief I’ve felt over the last few weeks, we always thought we were only 24 hours from being home,” Andrew says.

When his mother was taken to hospital after a fall four weeks ago, Andrew and his wife, Anu, 49, searched for flights to Australia, only to find that by the time they could fly there, and finish Australia’s mandatory two-week quarantine, they would still be “weeks too late” to see his mother.

Heartbroken at being separated from his mum and four siblings in Australia, Andrew and Anu recorded video messages for his sister to show Helen before she died.

“We told her how much we loved and missed her, and talked about some of the happy memories we’d had together,” he says.

After a “very emotional” funeral, Andrew is still struggling to come to terms with his mother’s death. “I don’t know if we’ve really dealt with it from here, it just feels too detached”. 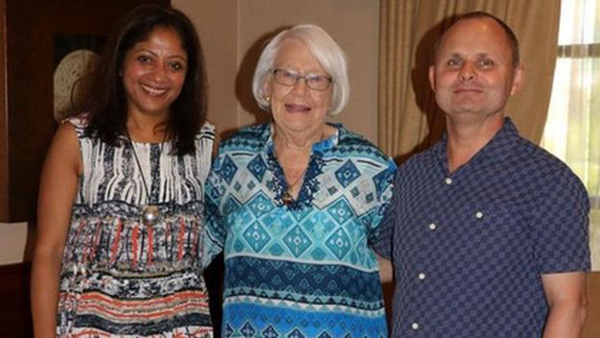 Andrew’s experience is one of thousands of stories of heartbreak, anger and separation – after Australia adopted some of the toughest travel restrictions in the world.

In March, its government urged Australian citizens and residents living overseas who wanted to return home to do so as soon as they could.

Days later, the country closed its borders to everyone except Australian citizens and permanent residents. 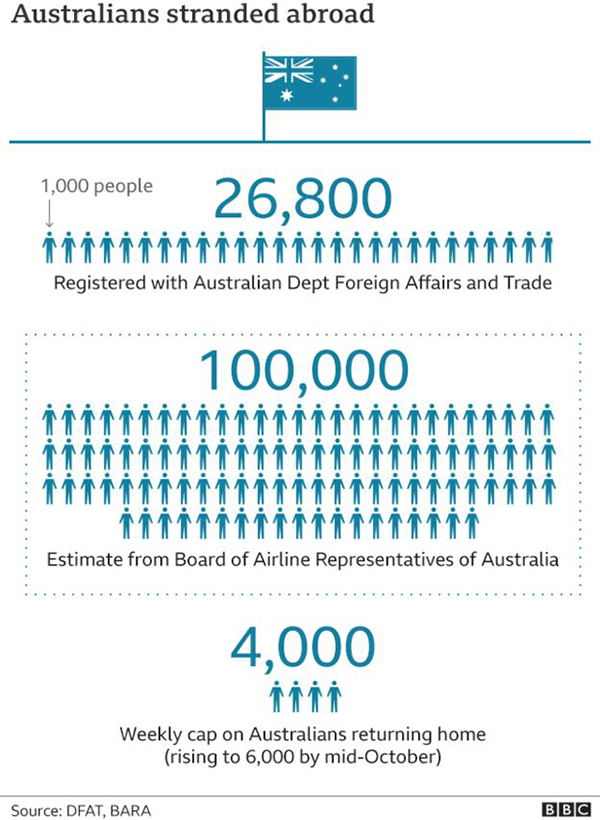 The government has restricted people from leaving the country without an exemption, and few are given. All arrivals into Australia must quarantine in a designated hotel for 14 days, at a rough cost of about $3,000 (£1,650) per adult.

Australia also brought in strict limits on the number of arrivals allowed to enter the country – with a cap of about 4,000 people per week. And airlines – who must comply with the caps – have been regularly cancelling flights and tickets.

‘I was told to find a homeless shelter’

For Sandi James, a PhD researcher, qualified psychologist and teacher, what was supposed to be a 10-day working trip to Dublin has turned into months of being stranded in the UK with no job or stable accommodation.

Sandi, 51, travelled from Australia to a conference in Dublin in March, where her wife Jennifer, 54, joined her from Thailand.

Sandi was then due to travel to Malaysia for work – but says hours before she could board the plane, the country closed its borders. Thailand did the same that month. 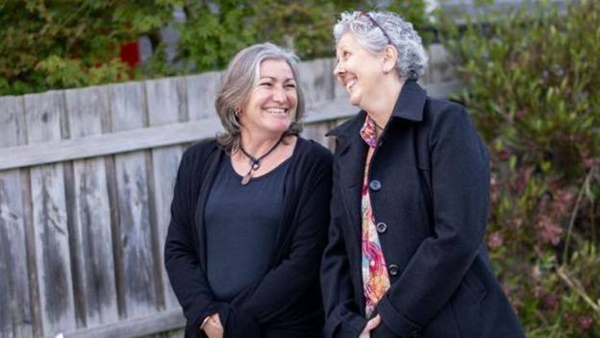 Sandi (left) and Jennifer (right) got married in Australia

Sandi travelled to London after being offered a room to stay in while she was waiting to return to Australia. She tried to book a flight home in April, but the earliest she could get one was 6 July.

With no job or permanent place to live, she phoned the Australian High Commission in London for help, but says they told her to contact a local council about homeless accommodation. “I hung up the phone. I just couldn’t speak. I wanted to scream at them.”

The Commission did not respond to the BBC’s request for a response to this claim.

After her first flight was cancelled, Sandi was unable to take another last minute flight and says she has “given up” on trying to get back to Australia.

Sandi, who is currently staying in a hostel in Bristol, says the whole ordeal has severely damaged her mental health. She has now started the expensive process of applying for an ancestry visa in the UK, in a bid to secure work, and hopefully bring Jennifer here.

“I am stuck here alone, and am really struggling. I can’t do this on my own anymore, I need her.” 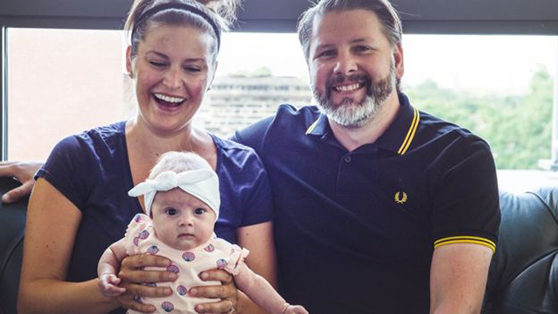 Carly and her husband with their daughter, Ailish

For first-time mum Carly McCrossin, 38, every day her five-month-old daughter, Ailish, grows is a heart-wrenching reminder that her family back in Australia are missing out on those special moments.

“I was getting so upset, because I would be putting away her new-born clothes,” she says, “and bringing out the three-month age clothes.”

Her mother was due to fly to the UK before Carly gave birth. But during a “horrible” phone call, Carly and her husband, who live in south London, agreed she shouldn’t come to the UK, fearing she may get stranded here – a decision they had just hours to make before the borders closed.

Unable to “do nothing”, she has launched a campaign, Fly the Babies Home, with the aim of chartering a plane to fly other lockdown babies to Australia to meet their families.

With 400 families registered so far, Carly has begun the “slow process of getting things to happen”, including talking to airlines and charter companies. So far the cheapest private charter quote came in at about €900,000 (£497,000) for a return.

The Australian government is due to review the caps on people coming into the country on 24 October and recently said it will increase capacity to about 6,000 people per week. But many stranded Australians say this is not enough.

And it could be too late for Carly. She had planned to fly home with Ailish in October for three months before returning to the UK in January.

Instead she’s left looking at baby clothes that no longer fit her daughter. “I just kept asking myself, how has my mum not seen my baby?”