by Desmond Kelly “the Star of eLanka”

DISCRIMINATION, THE SCOURGE OF OUR GENERATION
AGAINS’T COLOUR, CREED, GENDER & “STATION”
SHOULD NOT BE HAPPENING IN THE AUSTRALIAN NATION, BUT, WHAT DO WE DO ABOUT THIS ABERRATION? !, NOT MUCH, BY THE SOUND OF IT.!.

In better days, in Ceylon, the popular adage was
“WOMEN FIRST, EVEN TO THE GALLOWS”. Women were, after all, “The weaker sex”, “The fairer sex”,
“The better half”, etc.,etc.. Men were supposed to “look after them”, “open doors for them”, “carry bags for them” &.generally treat them like the QUEENS they were.

Men, on the other hand, in Ceylon, anyway, either drank, smoked, gambled & chased hot, wild, women, (most times, all four). Many of them could afford to participate in all these nefarious activities because they were paid higher salaries than the women who “worked” both “at-home” & “at work”to help out in the financial set-up. Just imagine that!. Men got the bigger pay-packet & still do!, I am given to understand, which I don’t!! Why should women STILL go home poorer than the men, even though they do the same work and are generally smarter than “the old bloke”?!.
This has been happening for decades in old Ceylon, now, Sri Lanka, and, for many years in Oz. too.. It looked as if it would never end.

Then, the womens’ equality measures suddenly came to the fore. Not only did they come first, second, third & fourth, they are now heading for the fifth rung of the equality ladder. One of Australia’s richest persons is a “woman”, some women here hold the most important “jobs” , both in & out of Parliments, we have more “woman-Judges”, more woman-C.E.O’s, more woman-Doctors, BUT, as THEY say, their male-counterparts still earn more money, even in the present tense (and becoming quite TENSE, as a result) EVERYTHING STILL FAVOURS THE MALES . They still hold the “roost”
But, hang on for just awhile folks. Discrimination is now rearing it’s ugly head again & I really want to write much more about it but, as another famous adage says
” A PICTURE IS WORTH A THOUSAND WORDS”.

Will it ever end? 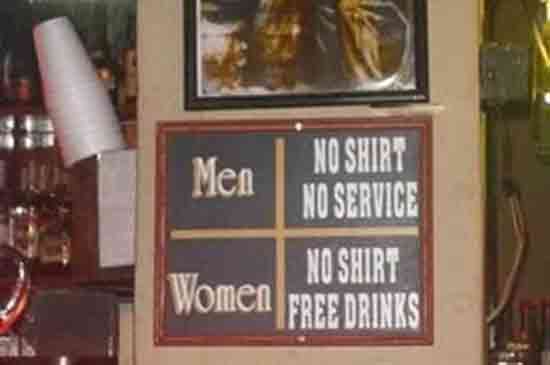