He was very emotional and his heart was full of mercy towards others. But he stands firmly like an unshakable boulder and a tough character

I first met Dudley Senanayake in 1970. Despite the heat of the colossal defeat of the so-called National Government led by Dudley Senanayake still brewing, I met him at his Woodland’s private residence along with a group of students from Ananda College Colombo.

In that era, there were students of Ananda College who were attending classes conducted by the Communist, Sama Samaja and JVP parties. As we did not accept their principles, we formed into a group ourselves identified as the Democratic Students’ Organisation.  With the belief that the UNP at that time professed the same ideologies as ours, we thought that meeting Dudley Senanayake would go a long way in fostering this relationship further. We placed before him our demands. 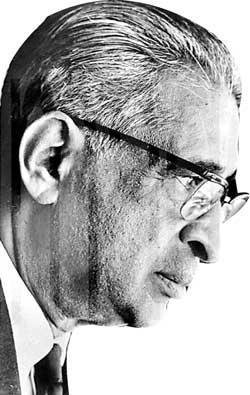 His response was, “You are now at schooling age. It is too early for you to get involved in Politics. Study well. After you finish your graduation, you can do politics. When that time comes I will give you a good opportunity for that”. From these words, it was very much evident the degree of sincerity and honesty he possessed. He had no intention of using students as political pawns.

Not feeling dejected by his response we firmly declared our position.

“If you remain in this stance, without any difficulty very soon this country would become a Communist country. Extremist ideas would creep into the schools, and would attempt to brainwash these students with these ideologies”.

With this retort of ours, we felt that our deliberations had an impact on him. He replied, “Just give me two weeks I will think over this matter and meet your children again”.

Before the end of two weeks, we received an invitation from him. For this meeting, there were several others. In addition to Jinadasa Niyathapala the General Secretary of the Youth Front of the party who was present at the initial meeting, Professor Thilak Rathnakara, J. R. P. Suriyapperuma and young University Lecturer Karunasena Kodituwakku.

“We have given serious consideration to the facts stated by you, children. As a party it is not our intention to start a Student organisation. We have decided to support the Democratic Students’ Organisation started by you. From henceforth, we have appointed this foursome who would guide you and extend to you whatever support you need”.
The rapport we built up with Dudley Senanayake was the beginning of a long political journey. Even today in my Political career, my ideas are from my father and Dudley Senanayake. Who was of exemplary character. His simplicity, honesty and his simple lifestyle won him popularity among the masses that he loved much.

As a young politician, he played a dynamic role and was active in the scenario of gaining Independence for Sri Lanka together with his friend J. R. Jayewardene. He was firm in the decision of extending support for Japan in the aftermath of the Second World War in spite of opposition from the British Empire.

Being appointed as the First Minister of Agriculture and Lands in Sri Lanka, his primary challenge was to implement the Gal Oya multi activity project which came under the first Sri Lankan Multi activity project Gal Oya. Under the Gal Oya project, the largest reservoir ever built in Sri Lanka with the capacity of 770,000 acre-feet of water was the Inginiyagala Senanayake Samudraya, which provided water to 120,000 acres of Paddy lands to be cultivated for both Yala and Maha seasons.

Hydro-Electric power generation was also established in order to provide power for the area and a foundation was also laid to establish a Sugar manufacturing plant aiming industrial development. Ampara District became the largest Rice producing district with the irrigational facilities provided through the Gal Oya Project.   In addition to Gal Oya, the foundation for Uda Walawe Multi activity project was also laid as proposed under the six-year development plan envisaged in the first Budget of 1948. The restoration of ancient tanks Kantale, Allai, Kandalama was also initiated during 1947-1952.  The establishment of Agricultural Research Centre’s in Mahailluppallama, Ampara, Bombuwala and Kantale were also undertaken during that time and the setting up of Bathalagoda Central Rice Research Centre is also noteworthy. The farmers today are benefitted from the high-quality seeds that these Centre’s supply.

During 1965-1970 period under the leadership of Dudley Senanayake and when Mr. M.D. Banda was the minister of Agriculture “the green revolution” in Agriculture was set in motion and the yield of Paddy per acre at that time increased one hundredfold. The total rice production which stood at 36.3 million bushels in 1965 became   77.4 million bushels in 1970 showing a remarkable increase by 100%. Moreover, during this era in order to achieve success in this endeavour, I remember how Prime Minister Dudley Senanayake deployed the “Young farmers Army” or Tharuna Govi Hamudawa which had been started by Captain C. P. J. Seneviratne.

Schemes and projects that were initiated before 1956 included Agrarian Colonies and Irrigation Reforms, construction of a fully complete residential University in Peradeniya, establishment of Central Colleges and Technical Colleges island-wide, construction of the New Kelani Bridge and other bridges and also the construction of Kankesanthurai Cement Factory, Chemical factory in Paranthan, Valaichchenai Paper factory and Sugar Factory in Hingurana. These were all constructed prior to 1956 out of our own resources and not from any foreign aid or loans but from our own export earnings.

In the aftermath of the communal uprising in 1956 in building again national reconciliation Dudley Senanayake formed a “National Government” for the first time in the history of independent Sri Lanka in 1965 by including the Federal Party, Tamil Congress, Ceylon Workers Congress and all parties which represented the Tamil nationals in this National government. Going further Philip Gunawardena who was known as the father of Marxism was also included in his Cabinet of Ministers. Others were J. R. Jayewardene who was known as “Yankee Dickey” and who introduced to entire South Asia including Sri Lanka the ideals of the “Free economic reconstruction” and Sinhala extremist couple K.M.P. Rajaratne and Kusuma Rajaratne. Dudley Senanayake was successful in keeping them under his fold. He went further in obtaining the support of I.M.R.A. Iriyagolla and W. Dahanayake and by continuing to hold power uninterrupted for five years, proved his expertise and statesmanship by remaining impartial in all his decision makings. It was crystal clear in the economic principles of Dudley Senanayake that he always felt the need to provide sustenance with the provision of aid and assistance to the farming community, the small businessmen and also the have-nots who could not face the challenges of Market competition on their own. It clearly revealed that he was not a Liberal Democrat but a socialist Democrat. Even though the opportunity was given for free market operations he ensured that there was no victimisation for the severely affected sections in such a competitive environment, by providing protection to these sectors. He bore an exemplary character, anyone could learn lessons from it even today.

I also remember one incident which was related to me by Dr. Karunasena Kodituwakku.
Once he had visited the house of Philip Gunawardena who was sick and who was at one time the Minister of Industries. Philip Gunawardena had called to memory the acquaintance he have had with Dudley Senanayake.
“Karu Dudley is a great person as well and a leader of the people. I worked with him only for a very short period and I feel now the period I did not work with him as a time spent in vain. If I got the chance to continue working with him I could have done much more for the people”. This was the character certificate Philip Gunawardena a strong leftist of Sri Lanka issued on Dudley Senanayake. I will conclude my epitaph on the life and times of Dudley Senanayake by quoting a few lines from Sri Chandrarathna Manawasinghe.

“Dudley was too good. Most of them say. It is true but not complete. One can peel a stone to obtain its bark but it was more difficult to get Dudley to change his own principles.  He was very emotional and his heart was full of mercy towards others. But stands firmly like an unshakable boulder and a tough character”.

We are living in an unfortunate period miserably. There is no difference between the fortunes of entering an Oasis in a desert and joining hands with an honest leader.