“FOUR-SCORE +ONE YEARS AGO, TODAY” – By Des Kelly

In the context of time, this does not seem so very long ago, but the sad fact of the matter is that this catastrophic event did occur in Australia. As my readers will see, it was not called “Black Friday” for nothing. The primary causes for this tragic day were no different then. The results of this unfortunate day, occurring on Friday the 13th, a very bad beginning of a weekend of ANY MONTH, to those who chose to be superstitious, were so horrific, the word “Apocalypse” would have well suited the sad, tragic, situation, at the time. Yes, Australia was “burning” then, and now, it was happening again, 81 years later, with the same ferocity, borne out of beastly drought that has seemed never-ending, for months, even before the birth of this new decade 2020.

There is no need for me to “carry-on” about it, but there is an extremely important “point’ in my story. The damnable drought that huge areas of this Island Continent were experiencing, with Farmers by the score, deciding that enough was enough, led once again to bushfires which, as on Black Friday,  threatened to burn Australia into it’s already bone-dry grave, infrastructure, flora, fauna & ALL.

Rainfall was just wishful thinking, on the part of Scientists, Professors, Weather-Experts, Rain-Dancers, the LOT !!.

Bushfires had the added help of arsonists, burning  out habitats of Australian animals, killed thousands of them, and even more sadly taking the lives of several brave people who were trying their very best to stop the carnage.

Because of the hot dry conditions, fires kept starting off automatically, aided by lightning strikes, and although the

Fire-fighters, hundreds of willing volunteers, and even the Armed Forces who were called out finally, by the Government, did the best that they could do, under the circumstances, new bushfires kept springing up, burning up areas in Australia that were equal in size to some entire Countries on this Planet. If they were not burning, many Suburbs and Towns, for thousands of kilometres around,  began to be blanketed by a smokey haze, sometimes lasting for days, again causing illness, especially among asthmatics

Still, no rain, and then it was suggested that EVERYONE started PRAYING to GOD for this life-saving fluid. There was no-one else to turn to. Christian people from all over the World started praying to the Almighty, and this is my point, folks, GOD HEARD ALL THE PRAYERS, and decided to send down the RAIN needed to fix everything.

It is as simple as that. ALL THE “EXPERTS” can go take a jump, as far as I am concerned. We, humans are to blame for everything we do, in our ignorance,  to hurt Mother Nature. We cannot fight this Mother, when she retaliates,

ONLY GOD CAN CONTROL HER, AND, ONCE AGAIN, HE HAS. Now, let us go down on our bended knees and THANK HIM. We are all just mere mortals, folks, very lucky indeed to be looked-after by a merciful GOD, so thank you, LORD, for saving Australia, the second time around.

13th JANUARY, 81 YEARS AGO WAS KNOWN AS ‘BLACK FRIDAY’ – AUSTRALIA – today it has a different and dangerous name….. 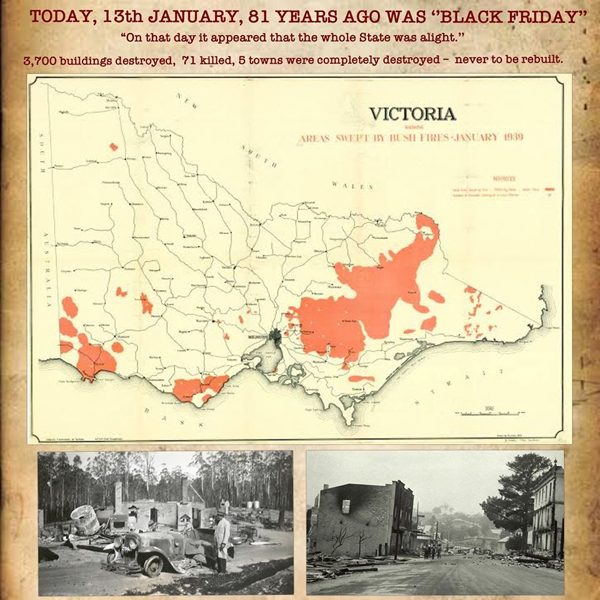 On this day, Eighty-one years ago (13th January 1939) with temperatures above 110 F (45°C) across Victoria and the state in drought, bushfires consumed 3,700 buildings across the state, 71 lives were lost and 5 towns completely destroyed– never to be rebuilt.

“There had been no fires to equal these in destructiveness or intensity in the history of settlement in this State, except perhaps the fires of 1851, which, too, came at summer“culmination of a long drought”.

‘’At midday, in many places, it was dark as night.  Men carrying hurricane lamps, worked to make safe their families and belongings Travellers on the highways were trapped by fires or blazing fallen trees, and perished. Throughout the land there was “daytime darkness’.’

“The speed of the fires was appalling. They leaped from mountain peak to mountain peak, or far out into the lower country, lighting the forests 6 or 7 miles in advance of the main fires.  Blown by a wind of great force, they roared as they travelled. Balls of crackling fire sped at a great pace in advance of the fires, consuming with a roaring, explosive noise, all that they touched.‘

‘’On that day “it appeared that the whole State was alight.”

NB : Every child in every Australian school should be taught about the events of ‘Black Friday’ 1939 to give them an understanding and appreciation of the extreme danger of the Australian bush. However keeping them ignorant of Australia’s bushfire history makes it far easier to radicalise them and recruit them into the Climate Cult.

“The most effective way to destroy people is to deny and obliterate their own understanding of their history.”

And yet today we are being told by our leaders that this is the NEW NORMAL???

Oh, no, this time is DIFFERENT —- now we are being brainwashed into believing the GOSPEL of the NEW religion of CLIMATE CHANGE!!

Those who ignore history are bound to repeat it – only this time it has a new and dangerous name, and a global religion behind it.  The altar has been built and our gullibility is about to be offered upon it!!