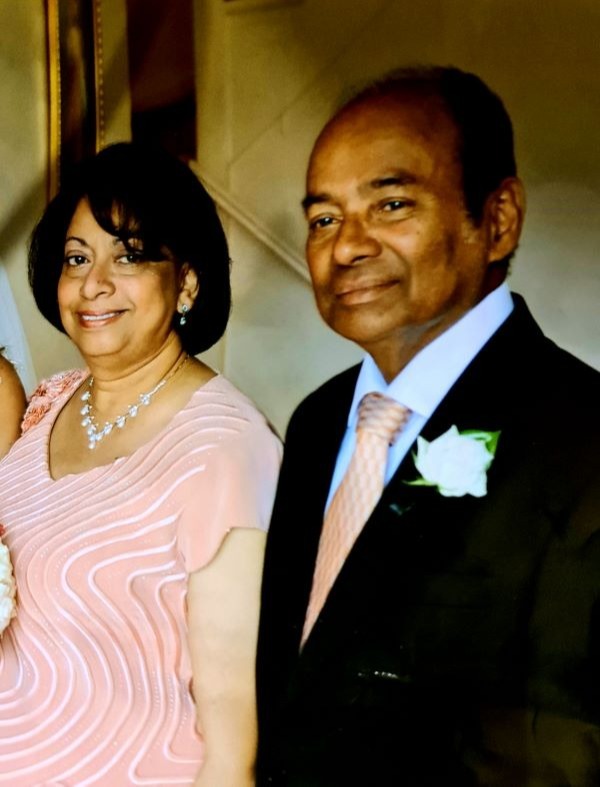 Milroy Captained the College Cricket team at a young age of 17 and excelled with the bat and was awarded best allrounder of the year. He continued his studies

at the Advanced Level University of London, at Saint Benedict’s College and Passed Part One and Part two of the ICMA London. Milroy’s Brothers Rev Fr Angelo Martyn is now In Sri Lanka at the Ampitiya Seminary after Mission service in Bangladesh for Thirty years and Rev Fr Tony Martyn was Assistant Secretary to the Bishop’s conference in Sri Lanka. Milroy’s Mother Died recently at the ripe old age of 102 and she was president of the Legion of Mary of the Parish of Nugegoda and a founder member of the women’s league of the Parish. Milroy’s father  Terrence Martyn was employed at Julius and Creasy a reputed law firm of Fort. Milroy was 28 years of age when he met Jacinta Ratnayake.19, Whose mother Bertha Heyn was the sister of the Sri Lanka’s famous Brigadaire Russel Heyn who captained the Sri Lankan Cricket team and whose sons David and Richard who also represented The Sri Lankan Cricket team. Milroy and Jacinta’s courtship was a whirlwind one. They met in June proposed in November and Married in December all in six months. Milroy gave Jacinta three days when he proposed to her and said If he was turned down he would fly away to Australia. She accepted the proposal. Milroy was Assistant Accountant at Sir Cyril De Zoysa’s Associated Motorways Union Place after having worked at Colombo Commercials Union place for ten years. Milroy captained the second eleven Cricket team of the company. The urge to forge ahead in a foreign country Canada was beckoning. Jacinta’s Uncle Victor Heyn generously sponsored them to migrate to Canada thanks to his Italian wife Gianna who cared for Milroy Jacinta and new born baby Michelle were able to adjust to a new country. Within weeks of arriving in Canada Milroy was employed at Campbell Manufacturing Company in the Accounts receivable department and quickly become Credit Manager. From then on it was smooth sailing, Milroy joined a very Large Telecommunication’s company Bell Canada employing over 50,000 employees. Jacinta too was employed at another branch of Bell Canada known as Tele-direct. Milroy was very active in social justice issues and was elected Secretary of the CTEA Union of 2000 employees. Milroy continued his Accounting Studies and acquired a Diploma in Accounting Canada. By Now Milroy and Jacinta had two Children Michelle and Melissa. Having lived in Canada for nineteen years Milroy and Jacinta ever courageous and daring ventured to Migrate to Australia. Thanks to Jacinta’s Brother Anthony Ratnayake who was Managing Director of P&O international who secured an Assistant Accountants Job at P&O Australia Milroy was able to secure employment on arrival in Australia. Jacinta secured employment at Telstra Australia. Michelle in the meantime pursued her studies in Australia and graduated with a Doctorate from the University of Melbourne and was runner up Australian of the year. Melissa their second daughter acquired double degrees in Marketing and finance.

This past year 2021  December 31st, Milroy and Jacinta celebrated a quiet fifty years together of wedded bliss. Due to the rampant Covid pandemic they chose not to

celebrate their wedding Anniversary, however they celebrated it with a profusion of prayer through the day. Well wishers poured copious flowers and gifts. When asked by friends and relatives what was the secret to this long continued marriage the answer was much prayer, the recitation of the rosary, suffering, and the will to win over any obstacle, and heaps of patience and the willingness to please  each other. They were reminded of the homily at their wedding by Fr  Andrew Peter Fernando How much work must each person in a marriage do he said “not fifty fifty but one hundred one hundred.” They now live in a handsome home at 90 David Collins Drive Endeavour Hills and Milroy has contested for election to the Council of Casey and says someday he will be in the Casey Council Chambers as a councillor. Milroy serves on the Justice and peace Initiative Association of Saint Paul’s Endeavour Hills, and is a member of the Frog Hollow reserve Association responsible for revegetation of a natural reserve in Endeavour Hills. The association has planted native trees to the value of $250,000.00 with a grant from the State of Victoria. Milroy has written four books in manuscript form and also over two hundred motivational  poems and was a prolific writer to the Sri Lankan now defunct Newspaper Pahana. Milroy is a Justice of the Peace of the State of Victoria. Australia