My eight hundred cents on the Murali saga, Vijay Sethupathi and cancel culture – by Shehan Karunatilaka 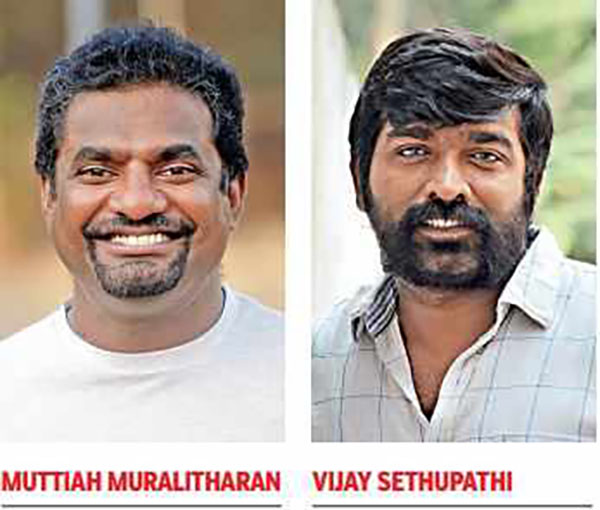 This began as an open letter to Vijay Sethupathi, a man I have never met, but have recently become a fan of. But now Sethupathi is not doing our movie at the request of Muttiah Muralidaran, another man whom I have never met.

I was going to tell Vijay the reasons why I agreed to write a film about Murali and why, as an artist, he should be excited to play the role. But now he has pulled out. Too late.
He has been dismissed from the crease not by the umpire’s finger, but by the boos of the crowd.

I have written an article about the man, a novel where he features and 7 drafts of a screenplay about him. But I still don’t know how to spell Muralitharan or Muralidaran or Muralidharan. Neither does the internet. Neither does my director. If I ever get to meet the man, that would be the first of about eight hundred questions.
This is what I would say to Sethupathi if he was still doing our movie and was open to opening open letters. Or wounds. Don’t cancel the match because a few in that section of the crowd are screaming ‘no ball’.

I agreed to write the movie for two reasons. Or more accurately to answer two questions. Two questions that I wouldn’t have had the guts to ask Murali himself, if I ever met him.
1) What is it like to be called the Greatest Of All Time and a Cheat/Fraud/Chucker by the same set of fans?
2) What was it like to be a Tamil boy in a mostly Sinhala dressing room at a time when the two races were at war?
Here’s the thing about Murali. Many cricket fans (mostly Lankans) think he is a genius. Some cricket fans (mostly Aussies) think he’s a fraud.

Here’s the other thing. At a time when the nation was at each other’s throats, not only did the whole team get behind him, but the entire country did. Both the Sinhala Buddhists and the Tamil Separatists and everyone caught in between. We all united behind Murali’s elbow.

For a writer, this is fascinating man and a mesmerising tale. And for an actor, for someone who sees themselves as an artist rather than a star, this would be the role of a lifetime. That is, if he were allowed to play it.

The script I wrote with director M S Sripathy attempts to answer many other questions. How did a Tamil boy from the plantations whose family business was burnt down by Sinhala mobs manage to play for Sri Lanka and surpass the likes of Ian Botham, Richard Hadlee, Kapil Dev and yes, Shane Warne in the record books? Was his decision to focus on bowling off-spin and avoid politics a wise one, or a callous one?

There are other questions. What did Aussie umpire Darrell Hair say to him afterwards? How many houses has he actually built? How close was that bullet to Kumar’s head in Lahore? Can anyone bowl a doosra, and should it be encouraged?

If this sounds like I am selling a movie yet to be made, that’s because I am. There’s enough story in this thing to fill a test series and I can’t wait to see it put on screen. If they allowed us to.
Sripathy and I were never interested in telling the heroic tale of a great bowler. In doing a puff piece that glorifies or whitewashes. We already know this story from watching test matches and World Cups. We were interested in exploring the many versions of Sri Lanka’s arguably famous Tamil. Arguably? Many things about Murali are arguable and that is what makes this a cracker of a tale.
But we are not allowed to tell it. Because the actor we picked for it is being told that he should not. For if does, he will be a traitor, just like they think Murali is.

If we cannot tell the story of Sri Lanka’s most famous Tamil, are we allowed to tell the stories of the less famous ones? What about the notorious and outspoken ones? If we wanted to tell the tale of Thiruchelvam or Thiranagama or Karuna or Prabhakaran or Kadirigamar or Elara, will the politicians and media of Tamil Nadu not allow us to?

Who made the rules saying actors can’t play controversial figures or perceived villains? Was there an uproar when they gave an Oscar to a movie about Churchill, a man responsible for far more deaths than the LTTE. Arguably.

We can make films about Stalin and Genghis Khan and Christopher Columbus. But not a smiling off-spinner from Kandy who happens to say the wrong things in interviews? Isn’t unravelling complex characters and examining historical legacies what art is supposed to do? Or be allowed to do.

I am not here to defend Murali’s political associations or interviews he has given. I have never met the man and will not to ask him to test his politics in a lab setting, like he did his doosra many times before. I’d just like to pose a few more questions.

Why are we judging an off-spinner by his grasp of politics? Do we judge Narendra Modi by his golf swing or Mahinda Rajapaksa by his goal kicking? No one asks Kumar or Dhoni or Eoin Morgan their opinions on genocide. They don’t even ask Arnold and Mathews, two other famous cricketers, who happen to be Tamil.

The movie I wrote ends in 2010 when Murali takes his 800th wicket. (I’d say spoiler alert, but the title got there first). Which politicians he shares stages with in 2019 is not a topic dealt with in the script of 800. But there is a crucial scene where Murali, on one of his many charity missions for the Foundation of Goodness, meets with the top brass of the LTTE and has a heated discussion on the war. I won’t tell you what happens in that scene, for that would really be a spoiler. But let us make the film and we will show you.

All I will say on Murali’s politics is that to call a man a traitor to his race, a man who has built hundreds of houses for Tamils, made homeless by wars and tsunamis: this is a tad ridiculous. How many houses have the people on Twitter built for Tamils? If I were a homeless Tamil, would I prefer a home or a well-reasoned rebuttal to a Channel 4 question on David Cameron.

Of course, he’s a wealthy man, but no one asked him to build houses or schools or clinics or training grounds. He just did. No one asked him to meet with politicians in order to get them built. But yes, he did that too. Should we judge a man by his associations, his misconstrued words, or by his actions?

Did he speak up enough during his playing days for the thousands of Tamils slaughtered by war? This question is posed in the movie. I am not sure it is answered. I am not sure it can be. But if he had spoken up, would the Tamils have not been slaughtered? If he had spoken up, would he have been allowed to take 800 wickets? Would we be allowed to make films about him?

Should the loudest voices on the internet be able to stop a story being told? Should we allow a story about a very famous Tamil and a very Tamil struggle to be silenced with a tweet? Once the story is told, you are all free to rip it apart. Say it was poorly written, badly shot, hammily acted, that the doosra didn’t turn. Call us chuckers, if you like, that is fine. But don’t condemn a movie before it is made. Don’t deny the creators a chance to explore one of Sri Lanka’s most interesting and divisive figures. Don’t let cancel culture become our latest import from the West.

It will be a cracker of a movie. Yes, I’m selling it now. We can debate whether Murali was a good guy or a bad guy. Whether the doosra was illegal. Whether all Tamils have an obligation to speak out. Or the right to remain silent.

You just need to let us make the film first.