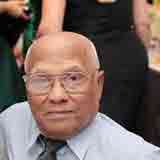 Transcript:
Where did they come?
The Dravidian Tamils & Indo-Aryan Sri Lankans
The term Dravidian is used to refer to all the non-Aryan population in the peninsula of India.
According to experts, the Tamils arrived in India around 3000 B C. Dravidians are believed
to be of African origin.
Some researchers are of the view that some Ethiopians have remarkable physical
resemblances.
So, the belief is that the first people who arrived at India were NEGROIDS, from Africa, with
black skin and curly hair.
The Anthropologists also created a new racial group called the “Mediterranean race’ and
identified the Dravidians came from this race, as the Mediterranean’s origin is black Negroid.
Summarising- Ethiopians in antiquity ruled India, and they were names the Naga.
The Naga’s created Sanskrit writing and language.
Nagas ruled all of India, Sri Lanka, and Burma.
They were a warlike people used bow, arrow, and noose
The Tamil people also known as Tamilar, are Dravidian ethnic group who speak Tamil as
their mother tongue.

They have migrated from Ethiopia and considered a Mediterranean race, occupied whole of
India, and called themselves Nagas.
According to Hinduism Nagas are mythical serpents. In Buddhism, they often are protectors
of the Buddha and of dharma.
According to Dr. Winters: “Naga/Nagash was also the Kingdom or the ancient Semitic
speaking people of modern Ethiopia who lived in Arwe and ancient kingdom of Punt.
So, the history of India dates to 3000BC with the migration of Ethiopian tribes as Dravidians.

These settlers called themselves Nagas tribe.
They would have migrated to the North of the island of Sri Lanka about that time.
Our history of homosapiens or hominins goes back to the Balangoda man lived 38,000 BP
meaning before the common era.
Do Sinhalese come from South India as some Tamil people seem to believe. Most unlikely
from historical evidence. Tamils as Naga tribe have migrated to North India at some stage
can be accepted. According to our historical chronicles and Mahavamsa, Nagas and Yakkas
were inhabitants of the island. So, the Nagas may have been in the island before Prince
Vijaya’s landing in Thambapanni.
Kuveni, also known as Sesapathi, was a Yakshini queen mentioned in the ancient Pali

chronicles Mahavamsa and Dipavamsa, the primary source for her life-story being the former
history mixed with legend. She is venerated as Maha Loku Kiriammaleththo by the Veddahs.

Kuveni, on the other hand, is regarded as a descendant of the demons of the Ramayana and of
Ravana, who also dwelled in Lanka. A common folk tale was that her children did not, in
fact, flee to Malaysia, but instead remained in Sri Lanka’s jungles and became the Veddas –
Sri Lanka’s aboriginal population.
Kuveni helped Vijaya destroy the Yakkha city of Sirisavatthu and has two children with him.

However, Vijaya must marry a Kshatriya princess to be a legitimate ruler. Therefore, he
marries the daughter of a Pandu king, who also sends other women as brides for Vijaya’s
followers. Kuveni and her two children leave for the Yakkha city of Lankapura, where she is
killed by the Yakkhas
Aryans and Dravidians have different accents. Aryans have a north Indian accent
whereas Dravidians have a south Indian accent. Looks-Aryans are fair skinned as compared
to Dravidians. They also set the caste system in India consisting of 4 general tribes of priests,
businessmen and aristocrats and scheduled castes
Sinhalese language and culture came from North India, probably Bengal as Mahavamsa says.
But Hela ethnic groups were living on the island and are the aboriginal inhabitants.
Balangoda Man The earliest evidence of Balangoda Man from archaeological sequences at
caves and other sites dates back to 38,000 BP (before the common era), and from excavated

The information contained in this article is for general information purposes only, and whilst the author will endeavour to keep the information up to date and correct, eLanka makes no representations or warranties of any kind, express or implied, about the completeness, accuracy, reliability, suitability or availability with respect to the eLanka website or the information, products, services, or related graphics contained in this article for any purpose. Any reliance you place on such information is therefore strictly at your own risk. In otherwords, eLanka In no event will we be liable for any loss or damage including without limitation, indirect or consequential loss or damage, or any loss or damage whatsoever arising from loss of data or profits arising out of, or in connection with, the use of this website / article. Also please note that through this website / web page articles you are able to link to other websites which are not under the control of eLanka and therefore we have no control over the nature, content and availability of those sites. The inclusion of any links does not necessarily imply a recommendation or endorse the views expressed within them