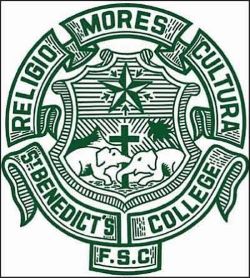 The oldest Roman Catholic school in Sri Lanka, was inaugurated in 1865 by the Benedictine Monks. The school consisted of few classrooms and small staff at first. In 1868, the De La Salle Brothers took over the administration of the college. Since then the school has been headed by many Brothers who belonged to the La Sallian Community.

Presently the college is headed by Rev. Bro. Pubudu Rajapakshe.

The college provides education to around 2400 students with a staff of around 200+ teachers. Students are enrolled from Grade 1 to Grade 13 with the local syllabus in English Sinhala and Tamil mediums. The college maintains a high conduct of Academic and Co-Curricular Activities that encourage students to fulfill their careers in the apt way.

The College staff consists of 200 individuals. Around 2,800 students currently study at the college.

The College Prefects’ Board consists of 50 students who are selected for their all-around performances and contributions towards the college.

The Primary is headed by Rev. Bro. Praveen Vaaz. The 60-member-strong staff provides education to around 1000 students in fields of academy, sports arts, and music.

The Primary section consists of two main buildings, with classroom facilities of up to 40 classes, a library, and a language unit. The Primary also has a Western band, Eastern band, Choir, and Scout Troop on its own. The Primary Prefects board consists of 20 Prefects who attend all school occasions and keep the discipline of the young ones intact.

The St. Benedict’s College Primary is the first such Primary section of a school in the country to have its own basketball court. It also has facilities for Table Tennis in addition to the main sports of cricket, tennis, and swimming.

The Primary section, which is located apart from the college, educates those that enter the school during the initial years. Around 1000 pupils are handled by a staff of 60 teachers. The Primary section consists of classrooms, Library, Computer Laboratory, Music Hall, and an Arts room. In addition, the Primary students are given opportunities in taking part in Cub-Scouting, cadetting, Sports such as Cricket, Basketball, and Swimming, and Western and Eastern bands.

The College Section consists of Grades 6-13. There are also 2 Computer Laboratories, a Library, Music, Dancing and Arts rooms, Physics, Biology and Chemistry Laboratories and a Lecture Hall.

The College owns a Gymnasium, There’s also a Sports-Hostel. The College grounds are situated at Bloemendhal Road, which consists of cricket pitches and turf, Rugby posts, football goals, and Hockey goals. It also provides facilities for various Athletic disciplines.

Within the College premises, the college has two basketball courts, of which one could be used for night games, a state-of-the-art swimming pool with viewing facilities, The swimming pool was constructed in 2010.

115 DEDICATED YEARS OF SERVICE TO OUR ALMA MATER

The Old Boys’ Union of the St. Benedict’s College is one of the oldest alumni associations in SriLanka having established on 14th February 1904 by a group of distinguished past pupils including the first Ceylonese Chief Justice Sir Thomas De Sampayo, Sir Marcus Fernando and Advocate C M Fernando. The first President of the Union was Rev. Bro. Christian who was the Director of the school. Old Boys’ Union have gone from strength to strength with many of the loyal past pupils domiciled abroad responsible in forming branches in Melbourne, Sydney, Perth, Toronto, Vancouver, London, New York, Paris, Dubai, Qatar and California. Perhaps the only school in Sri Lanka that can boast of such a network of alumni branches the world over.