The need for a shift to professional excellence-by Dishan Joseph 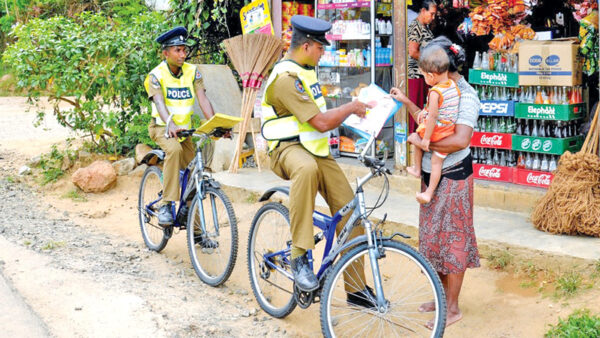 The Sri Lanka Police Service has a heritage of more than 150 years. The Police Force has grown by facing challenges. Advances have been made in technology. The Police Force were actively engaged during the 30 years of conflict. During this time the Police engaged in counter-terrorism operations to support the overall national security objectives. Some Police officers gallantly died in the line of duty. To date 3,100 brave officers of the Sri Lanka Police have been killed in the line of duty.

We must realize that law enforcement duty has obvious risks can cause serious injury and even death. Criminal acts have become violent and calculated. Radicalized extremists have powerfully delivered their own dose of terrorism. Since the mid-1980s, public confidence in the Police has decreased. The overall perception of the Police seems to manifest a negative picture. The Armed Forces enjoy the gratitude and respect of the public, in contrast to the regular Police. The Police face allegations of bribery, corruption, rudeness of speech (from senior officers towards the constabulary) which filters down when they speak to the public, intimidation, complacent attitudes when dealing with public complaints and the duration taken to investigate complaints (in the public’s perception). The Sri Lanka Police must revisit the values in the Peelian Principles adapted by Sir Robert Peel of the Metropolitan Police, London.

I have been a child growing up in the extended Police family, and therefore have an insight into the service life of policemen. It is sad to observe a general decline in Police professionalism, in comparison to past decades. This lacuna could be one of the reasons for the apparent lack of personal discipline, devotion to duty and genuine love for police work among the cadre. For the record I must say that the Inspectorate of the Sri Lanka Police is the backbone of the Force. There are hundreds of hardworking honest officers in the ranks of Chief Inspector, Inspector and Sub-Inspector. They perform a massive workload with dedication. Officers in the rural areas don’t have facilities such as those in Colombo, but they work amidst these challenges. One is left to ponder on the facilities of food and accommodation amongst the humble constabulary. Again there are good cops who genuinely perform their duty and should be appreciated.

I wish to pause and recall two incidents. The first is about ASP Gaffoor. He was a tall and strong man. One day a criminal had thrown a crude homemade hand bomb at him, when ASP Gaffoor was at the Borella junction. Courageous as a lion, he didn’t flinch. Thankfully the bomb didn’t explode, and ASP Gaffoor stood proudly and completed his duty. He didn’t react and take revenge. The law took its course. He was duly promoted as DIG years later.

The other is from watching the late DIG Nihal Weerakkoddy (Director – Communication Range). Our family knew him since he was an ASP. He was a genuine Buddhist. One day the Constable driving him had somehow cut his hand when fixing the Police vehicle and then SP Weerakkoddy quickly set about applying medicine and bandaging the wound, to the astonishment of the Constable. In an age when people want to boast of their ranks (Police or corporate industry) this is a glowing example of humility. These are the good qualities of men who had authority. Sadly these qualities are decreasing in the regular force of the Police.

Having spoken to a cross-section of policemen over the years, I know that almost 90 percent of policemen and policewomen serve in stations far away from home, working long hours. A common issue was the delay in due promotions, which has been addressed in an ad hoc manner, demotivating many diligent officers. Children of Sergeants and Constables feel their parents are not treated well. In comparison to the policemen who served 50 years ago, the men and women in active duty today face greater threats. The Easter Sunday attacks of 2019 is an example of how the Police have to respond to dangerous threats.

Police officers are the first responders to monitor protesters at public venues. The protestors have also displayed a degree of violence, in some instances which requires crowd control techniques. Public Order Management is not an easy task as it requires tactical decision-making. This has become an area of great contention with complaints of human rights violations. For years TV channels have shown how police personnel drawn from local stations (with no training in this duty) reacted violently, often using abusive speech and manhandling protestors in public view. Do these police personnel know about crowd dynamics in controlling a mob? Often police action triggers the crowd’s reactions – as opined by French psychologist Gustave Le Bon, the father of crowd psychology and behaviour.

It is not appropriate for policemen to physically subdue or carry female protestors. It is appalling to see the low fitness levels of Sri Lankan policewomen who have no physical strength to enforce the law during these protests. They can’t even hold the police cordon, around the protesting crowd. Whenever making an arrest of protesting civilians (if they prove to be a threat) the arrest, if legal in that specific situation, must be done with speed and tact. Police must use force only to secure the observance of law. The Riot Control Police Unit, who have better training and operate from Field Force Head Quarters should update their Public Order Management techniques, and also be given modern equipment to assist them in their task, ensuring their safety.

Police Higher Training (in-service) needs more resources, decisive leadership and rewards to motivate top performers. I recall the dedicated work of former DIG Achilles Joseph in this regard. He was an academic and iconic police officer. Women police officers need better exposure to climb the ranks with professional pride.

Learn from the STF

The Police Department established the Special Task Force (STF) in 1983, under the prudent guidance of late Ravi Jayewardene. These officers play a pivotal role in the areas of counter-terrorism, hostage rescue, bomb disposal and transport of high-profile prisoners. It has been my privilege to be associated with the STF for many years. The men and women serving within the STF have displayed high levels of teamwork and discipline. The STF has its expert team in Public Order Management, following the rigid standards of the UN, known as the Formed Police Unit (FPU). It is time the policemen in the regular Police Force learn crowd control and arrest techniques used by the STF. The regular Police seem to be lacking the acumen to plan ambushes and arrest high-profile armed criminals. In contrast, the STF has shown its brilliant prowess in waterborne-riverine operations.

Some months ago, an arrest was made by local Police in a coastal area. As shown on TV it was disgraceful to see some policewomen being kicked by other women (civilians), during the arrest. There is a void in self-defence techniques and physical fitness among policewomen and policemen. Regular cops on duty must have a firearm (basic pistol) at all times, and wear bullet-proof vests when on raids for their safety. They must have the discernment and confidence to shoot, when required. Police restraint techniques must be updated keeping human rights in mind, that is, various methods of hand-cuffing and new devices like the Hobble Restraint.

I have visited the Sri Lanka Police College (established at Kalutara in 1967) on several occasions. This college is the cradle of law enforcement training. There are seven other training schools – in Elpitiya, Kundasale, Nikaweratiya, Pallagama, Mahiyangana, Boralanda and Kalladi. The syllabus seems to cover all police related topics. Trainees have a great environment and holistic atmosphere, with plenty of recreation. The instructors were dedicated. Trainees pass out with pride.

Where do cops go wrong in real life duty? It is when they come into contact with the public. We can’t point fingers at the Police alone. It is the public who make cops solicit bribes or gifts when seeking favours or expediting a Police process. On the other hand, have the police got used to expecting these? People must stop using the names of known DIGs or SSPs or ASPs at Police stations when lodging complaints to induce a better response. Likewise, OICs must ensure all people get justice within the law and courteous service, so that influential names don’t come into play.

Another grey area is the language barrier at police stations. Police officers must be proficient in Tamil and English languages too. What if a complaint is made by a foreign tourist at a Sri Lankan Police station? Some police officers have missed on UN mission selection due to poor English skills. This issue must be logically remedied by teaching languages to cops at all level. It is a positive sign that new Police stations were opened in the Northern Province after years of absence. It is highly commendable that Tamil-speaking recruits are being gradually absorbed into the Police cadre. This is the way to consolidate national unity. It is the role of Sri Lankans to reactivate their vigilance committees incorporating temples, kovils, churches and mosques.

The recent gifting of 2,000 three-wheelers by the government to enhance community policing is welcome and commendable. All police station OICs must duly engage the public in a friendly manner to prevent crime. The key to crime prevention is public support. The result of Police efficiency is the absence of crime and disorder. Finally, Police rugby must be enhanced to bring the police team to their former glory when they had amazing players like DIG Nimal Lewke, SSP S. Sivendran and rugby superstar the late DIG Charles Wijewardana. Encouraging sports is a great way to build bonds with the sport-loving public. As the Peelian Principle concludes, the legitimacy of policing is based upon the general consensus of support (of the public), with transparency about Police powers, their integrity in exercising that power and their accountability in doing so.

(The writer is the author of the book ‘Target Secured: Inside the Special Task Force’)