TO SIR WITH LOVE – Bernard VanCuylenburg

The history of any business enterprise will reveal that success was possible due to the will of the entrepreneur, tenacity of purpose, and defiance in the face of any challenges or adversity. Sri Lanka recently lost a doyen of entrepreneurship who strode the business world like the proverbial colossus. His passing leaves a void in the  business ranks of the nation, and an even bigger void in the hearts of his family and all who knew and love him. On my shoulders fell the task of writing and delivering a tribute at the memorial Mass held for George Ondaatjie on the 4th February at St.Mary’s Church, Bambalapitiya.

with a lifetime of achievement.

The world is a poorer place for his passing.

P.S. The “Travice” referred to in the tribute is one of George Ondaatjies sons

Subject: Tribute for the Memorial Mass of Mr.George Ondaatjie on the 4th February 2019.

TO SIR WITH LOVE

I am Bernard VanCuylenburg, and I joined Nilaveli Beach Hotels Limited in April 1973  as Administrative Manager of the Company under George Ondaatjie who was my boss. I have agonized writing this tribute trying to find the proper words to express my sentiments, and I paraphrased the song title of a popular hit song of yesteryear which sums it  up  – To Sir With Love.   When my telephone rang  that Summer night of January 4th and I heard Travice’s voice at the other end of the line, I shuddered anticipating the news I was about to hear. And now as I try to find the perfect words to pay tribute to a man who leaves an enormous void in the hearts of his family, friends, and all who knew and loved him, the past few weeks have been a whirlwind of emotion for me.

Since I arrived in the country, I have been deeply touched by the tremendous outpouring of love and grief by those who spoke to me about his passing.

As mortals we have to resign ourselves to the fact that we are a small part of God’s grand design.

Oh! But George Ondaatjie was such a big presence on God’s earth ! Love is not an easy feeling to put into words, nor is loyalty, trust or joy. But George Ondaatjie was all of these, and I pay this tribute mainly from my experience of having worked with him as my Boss   –  in fact of having worked only for him which was an experience and a privilege. He was always busy, and I do not say this lightly. Working for him, I soon found you had to be one step ahead because he was a visionary who broadened his horizons with daring decisions. But the horizons he saw were bright, hopeful, and full of promise.

He was genuinely optimistic and I saw first hand how he faced any challenges life threw at him. He made me believe that anything was possible, and with him it usually was !

I mentioned before that he was always busy. But, he was never too busy to share his love of life with those around him. He was an empathetic man who had an enormous capacity to give of himself and, to give in a philanthropic sense. I saw first hand the extent of his philanthropic deeds, and he gave the word new meaning. I have seen him help others more times than I can remember, and he once practically swore me to secrecy, saying he did not want me talking about this to anybody. He wished me to maintain strict anonymity and privacy whenever he did somebody a good deed…..a big man with a big heart…….

Although he strode the business world like the proverbial colossus, he could relate to people from all walks of life. He looked for the good in people and usually found it.

We live in a broken world which has lost its way. A world in which great men often lead with their egos. But George Ondaatjie led with his heart, his compassion and more importantly, his honour. He had a great time living , and to us who grieve there is one comforting thought. I have no doubt he is having the time of his life in that eternal city where the roses never fade.

To conclude I wish to share a small verse for all those who grieve, shed bitter tears and journey through this dark night of the soul. I hope it will solace and comfort you, and ease your burden of sorrow. The title of this verse is called HORIZONS and sadly, I had the painful task of reading it at my own Mother’s funeral.

And love is immortal

Death is only a horizon

And a horizon is nothing but the limit of our sight…….. 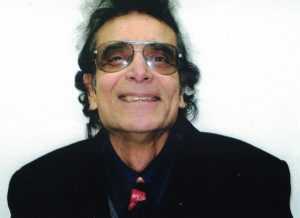