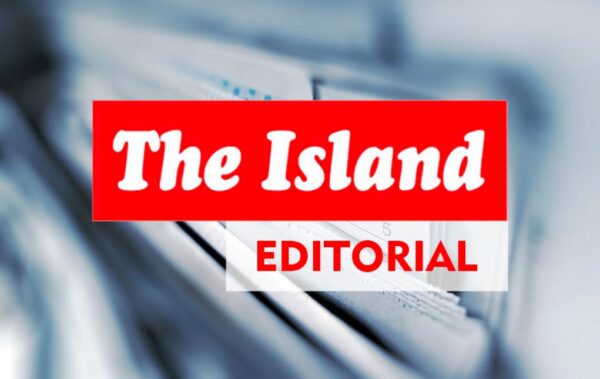 The hunt for anti-government protesters continues apace. The police are all out to net them. A cook finds himself in the soup, having stolen two television sets from Temple Trees while the place was being occupied by the anti-government protesters recently. He has been remanded. Another person has been taken into custody for removing an electric iron from the President’s House. But those who stole billions of rupees from the state coffers are going places, and having others arrested for lesser offences!

The high-octane performance of the Sri Lanka police is really amazing and needs to be appreciated. All those who damaged the President’s House, Temple Trees, the Prime Minister’s Office and the Presidential Secretariat, stole goods from those places, and torched other properties including President Ranil Wickremesinghe’s private residence must be brought to justice. But the problem is that the government is apparently preoccupied with the hunt for the Aragalaya members at the expense of what must be done urgently to secure IMF and World Bank assistance to straighten up the economy and ameliorate the people’s suffering.

The World Bank has said in no uncertain terms it will not offer any new financing to this country until an adequate macroeconomic policy framework is put in place. Fair enough! Unfortunately, the government does not seem keen to get its act together. Instead, it is busy consolidating its power and avenging itself on the protesters, who have knocked them off their pedestals.

The police, who have demonstrated their selective efficiency once again by taking swift action against thieves who mingled with the anti-government protesters, should be asked to answer some questions being raised by the public about a heap of cash amounting to Rs 17.8 million found at the President’s House and handed over to them. If such a huge sum of money had been detected at anyone else’s residence, the police would have demanded to know how it had been earned. Whose money is it, and what was it doing at the President’s House? Does it also belong to Daisy Achchi?

A port worker who removed President Gotabaya Rajapaksa’s flag and used it as a bedsheet has also been nabbed by the CID. We thought the presidential flag was not worth the cloth it was printed on. President Ranil Wickremesinghe himself has said there should be no separate flag for the President, hasn’t he?

Some Aragalaya activists have been barred from leaving the country, and it has been reported that the fingerprints found at the President’s House, etc., will be used to prevent other protesters who stormed those places from leaving the country. If only such precautions had been taken in respect of the key suspect wanted for the Treasury bond scams. Former Central Bank Governor Arjuna Mahendran fled the country with ease. Now that those who masterminded the bond rackets are back in power, one need not be surprised even if Mahendran is brought back as a financial advisor to the Rajapaksa-Wickremesinghe government? All other crooks have crawled out of the woodwork.

The cook in the soup has committed a very serious offence, and will be lucky if he does not receive a jail term. But the crooks who stole from the public purse, carried out various rackets at the expense of the public, ruined the economy and thereby landed the entire nation in the soup, are still ensconced in power, doing more of what they did much to the detriment of the country. Economic recovery and national progress will continue to elude this country until these crooks are made to feel the full face of the law just like the thieving cook.