1959 All-Island Inter-school Basketball Championships : About the team, the coach and the Polka Dot Jerseys – From Doug Jones 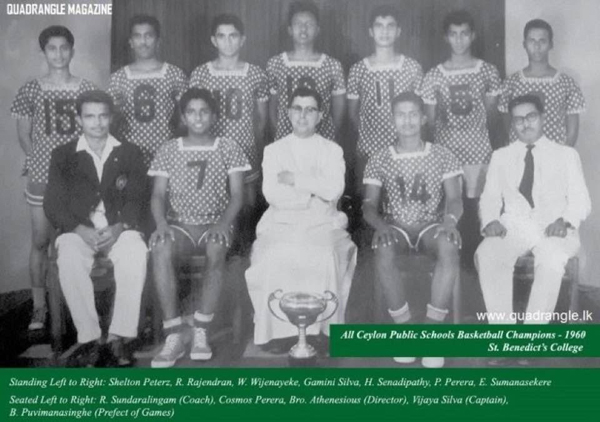 Introduction: All those featured in this historic photograph attended St Benedict’s long after my student days there. The only person I recognised in it was Bede Puvimanasingha, Prefect of Games. I had heard sketchily about the team’s sporting prowess but luckily, I was able to contact a member of the team, Cosmas Perera (now Mahagama) who is currently a resident of Los Angeles (USA) and he kindly filled me in with all that happened at that eventful encounter in Jaffna.

For the first time in the history of this competition, the finals of the 1959 All-Island Inter-school Basketball Championships was held in Jaffna when St Benedict’s College Fives met Jaffna Central. The participation of the Benedictines in this match was under a cloud due to lack of funds for the boys to make the trip. However, the team had fared exceptionally well by winning the Junior Basketball Championship the previous year and Bro. Athanasius, the Director at the time, decided to finance the trip to Jaffna as a gift to the team that comprised of the entire Junior champions side, plus a very experienced basketballer and College boarder Vijay Silva.

The first Five comprised of Vijay Silva, an accomplished former College soccer goalie and the most senior basketballer in the side, who was appointed Captain. He had a great game playing at Centre and cleared the boards at both ends of the court. His defence was impeccable throughout.

Percy Perera was the team’s star shooter. He played in the right forward position, a quick and high percentage shooter making baskets from beyond the lane. Working closely with Percy was Cosmas Perera who had the responsibility of controlling the game, dribbling the ball to attack opposing players and delivering the ball safely to Percy who was always greedy for points.

Playing left wing was Winston Wijenayaka, former captain of the Junior Championship team, and the most experienced member of the side, who used that knowledge to advantage.

Supporting left guard to Cosmas was an agile R. Rajendra who displayed his ability to play well on the inside as well as on the outside.

The final score was St Benedict’s scoring 67 points to Jaffna Central ending up with 61.

Bringing the Championship Trophy to Colombo was a great surprise to everybody, including the Brother Director.

Considerable kudos for this magnificent success goes to the coach Ram Sundaralingam. While St Benedict’s can boast of having exceptional basketball coaches in the past, Ram is considered one of the best coaches, if not the best, St Benedict’s ever had. With foresight, he changed the Junior winning team into a Senior team. A strict disciplinarian, this highly qualified coach trained his proteges to master all the finer tactics that in no small way made them a champion team.

Ram went a step further by introducing Polka Dot vests as the players’ attire for the championships, never done before by any basketball team.

It also must be remembered that three members of this champion team Percy Perera, Vijay Silva and Gamini Silva were also representing their country while at school. Also significant is that Cosmas Perera was Captain of the National team from 1964 to 1970 and most remarkably, he was the first to Captain a National Sports team while still at school. Such was the quality of Benedictine basketballers who represented their Alma Mater in those halcyon days.

While the polka dots may have been eye catching, it was match winning tactics and skilful play honed under a gifted coach that turned tables for the Benedictine basketballers.