A Handbook of English Grammar – by Prof Rajiva Wijesinha 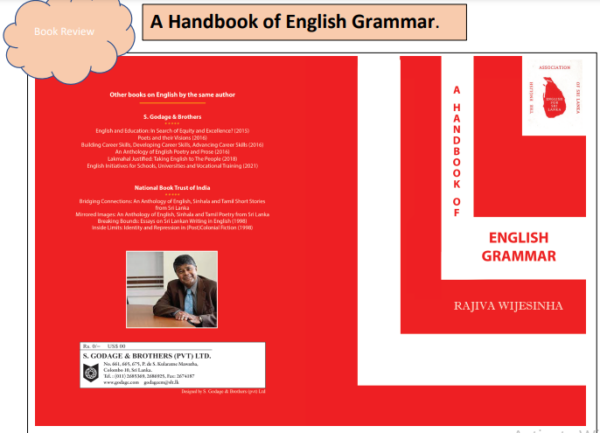 The latest book by Prof Rajiva Wijesinha published by Godage & Bros is his seminal textbook, A Handbook of English Grammar. This is the second reprint of the 10 books published since the restrictions imposed by coronavirus, and the second reprint following a revised edition of the Gratiaen Award winning Servants.

This too is a revised edition, incorporating in the book most of the reading texts on which exercises in the Handbook are based. It has now been prescribed again as a text for students of the postgraduate English and Education course conducted by the University of Sabaragamuwa, since even some graduates are not aware of the basic principles of English Grammar.

The first edition of the book was produced for the pre-University General English Language Training (GELT) programmed, which Prof Wijesinha coordinated together with Oranee Jansz from 1993 on. That handbook incorporated material from the three Workbooks produced previously for the English Diploma courses at Affiliated University Colleges, which Prof Arjuna had initiated Aluwihare when he was Chairman of the University Grants Commission.

The Handbook was full of exercises for students, some of them based on a companion reader called Read, Think and Discuss which Prof Wijesinha and Mrs Jansz also produced. That was when the programmes of the early nineties found fruition in the A Handbook of English Grammar.

Book Review Sabaragamuwa University English degree which catered principally for students who had not been able to offer English for the Advanced Level. In addition to an innovative Speech Course devised by Mrs Jansz, that book carried a range of reading material, including some of the inspirational historical sketches which renowned educationist Goolbai Gunasekara had written for the GELT readers dealing with history. Four of those sketches appear again in this new edition of the Handbook, including incisive introductions to the Renaissance and the Industrial Revolution, invaluable for students when the Ministry of Education omitted the latter in the whole grade span for history.  The new Handbook also has a range of entertaining stories, by Oscar Wilde and Chitra Fernando and Nirmali Hettiarachchi.

The comprehensive guide to Grammar, which moves from the parts of speech to the construction of different types of clauses, was found invaluable by the first batch of students on the new Sabaragamuwa external course who were able to use the last remaining copies of the previous edition which had been brought out by the Foundation Books imprint of Cambridge University Press in India. Five years ago, the book was prescribed for the English courses offered by the Department of Technical Education and Training, though subsequently, a new dispensation stopped the new English courses. But the Teacher Training Diploma course was allowed to go on, and its products are also fast forwarded for a degree at the University of Vocational Technology.

The book was handed over to CUP when Prof Wijesinha left the university system, and the Handbook was then prescribed for Indian universities too. But now that Prof Wijesinha is teaching again at university level, CUP has restored the copyright to Prof Wijesinha, which enabled Godage to bring out yet another version of a text already used by thousands of students in both Sri Lanka and India.