Sarath Amunugama’s The Lion’s Roar: Anagarika Dharmapala and the Making of Modern Buddhism offers a comprehensive yet very readable account of the life and influence of Anagarika Dharmapala (1864–1933). In Sri Lanka, Dharmapala is revered for reviving Sinhalese Buddhism and for restoring Sri Lankan pride during a period of colonial domination. He is also admired for his lifelong struggle to establish Buddhist management of Buddhist sacred sites in India. Scholars of religion have tended to identify Dharmapala as the founder of “Protestant Buddhism,” that is to say, of a form of Buddhism heavily influenced by “Protestant” thinking in its doctrines and forms and thus rendered acceptable to the modern mentality.

Dharmapala has also been branded as an early proponent of the kind of chauvinistic and nationalistic Buddhism evident in Sri Lanka in the recent conflict between Sinhalese Buddhists and Tamil Hindus. A great merit of Amunugama’s book is that 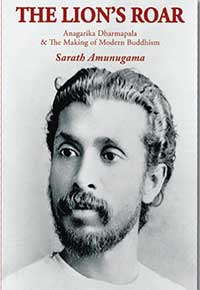 it provides a sound basis to arrive at a more complete picture of Dharmapala than has been heretofore possible. The author first locates Dharmapala (born Don David Hewavitarne) in the context of social and economic changes in Sri Lanka during the colonial period, particularly as these relate to the revival of Buddhism in the late nineteenth century. Dharmapala’s family belonged to the new merchant class who had prospered through the opening of commercial plantations by the British. Elements of this new nativist elite, with Dharmapala’s father at the forefront, formed strong bonds with the Buddhist sangha and laid the foundations for the early Sinhala-Buddhist revival and resistance to missionary influence and colonial paternalism.

Although educated in missionary schools (which gave him deep knowledge of Christian scripture and Western thought), Dharmapala was given special instruction in Buddhism and Sinhala language at home. When the Theosophical delegation headed by Madame Blavatsky and Colonel Olcott arrived in Colombo in 1880, the young Dharmapala was present along with his father and uncle to welcome them. (Olcott and Blavatsky publicly adopted the Buddhist faith soon after their arrival in Sri Lanka.) Dharmapala’s relationship with the Theosophists and the influence they had on him is an important and very interesting aspect of Amunugama’s book. It was Madame Blavatsky who encouraged Dharmapala to master Pali. (He was later instrumental in establishing a department of Pali at Calcutta University.) Blavatsky also encouraged him to make a pilgrimage to Bodhgaya, the site of the Buddha’s Great Awakening (mahabodhi) in northern India.

The 19-year-old Dharmapala travelled through southern Sri Lanka as Olcott’s translator and learnt the art of public speaking and the importance of education and role of the printing press in spreading the message. The importance these aspects assumed in Dharmapala’s “mission” is covered in detail in the book. It was also under the influence of the Theosophists that Dharmapala envisioned a new role for himself as a celibate “homeless one” (anagarika): neither a layperson pursuing worldly goals nor a monk enmeshed in rituals and cultural prescriptions, limited by the caste and other restrictions on the Sri Lankan clergy of his day. Fortunately, his wealthy parents supported his new vocation.

The book provides insight into Dharmapala’s thinking and motivation through detailed attention to his diaries and hitherto unpublished letters. Surprisingly, Dharmapala spent the greater part of his life in India. His first visit came about because of his involvement in the Theosophical Society, which had established its headquarters in Madras (Chennai). A substantial portion of the book considers Dharmapala’s establishment of the Mahabodhi Society and his efforts to return the sacred site in Bodhgaya and the site of the Buddha’s first teaching in Sarnath to Buddhist hands. It also details his relationship with the Bengali intelligentsia (the bhadralok) and discusses the impact of nascent Hindu nationalism on his thinking and his links with Hindu revivalists. (Swami Vivekananda and Dharmapala were both prominent figures at the world Parliament of Religions in Chicago in 1893.)

Dharmapala’s international connections with Japan, Britain, and the United States are explored in some detail. Readers interested in the broader influence of Dharmapala and his ideas on political and social movements beyond his lifetime will also find much of value in this book. Amunugama suggests that Dharmapala was more of an internationalist than a nationalist. He argues that Dharmapala’s Sri Lankan nationalism needs to be seen in the context of colonial oppression and British condescension to Sri Lankan cultural and spiritual values. One of Dharmapala’s goals was the restoration of Sinhalese selfrespect. More broadly, he believed that Buddhism had a message for all humanity.

After his first visit to Bodhgaya in 1891, Dharmapala committed himself to work towards the re-establishment of Buddhism in aryavarta (northern India) and the propagation of the word of the Buddha in Asia and the West. It is evident that Dharmapala’s mastery of Pali and his study of original Buddhist texts were as much responsible for the direction of his moral and religious thinking, as was Protestant influence. Amunugama makes clear that Dharmapala’s position did not involve a repudiation of traditional Buddhism. It was also the reading of original Buddhist texts that led Dharmapala to reject Theosophy. Certainly, he was critical of the laxity of monks and encouraged lay religiosity, but he aspired to be a bodhisattva working for the good of humanity in all his future lives.

Dharmapala died in Sarnath a fully ordained monk. There is value in the detailed analysis provided by Amunugama, but the book is longer than it needs to be. Considerable repetition could have been avoided by some reorganisation. Some sections of the book would perhaps have been better left to journal articles, for example, the chapter on John de Silva and the Sinhala Nationalist Theatre and the chapter on the role of the printing press in the Buddhist revival.