The month of April is a much anticipated time of the year in the Sri Lankan calendar with the “Sinhala and Tamil New Year” or “Aluth Avurudu” festive season marking one of the happiest holiday seasons in Sri Lanka. April is known as the month of ‘Bak’ to express “fortunate” from Sanskrit. Sinhala and Tamil New Year signifies the reaping of the harvest and social customs especially of the farming community. Aluth Avurudda dawns with the completion of a twelve-month period when the Sun moves from Meena Rashiya to Mesha Rashiya. This transitional period is called “Sankranthi” and is believed to be a period with no auspicious time. Thus,
people engage in religious activities. 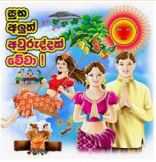 Avurudu season becomes more important with the traditional rituals connected with the celebration which lasts for weeks. Aluth Avurudda was celebrated in the Kandyan Kingdom as a national festival performing the rituals on the auspicious times called “Neketh” proposed by the astrologers bringing prosperity and happiness to the country. Rituals of the new year commence with bathing on the last day of the old year and viewing the moon the same night. Lighting the hearth, entering into the first business transaction, having the first morsels of the new year and anointing of oils and “nanu” (a herbal mixture) are some of the rituals taken place in auspicious times during the new year time. The approach of each auspicious time for various rituals is marked by firecrackers which is a sign for happiness and joy. A variety of Avurudu specific games take place around this festival season making people share and care for each other.

New year is mostly about unity, forgiveness and togetherness. The rituals are arranged in a way to encourage people to share with their loved ones and conduct the rituals together. The idea of the whole new year festival is aligned with “being new” in life for Sri Lankans.
Buying new clothes, giving a new look to houses and preparing traditional sweats are very common as a preparation for the festival. Koha, the Asian Koel, a type of a cuckoo bird has a strong connection with Avurudu celebrations according to the traditional literature.

Sinhala and Tamil New Year is about caring and being joyful at the beginning of their new year making a fresh start. This wonderful break obviously adds some colour to the lives of the hardworking Sri Lankans to remind the value of humanity and kindness.

Wish you all a very happy new year!

Chathurika Wickramage
Ms Wickramage is an Information Technology lecturer at RuhunaUniversity, who recently returned to Sri Lanka after completing her PhD at Queensland University of Technology