Because we all have been children…-BY PRAMOD DE SILVA During an interview with a famous American film star, the interviewer asked him whether he knew about children. His answer was simple, instant and straightforward: “I have been a child”. Indeed, it is not just possible to become an adult instantly without passing that rite of passage called childhood. Thus we all know what it is like to be a child. This is the phase of life that most of us will recall with glee later on in adult life, perhaps even at the very end of one’s life. 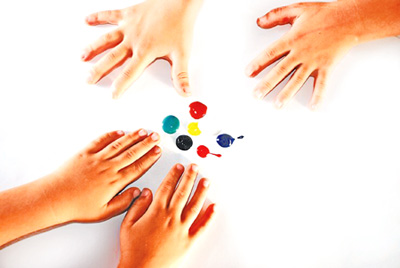 Just what is childhood? It is generally believed to be the period from age 4-5 to 16 (No one really remembers anything about the years of infancy up to around 3 years). There is no doubt that it is the best time of one’s life, a time that never really comes again. It is the period in which we learn about life, go to school, make the first friends (some of whom will stand by you for life), study various subjects and above all, play and have fun. In the formative years of childhood, we also pick up a language or two.

The Convention on the Rights of the Child

UNICEF notes that children are neither the possessions of parents nor of the State, nor are they mere people-in-the-making; they have equal status as members of the human family. Children and young people have the same general human rights as adults and also specific rights that recognise their special needs. Children are neither the property of their parents nor are they helpless objects of charity. They are human beings and are the subject of their own rights. The Convention on the Rights of the Child sets out the rights that must be realised for children to develop to their full potential. The Convention offers a vision of the child as an individual and as a member of a family and community, with rights and responsibilities appropriate to his or her age and stage of development.

By recognising children’s rights in this way, the Convention firmly sets the focus on the whole child. The Convention recognises the fundamental human dignity of all children and the urgency of ensuring their well-being and development. It makes clear the idea that a basic quality of life should be the right of all children, rather than a privilege enjoyed by a few. Children are especially vulnerable – more so than adults – to poor living conditions such as poverty, inadequate health care, nutrition, safe water, housing and environmental pollution. 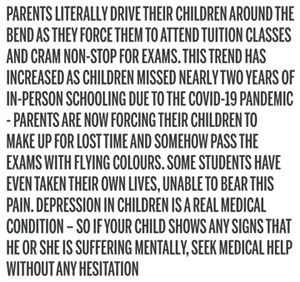 The effects of disease, malnutrition and poverty threaten the future of children and therefore, the future of the societies in which they live. Globalisation, climate change, digitalisation, mass migration, shifting employment patterns and a shrinking social welfare net in many countries all have strong impacts on children. The impact of these changes can be particularly devastating in situations of armed conflict and other emergencies. Today’s children do indeed face many more challenges than children did even a generation ago.

As I recall, when I was a child in the 1970s, there were no distractions such as TV to divert attention away from studies and play, though in my case I preferred the latter. Tuition was just becoming a ‘thing’ during this time, although most parents did not send their children to tuition classes. Once we returned home from school around 2-3 p.m., the rest of the day was free for studies and play with the children in the neighbourhood, with lunch and dinner thrown in at the desired times. We usually used to sleep around 9 or 10 p.m., though this could get extended to 11 p.m. or so on Fridays and Saturdays. We loved weekends and Government holidays as they gave us an opportunity to visit nearby friends and relatives and have fun all day long.

There was no pressure from the parents to ‘cram’ for any exam (school or Government), though I did have a sort of a time table to manage my time between studies and playing. The parents too had ample time to discuss studies with their children back then. Dinner was a family affair, with plenty of banter and laughter at the table. The same applied to breakfast and lunch on weekends and holidays.

Things have changed drastically over the past few decades, with childhood becoming an unrecognizable blur for most children. The 24/7 rat race to make money has consumed every facet of life and childhood itself has become a victim. Today, most children do not even come home after school – they attend a few tuition classes at various places and come home exhausted around 9 p.m. – still in school uniform – and ready to hit the bed sometimes even without dinner. If taken at all, dinner is a lifeless affair – with everyone gazing at the TV screen or engrossed in the Facebook feed on their smartphones.

This is unfortunately what passes for childhood for most children now. There is little or no time for play and fun even during weekends, as these too are spent attending tuition classes. Parents literally drive their children around the bend as they force them to attend tuition classes and cram non-stop for exams. This trend has increased as children missed nearly two years of in-person schooling due to the Covid-19 pandemic – parents are now forcing their children to make up for lost time and somehow pass the exams with flying colours.

Some students have even taken their own lives, unable to bear this pain. Depression in children is a real medical condition – so if your child shows any signs that he or she is suffering mentally, seek medical help without any hesitation.

Today’s children are also distracted by TV and smartphones. Many children are addicted to TV – and not necessarily to children’s programs. Whenever they get a small break from studies, they tend to switch on the TV or a family member’s smartphone (some children do have their own smartphones), where on the latter they tend to play video games. Thus during the time that they should go out and play with other children, they are usually at home looking at a smartphone screen.

This habit has other pitfalls such as online child abuse, which parents should guard against. Children must in any case be educated properly about avoiding any instances of child abuse, physical or online. It is a well-known fact that children are mostly abused by those who know them well, so parents have to be alert on who their children associate with.

Smartphone and TV addiction affects the children’s mental and physical development, for play in the physical sense of the word is essential for them. Research also suggests that prolonged exposure to the blue light of LCD screens can also affect the eyesight of children, unless they use so-called computer glasses with a blue-light filter. They also miss learning some life skills as a result of staying in – I am not sure how many children, especially in urban areas, can climb a tree now. Who knows, such a skill may come in handy later on in life, say, during a flood or an emergency. Such skills, once acquired, are hardly forgotten and stay on in so-called ‘muscle memory’ throughout life.

Thus parents and teachers have an onerous responsibility to let their children enjoy their childhood. For starters, parents must strive to cut down on the number of tuition classes attended by children – sometimes they go to more than one class for the same subject. Parents should help their children to draw up a home timetable with ample time for both studies and play plus other breaks such as tea. Children also need ample time for sleep – around eight to nine hours per day. This is essential for their developing brains and bodies.

Parents must also stress that exams are not the end of the world – now there are educational and employment opportunities even for those who do not fare very well at exams. Moreover, parents can restrict access to both the TV and smartphones via parental locks on these devices, though it remains to be seen as to how effective this would be in the case of older children who tend to master such devices in double quick time. Parents who have autistic or differently abled children must take extra care in dealing with them, giving them every opportunity to enjoy their childhood and ensuring that they do not feel isolated. Many such children learn to break free from the shackles imposed by their condition and become useful citizens in adult society.

Above all, family life is vital for the healthy development of a child. Forget TV dinners – at least a few times a week, have dinner around the family table with free-flowing conversation. Parents should discuss studies and any other issues with children frankly and with an open mind. Childhood is mostly a journey of the mind and parents should help the children to make the most of it, unfettered by the complexities of modern life.