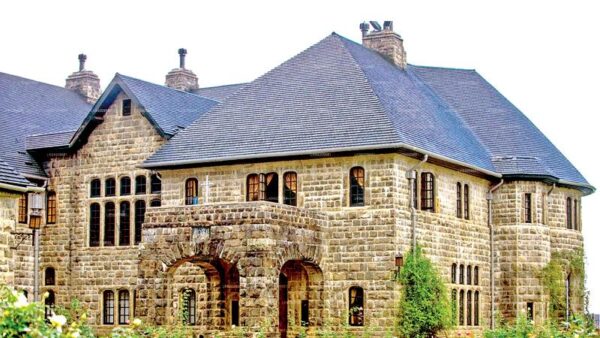 When driving about four kilometres from the foggy city of Haputale, one will not miss the old-fashioned monastery run by the priests of St. Benedict’s. Nestled amidst lush green hills, this Adisham Bungalow, is visited by a large number of local and foreign tourists. 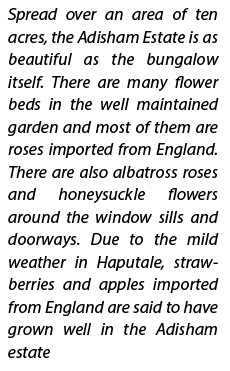 According to history, it was built by Sir Thomas Lister Villiers, who was born in 1869 in Adisham. His father, Henry Montagu Villiers, a pastor of the Church of England, was of aristocratic descent, and mother, Lady Victoria Russell, was the daughter of John Russell, a former Prime Minister of the United Kingdom. Educated at a public school in England, he came to Ceylon, then a British colony, with the intention of working as a cultivator.

In Ceylon, he was able to begin his career as a trained cultivator on the Elbedda Estate in Bogawantalawa. He married Evelyn Hope Walker, the daughter of a tea planter, in 1896 and traveled to Brazil. After four years, in 1900, he returned to Ceylon and started his own tea estate.

Thomas joined the George Stewart Group, which traded in Colombo in 1905, became its Chairman in 1928, and held that position until his retirement in 1949. He was also the unofficial European Member of the Legislative Assembly of Ceylon from 1924 to 1931.

The idea of building a house according to English architecture in a mountainous area came to Thomas’s mind when he was Chairman of the George Stewart Group. For this he chose Haputale in the middle of a scenic forest among the highest peaks in the country. The Adisham Bungalow, somewhat similar to Leeds Palace in Kent, is based on Theodore’s architecture in England, with sturdy granite walls, tall but narrow window panes and English-style chimneys.

The Adisham Bungalow, of which the construction began in 1929 under the guidance of a British architect, was completed two years later and was almost like an English house.

Its masonry work was entrusted to specially trained masons from South India, and the roof of the Adisham Bungalow was made of flat teak tiles made from teak wood imported from Burma. Every door, window, staircase and floor in the house is made of Burmese teak. The furniture, silverware and carpets were all imported from England.

Spread over an area of ten acres, the Adisham Estate is as beautiful as the bungalow itself. There are many flower beds in the well maintained garden and most of them are roses imported from England. There are also albatross roses and honeysuckle flowers around the window sills and doorways. Due to the mild weather in Haputale, strawberries and apples imported from England are said to have grown well in the Adisham estate.

The Adisham Bungalow, a symbol of beauty, was frequently visited by the aristocrats of colonial Ceylon. It is said that the nobles, including the Governor, attended many of the parties held there. Lady Villiers was a very hospitable and kind woman who also had a passion for painting. Many of the oil and watercolour paintings she painted still adorn the walls of Adisham Bungalow.

Thomas had two sons, both of whom died before him. As a result, he retired as Chairman of the George Stuart Group in 1949 and sold the Adisham bungalow along with its furniture to the Sedawatta factory before boarding the ship back to England.

Ten years later, on December 21, 1959, he died in Kent, England. Later, in 1961, the Roman Catholic Church purchased the Adisham Bungalow and estate, which was converted into a monastery and administered by St. Sylvester’s clergy.