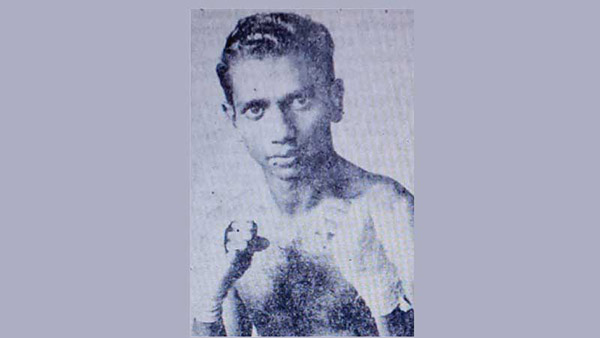 Leslie David Perera Handunge was an outstanding boxer who had the rare opportunity of representing the country at two Olympic Games.

He also has the distinction of being the first boxer from Sri Lanka to make his appearance at the London Olympic Games and the first to record a win in the preliminary rounds.

Handunge was born in Kandy on June 18, 1921 and joined Trinity College for further studies. His brothers and sisters were also well-known sportsmen and sportswomen in their respective fields at that time.

While keeping the family tradition, Handunge took to boxing at the age of 15 and had the privilege of captaining the Trinity College Boxing Team in 1939.

He was certainly a multitalented sportsman and also displayed his prowess while representing the school in rugby, cricket, athletics and hockey.

Handunge won his maiden National Boxing title when he bagged the flyweight class event while representing the Government Services Sports Society in 1944.

He was also the undefeated champion in the light heavyweight category until his time of retirement.

In 1947, He entered the Agriculture Faculty of the Peradeniya University to obtain a Degree in Agriculture and in the following year as an undergraduate he won the Manning Cup for the Best Boxer at the National Boxing Championship Meet.

This success also helped Handunge to earn a place in the National Team which would compete at the 1948 London Olympic Games.

At the pre-Olympic Games competition in England, Handunge defeated J. Herlae and Charles C. Dhabi and his performances were highly commended by the ‘Weekly Sports Review’ of London.

He made a tremendous start to his London Olympic Games campaign when he knocked-out his first opponent Portario of Uruguay.

In his next contest, Handunge once again proved his talent by dominating the proceedings against his opponent from Italy.

However, much to the surprise of many onlookers and journalists, the Italian boxer was declared as the winner.

After his Olympic Games campaign, Handunge entered the Loughborough College to obtain a Diploma in Physical Education and became the first Ceylonese to receive this Diploma.

He was able to make an impact while at the University when he bagged the bantamweight title at the Inter-University events in Ireland in 1949.

He was appointed as Team Captain of the Sri Lankan contingent for the Helsinki Olympic Games and had the better of Jesus Stello of Mexico in the first-round bout. However, Handunge was beaten in the next round by David Dower who incidentally was the bantamweight European and World champion. Handunge, who was popularly known as ‘Joe Louis of Ceylon,’ then announced his retirement from the sport at the age of 31. (C.D)