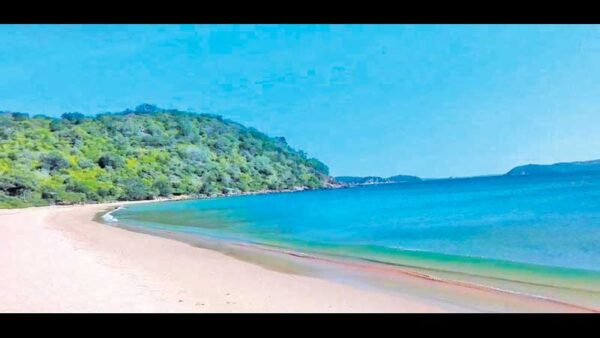 A destination that offers pristine beaches, ancient maritime history, beautiful underwater dive sites and succulent seafood should motivate anyone to travel and experience the magnificent bliss of Trincomalee. This narrative is based on eight visits made to this area over the past few years. Trincomalee has something to captivate everyone.

The Koneswaram Kovil is a popular Hindu landmark in this province. The kovil dates back to the 12th century. The edifice was originally built on Swami Rock overlooking the vast ocean. According to oral tradition, there was a turbulent storm which caused the waves to rise and crash on the rocks. Exposed to the powerful waves, the kovil is said to have been dislodged into the sea. As the years went by, a kovil was built on the site for the second time. The resilient devotees were pleased with the outcome of their new kovil. Decades later, the Portuguese invaders came ashore and attacked the kovil causing serious damage. It was a time of grief for the people who worshipped here. One has to take a long walk uphill from the Fort Frederick entrance to reach the kovil. You will encounter friendly monkeys along the path; these creatures have been resident here for decades and are used to people. However, it is best not to feed them. The present-day kovil has been beautifully refurbished and consolidated. The kovil and adjacent cliffs offer a panoramic view of the ocean.

Those interested in maritime history can visit the small fort built within the confines of the Eastern Naval Command that guarded the approach to the resplendent Trincomalee Harbour and the area of the Koddiyar Bay. This small fort and the Hoods Tower are of significant value to history enthusiasts. The cannons of various sizes which are placed along Ostenburg Ridge are a few of the last British naval guns in existence around the world. It is no wonder that British Prime Minister Winston Pitt (1766–1768) once commented about the strategic Trincomalee harbour saying: “The finest and most advantageous bay in the whole of the Indian region. The equal of which is hardly known, in which a whole fleet may safely ride, and remain in tranquillity.”

The value of this harbour was realised by King Parakramabahu I, during the 12th century. The visionary king had established a military presence at Trincomalee from Polonnaruwa, a commendable feat during that era. Subsequently, in 1639, this area was captured by troops under the command of Dutch Admiral Westerwold. In 1716, Dutch Governor Hendrik Becker had decided to build a fort here to enhance coastal defences (the larger Fort Fredrick was already built by the Dutch in 1665, from the remains of a smaller Portuguese fort built on the same location in 1624).

Therefore, the Bay of Trincomalee could now be defended by the new fort named Ostenburg (meaning Eastern hill) with 32 pieces of artillery and a crew of 30 soldiers. As per our maritime history records in 1782, British Admiral Sir Edward Hughes sailed with his fleet and made a daring surprise attack on the Dutch garrison at Fort Fredrick, whose troops were unable to defend it. Inspired by his success just six days later, Admiral Hughes stormed Ostenburg Fort with his troops and captured the location. We climbed the famous Hoods Tower, which has a commanding 360-degree view of the entire harbour at a height of 32 feet. The topmost floor has a massive searchlight, installed by Metropolitan Vickers Ltd, Sheffield, England.

The view from here is amazing as the forest gives way to hills and the ocean. We could see Great Sober Island, Foul Point and the border of Sampur from this tower. On another visit to Trincomalee, I was able to visit the Great Sober Island (landmass of 175 acres), which had initially been occupied by the French in 1672 and later by the British in 1784. The Royal Navy went about enhancing its defences on the Great Sober Island. The large underground ammunition dumps, dark tunnels and fortified gun turrets can still be seen, adding an enigmatic feeling to this island.

Around this area, there are smaller islands which navigators call Little Sober Island, Powder Island, York Island, Round Island, Norway Island, Chapel Island, Elizabeth Island and Elephant Island. All of these smaller islands are a vital part of the ecosystem and must be preserved for all Sri Lankans. The British Admiralty also set up some navigation points known as Foul Point (with a small lighthouse), Flagstaff Point, Clappenberg Point and Eagle Point.

During the Japanese air raid on April 9, 1942, this hill was targeted along with the harbour. The light aircraft carrier HMS Hermes was bombed repeatedly by Japanese aircraft and later sunk. The Orlando Beach area on Great Sober Island is a beach oasis that supplements the ecosystem. The Sri Lanka Navy has done a commendable task in preserving these historic areas of maritime history.

By 1943, the large Catalina twin-engine planes were flying for Qantas Imperial Airways. The magnificent planes soon began flights to Colombo. Flying in that era was certainly a luxury. The 28-hour flight had a very unique feature where passengers were able to delightfully witness two dawns. The seaplane had a long journey from Koggala Lake to Swan River Perth on the West Australian coast––28 hours of non-stop flying, flown by Qantas Imperial Airways pilots, the longest leg of Qantas’ link flight between London and Sydney, in the war-torn years of the 1940s. There were five Qantas aeroplanes that flew this route. They were all named after the stars – Antares, Rigel, Spica, Vega and Altair. Hence, the pioneers of aviation advertising dubbed this splendid air journey as the ‘flight of the double sunrise’. The Civil Aviation Department was established in 1947, and was located at Transworks House, Fort. Some say that these flights took off occasionally from Trincomalee.

Another place to visit is Orr’s Hill and the Marble Beach area. The serene atmosphere is almost celestial. The striking colours of the Sri Pathirakali Amman Kovil inspire veneration from all devotees. The intricate carvings and paintings of this kovil are stunning. Kinniya is famous for its hot water springs. We decided to visit the dried fish shops which are equally famous for their salted deep sea delights. The dried fish here is cheap compared to prices in Colombo. Seafood in general is a gourmets dream with so much culinary variety. The Marble Beach area is a mandatory stop. Adventurous travellers can engage in diving. For those who enjoy playing golf, the Eagles’ Golf Links operated by the Sri Lanka Air Force is a fine destination to unwind and play. The lush green links, covering a large area are beautifully maintained. Families can stay at the Golf Links after making advance reservations.

Travelling from Nilaveli, you can reach the marine park on the Pigeon Island. This is a national park. The island’s name is from the rock pigeons that live here. The coral reefs are awesome. It is said 300 species of fish are found around this reef. Scuba diving is also possible in this serene reef. Trincomalee is the radiant gem of the Eastern Province. The sunsets in Trincomalee are a reward from heaven and make awesome photographs. This is a pulsating holiday destination in Sri Lanka.