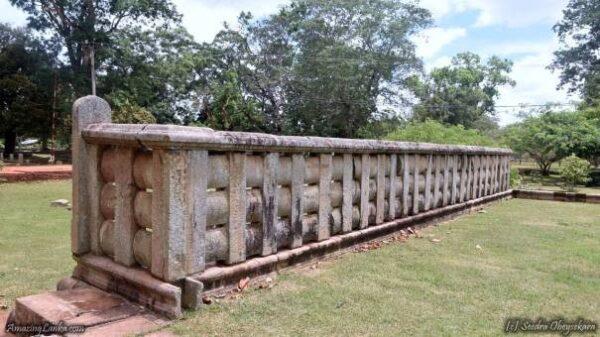 Located approximately 120 meters south of Jetawanarama (also known as Jetawanaramaya stupa or Buddhist reliquary monument) and located in the ruins of *Jetawana Monastery in the UNESCO world heritage city of *Anuradhapura, there is a structure known as “Buddhist Railing” which has been researched and analyzed by many scholars, authors and travelers from the period, the British discovered it in the 1800’s. This site is enclosed by a large railing made of stone slabs and pillars.

According to the Archeological Commissioner’s Report of 1890, *H.C.P. Bell has discovered and restored this unique site.

According to scholars, the stone fence is a Buddhist motif found in ancient Buddhist architecture including *Sanchi in India. According to *Mahawamsa, there had been a *Bodhi tree inside this structure and King Dappula II (797-801) had donated a golden Buddha Image to the Temple within the premises. The plaque at the site indicates that there had been an Image House or Bodhigara (Bodhi tree shrine) as there is a square pit inside the enclosure and the water course leading to it.

There are four entrances to the Buddhist Railing with each entrance on the center of each side. There are entrances with flights of steps from the four sides. At the center are the eastern and western entrances. The rectangular structure is constructed with a long wall of 42 x 34 meters and approximately (1.17 meters) high. The railing comprises plinths, standards with horizontal rails and coping and the railing stands on an attractively designed three feet (approximately one meter) high five layers of molded rock. According to scholars, the rows of columns within the enclosure had once held the superstructure.

In 1892, the upper portion of an inscribed slab had been discovered from the site. According to records of the 10th century, there are certain regulations regarding the maintenance of a Gateway Water Pavilion constructed by devotees of Ratnama Pirivena (Pirivena meaning a monastic college for educating Buddhist monks) of Jetawana Monastery.

The period, the structure was constructed nor the constructor is unknown.