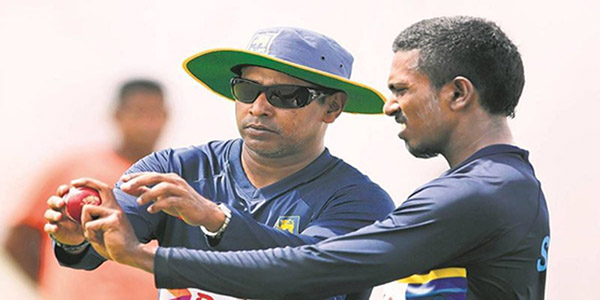 Fast bowling is an arduous task and is doubly so in the Asian subcontinent, where docile pitches and energy-sapping heat takes their toll on those brave enough to take up the challenge. One must have a big heart, a great deal of determination and lots of skill to succeed as a fast bowler. Chaminda Vaas (CV) had plenty of these and a few more.

He represented Sri Lanka for over 15 long years with great distinction. He played nearly all his cricket alongside the great Murali; whose bowling record is the best in the world. This prevented Vaas from receive the plaudits he deserved. He was the “unsung hero.” Vaas was no extrovert. He did not celebrate his wickets with much physical display. He went about the business of taking wickets and helping the team’s cause as a true professional.

Vaas has been a great performer for Sri Lanka. It will be the statisticians and connoisseurs of cricket who will genuinely appreciate what he has done.

He delivered 39,213 balls for Sri Lanka in Tests and one-day matches, an equivalent of 6,535 overs and took 755 wickets in these two formats. The split was 355 test wickets and 400 limited-overs wickets. In addition, he scored 3,089 test runs at an average of 24 runs per innings and 2,025 runs in the limited-overs segment. A genuinely outstanding record due to a Herculean effort.

The purpose of this article is to review the circumstances under which he resigned as the bowling coach of the Sri Lanka team a few hours before the team departed for the West Indies.

Sri Lanka Cricket (SLC) released a media statement stating “SLC wishes to inform that former Sri Lanka Cricketer and Consultant Bowling Coach of Sri Lanka Cricket, Chaminda Vaas today (February 22) announced his resignation from his post effective March 26, 2021, and also informed that he will not be available to tour West Indies as a member of the support staff. Vaas’s resignation comes hours before the team was scheduled to depart for West Indies, which is scheduled for tonight. It is particularly disheartening to note that in an economic climate such as the one facing the entire globe right now, Mr. Vaas has made this sudden and irresponsible move on the eve of the team’s departure, based on personal monetary gain. The Management of SLC, and indeed the entire nation, hold Mr. Vaas in high esteem as a cricketer who has excelled for his country. His years of yeoman service have been appreciated and rewarded over the years, both in status and in kind. In such circumstances, it is extremely disheartening that a legend such as Chaminda Vaas has resorted to holding the administration, the cricketers, and indeed the game at ransom, by handing in his resignation at the eleventh hour, citing the administration’s refusal to accede to an unjustifiable demand for an increased USD remuneration, in spite of being a contracted employee of Sri Lanka Cricket, already receiving remuneration that is in keeping with his experience, qualifications, and expertise, in addition to which he would have been entitled to the usual USD per diems offered to all members of a traveling squad”.

It was an unusually lengthy and candid media statement highly prejudicial to Vaas. I assume that as Vaas is contracted to SLC until March 26, 2021 he was unable to comment other than say in a twitter message “I made a humble request to SLC and they turned it down. That’s all I can say at the moment. justice will prevail!

In trying to understand what actually happened it is necessary that SLC discloses as to why Vaas was appointed the team’s bowling coach just three days before the team departed to the West Indies. Should this vital appointment not have been made several weeks prior?

I understand that David Saker who was the contracted bowling coach of the Sri Lanka team left the country no sooner the second test match between Sri Lanka and England concluded on January 26, 2021. I have not seen a media statement from SLC explaining why Sarkar terminated his contract and whether the termination was unilateral or mutually agreed. It would be good to know whether there was a clause in the contract requiring Saker to give at least three months notice for early termination and if not given whether SLC is entitled to financial compensation. This is how employment contracts are drafted in the private sector and hopefully SLC has a similar clause when they contract both foreign as well as local coaches.

Considering the above there is a question mark as to why the SLC waited until February 19, 2021, to announce the appointment of Vaas as the bowling coach? This is three weeks after Sarkar left his post. Was SLC trying to find an alternative coach and only due to their failure turned to Vaas at the last minute? By any stretch of imagination, appointing a person with only three days notice for an overseas assignment seems exceptionally unprofessional. Today, International cricket is big business, and there is no way that important appointments should be made at such short notice.

It is true that Vaas is contracted to SLC but only as a “Consultant Coach”. A consultant’s job in the business world is significantly different from that of a full-time assignment. Therefore, should SLC and Vaas not have negotiated a new or even a supplementary contract? Was Vaas being appointed as the permanent bowling coach or just for this tour?

The SLC takes issue because Vaas resigned only a few hours before the team’s departure. We must assume that SLC had not negotiated terms with Vaas prior to announcing his appointment. Otherwise, there is no reason for a financial dispute. The only plausible explanation is that the SLC assumed that because Vaas was contracted as a “Consultative Coach”, he had no option but to accept this appointment? The SLC is unfortunately silent in these matters.

Unfortunately, in our part of the world, those in top positions reposed with responsibility tend to agree to any terms and conditions laid down by “white-skinned” applicants. However, when it comes to our own equally skilled and capable, every effort is made to refuse market terms. I have seen this even in the private sector.

In this instance, based on information in the public domain, I do not think that Vaas requested anything on par with the remuneration paid to Sarkar. Only an additional US $ 75 per day as his per diem allowance?

The SLC used the word “held to ransom” by Vaas in their media release. If indeed the enhanced amount was only US $ 75 per day, it seems the insinuation is way over the top.

SLC also states, “It is particularly disheartening to note that in an economic climate such as the one facing the entire globe right now”, that Vaas had wanted an increase in his per diem allowance. I find this an extraordinary statement coming from the same team who proposed that a cricket stadium be built in Homagama at the cost of several billion rupees during the pandemic! Are these guys really serious?

Sri Lanka has very few real heroes other than in the armed forces who fought during the terrorist war against the LTTE and the Sri Lankan cricketers who notably represented the country when Sri Lanka cricket came of age. Between 1990 to 2005 we woke to read news reports of our Army, Navy and Air Force camps being overrun and with many fatalities and ammunition and arms lost to the LTTE. The bombing of the Central Bank, the attack on the Bandaranaike International Airport and the oil storage tanks in Kolonawwa were disheartening. Amid this mayhem the only shining light and ray of hope was the performance of our cricketers. They gave us hope and much pleasure in those depressing times.

The best example for me was my 65-year-old mother becoming a cricket fanatic from 1995 onwards. She would get up early to cook and then have a shower and sit in front of the TV to watch our “boys” after firmly telling our father not to disturb her! She would call me during meetings to ask who was Murali’s batting coach or why Sanath only wants to hit sixes and fours!

There is no doubt that Chaminda Vaas and those who won the World Cup in 1996 and became a world cricket force were our true heroes. They made us proud to be Sri Lankans and showed how there is a way if there is a will. I am sure the many thousands of our soldiers fighting in the jungles would have been genuinely inspired by the deeds of Vaas, Murali, Sanath, Sanga, Arjuna, Aravinda, Roshan, Hashan and many others. In my view, SLC’s media release on Chaminda Vaas is a poorly thought, rushed, and one-sided document.