China says its initiative to build ports and other infrastructure across Asia and Africa, paid for with Chinese loans, will boost trade 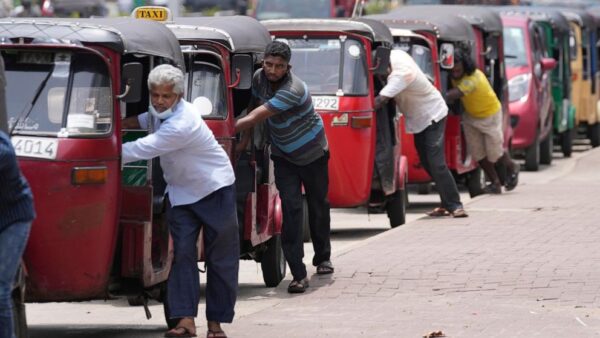 FILE- Sri Lankan auto rickshaw drivers queue up to buy petrol near a fuel station in Colombo, Sri Lanka, Wednesday, April 13, 2022. China says its initiative to build ports and other infrastructure paid for with Chinese loans across Asia and Africa will boost trade. But in a cautionary tale for other borrowers, Sri Lanka’s debt to Beijing threatens to hold back efforts to resolve a financial crisis so severe that this Indian Ocean nation cannot import food or gasoline. (AP Photo/Eranga Jayawardena, File) The Associated Press

COLOMBO, Sri Lanka — China says its initiative to build ports and other infrastructure across Asia and Africa, paid for with Chinese loans, will boost trade. But in a cautionary tale for borrowers, Sri Lanka’s multibillion-dollar debt to Beijing threatens to hinder efforts to resolve a financial crisis so severe that the Indian Ocean nation cannot import food or gasoline.

Sri Lanka’s struggle is extreme, but it reflects conditions across dozens of countries from South Pacific islands through some of the poorest in Asia and Africa that have signed onto Chinese President Xi Jinping’s Belt and Road Initiative. The total debt of poor countries is rising, raising risks others might run into trouble.

Sri Lanka’s 22 million people are in dire straits. Foreign currency ran out in April, leading to food shortages, power cuts and protests that forced a prime minister to resign. Payment on $51 billion of debt to China, Japan and other foreign lenders was suspended.

Sri Lanka and other poor Asian countries welcome Chinese financing. The Asian Development Bank says the region needs to invest $1.7 trillion a year in infrastructure to keep economies growing. But some, including Sri Lankan critics of their government’s spending, say Chinese-led projects cost too much or do too little for their economies.

China ranks third among Sri Lanka’s creditors after Japan and the ADB and accounts for 10% of the debt, but Xi’s government has an outsize potential to disrupt a settlement.

Beijing promised to “play a positive role” in talks with the International Monetary Fund on a possible emergency loan. China offered to lend more but balked at joining a process that might cut Sri Lanka’s debt, possibly for fear other Belt and Road borrowers that owe tens of billions of dollars will demand the same relief.

“If China gives a concession to Sri Lanka, it will have to give the same concession to other borrowers,” said economist W.A. Wijewardena, a former deputy governor of the Sri Lankan central bank. “They didn’t want to get into that trouble.”

If China tries to avoid debt cuts, that might disrupt the IMF talks or prompt private sector creditors to hold out for more money, experts say.

The United States, Japan, the European Union and other governments also lend, but on a smaller scale. Many Belt and Road countries attract little nongovernment financing because they are deemed too risky or lack a legal framework for investment in infrastructure.

Some governments have run into smaller crises. Truck drivers in Kenya protested after their government imposed a fuel tax to pay for a Chinese-built railway the drivers complained would compete with them.

Others have canceled or scaled back projects. Malaysia scrapped a planned railway in 2019 as too expensive. Thailand renegotiated a high-speed railway following protests that too little work went to Thai companies.

China has restructured some debt. Ethiopia persuaded Beijing in 2018 to forgive some interest and stretch out repayment of a 10-year loan for a $4 billion railway to 30 years. That reduced annual payments but added two more decades of interest charges.

Chinese officials say Belt and Road projects are business ventures, not aid. Most lending is on commercial terms. Details often are secret.

Belt and Road rankles Washington, Moscow, Tokyo, New Delhi and other governments that grumble Beijing, the biggest trading partner for all of its neighbors, is trying to expand its influence and undercut theirs.

Opposition figures say while Sri Lanka needs China to reduce its debt, blame lies with leaders who built unrealistic projects that cannot pay for themselves while they failed to invest in economic development.

Foreign loans “built highways, airports and convention halls in the jungles which didn’t give any returns” in foreign currency, said a lawmaker, Kabir Hashim. “Now we don’t have the dollars to pay them back the dollar loans.”

Critics cite a Chinese-built port in Hambantota in the southeast as a prime example of official recklessness.

It was built in the hometown of then-President Mahinda Rajapaksa and paid for with $1.1 billion in Chinese loans despite the plan having been rejected by an expert panel.

Its promoters said Hambantota, on busy Indian Ocean shipping routes, would ease the burden on Sri Lanka’s main port in Colombo. But it failed to generate foreign revenue.

Beijing bailed out the port in 2017 by having a state-owned company, China Merchants Group, buy a 99-year lease for $1.1 billion. That includes land for an industrial park.

Chinese loans also paid for an international airport near Hambantota. Few airlines use it.

The crisis reignited accusations Beijing used a “debt trap” to gain influence over the country.

“They knew we had no capacity to repay,” said a legislator, Wijeyadasa Rajapakshe.

“We must convince China to forgo at least part of the loans,” said Rajapakshe. “Ordinary poor people, without one meal per day, are paying this debt now.”

Sri Lanka owes $7 billion this year to Chinese banks and other lenders but suspended payment April 13 while it talks with the IMF. The government also owes $25 billion, or about half its total, to private sector bond investors.

A restructuring agreement with China or Japan would be a “positive signal” for a recovery, wrote Mittal.

In a written response to questions, the Chinese foreign ministry said Beijing is ready to “play a positive role in easing Sri Lanka’s debt burden” but gave no indication whether the amount owed might be reduced.

“China is willing to support relevant financial institutions to negotiate with Sri Lanka,” the ministry said.

In April, then-opposition leader Ranil Wickremesinghe told broadcaster Republic TV that China offered a $1 billion loan instead of reducing Sri Lanka’s debt. That would allow the government to make payments, but the total owed would rise.

Wickremesinghe took over as prime minister on May 12 after Majapaksa, who in an earlier role as president built the Hambantota port, resigned.

Chinese Ambassador Qi Zhenhong told reporters April 25 that negotiating with the IMF would interfere with Beijing’s loan offer. The IMF usually requires a borrower to work out a deal with all creditors to reduce debts.

China has avoided joining the London Club of government lenders, the forum for negotiating debt cuts.

The central bank governor warned that China and other creditors must accept the same terms.

“It is not fair to treat one creditor differently to others,” said Nandalal Weerasinghe. “Then the others won’t come onboard.”

“Sri Lanka is not in a position to say no,” he said.