Prime Minister confirms an unauthorised vessel has been intercepted

The Prime Minister has used his last appearance before voting closes to confirm an unauthorised vessel from Sri Lanka has been intercepted on its way to Australia.

Speaking after casting his ballot in his home electorate of Cook in Sydney, Mr Morrison told journalists reports of an interception were correct.

“I can confirm that there’s been an interception of a vessel en route to Australia. That vessel has been intercepted in accordance with the policies of government and they’re following those normal protocols,” he said.

“In the interests of full transparency in the middle of an election campaign, the Labor Party was advised of this and a statement has been issued by the border protection authorities.”

Minister blames Labor for boat attempts under her watch

The Home Affairs Minister, Karen Andrews, told media the interception was the second in recent days.

“The first vessel was intercepted in Sri Lankan waters by the Sri Lankan Navy … this morning the Australian Border Force has intercepted a further vessel near Christmas Island,” Ms Andrews said.

“Those ventures indicate, very clearly, what a risk a Labor government poses to our national security.

“This is not scaremongering, this is a reality, and it has been demonstrated by the two attempts we are aware of.”

A mass text message has since been sent out warning of the intercepted vessel and encouraging voters to “keep our borders secure by voting Liberal today”.

People smugglers have obviously decided who is going to win the election and the boats have already started.https://t.co/8ZMGfrh8Ne

“The people-smuggling trade is vile and risks the lives of the people at sea,” Senator Keneally said.

“To be clear: If you attempt to come to Australia by boat you will not make it and you will be turned around, or sent to Nauru.” 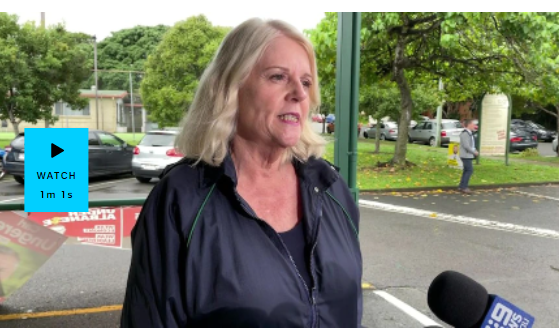 The Australian Border Force issued a statement confirming a vessel was intercepted in a “likely attempt to illegally enter Australia from Sri Lanka”.

“The Australian government’s policy remains unchanged. We will intercept any vessel seeking to reach Australia illegally and to safely return those on board to their point of departure or country of origin,” the statement said.

“Measures and safeguards are in place to enable actions and activities to be undertaken in accordance with Australian domestic law and Australia’s obligations under international law.

“The overriding priority for all agencies involved in Operation Sovereign Borders is the safety of all persons involved, including potential illegal immigrants and vessel crews as well as Australian personnel.”

“In line with long-standing practice, we will make no further comment.” A look back at the past six weeks of electioneering.