“Pay what you feel” has been the catchcry of the iconic Lentil as Anything restaurants for 20 years.

But now, the charity with three restaurants in Melbourne and one in Sydney is asking the community to give back.

Under Melbourne’s coronavirus lockdown, the not-for-profit restaurants have lost their generous diners but are still handing out thousands of meals to those who have lost their jobs and their homes.

“It has been a real loss to us not having the generous donors who come and eat and donate and subsidise the people who can’t afford to pay”, founder Shanaka Fernando said.

Since March, the restaurants have provided 130,000 free meals for vulnerable Australians and the international students who have been struggling to fend for themselves.

Italian student Francesca Papo volunteers at the Thornbury restaurant in Melbourne’s north and relies on it for food.

“I am an international student. I have no government support and I have lost my job so, this is a great place for me.” 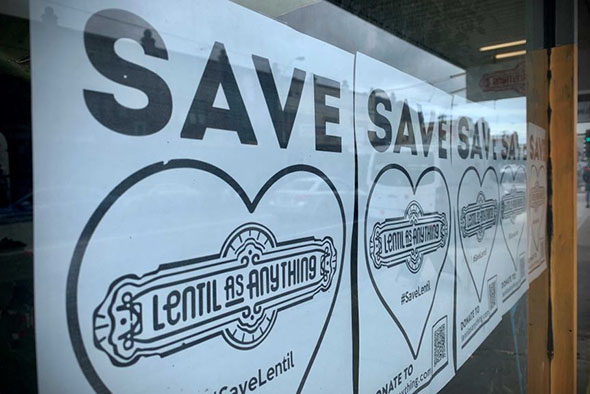 The pandemic has increased the need to provide fresh food to vulnerable patrons including the homeless, refugees and international students.(ABC News: Gemma Hall)

Mr Fernando said small charities were not getting government support like bigger organisations so he has had to turn to a GoFundMe campaign.

Supporter Paula Gomez started the campaign two weeks ago and so far has raised more than $180,000.

“I don’t have words to describe how important it is to provide healthy food to everybody. Everybody needs to eat,” she said.

But she said $300,000 was needed to pay the restaurants’ rents that have been deferred during the coronavirus crisis. “It’s become a really serious challenge and has taken us to the brink of survival”, Mr Fernando said.

Many volunteers, like Christine Loo, work in the kitchens at the restaurants in St Kilda, Abbotsford and Thornbury in Melbourne and Newtown in Sydney.

“I get to volunteer with a bunch of beautiful people from all walks of life. To say it’s a beautiful experience to work here is an understatement,” she said.

Mr Fernando and some of his staff have received JobKeeper payments.

He is donating funds from his payments to help support an international student who does not qualify for government help.

“We are all in this together and everyone’s welfare is our responsibility,” he said. The four not-for-profit restaurants rely on volunteers like Christine Loo.