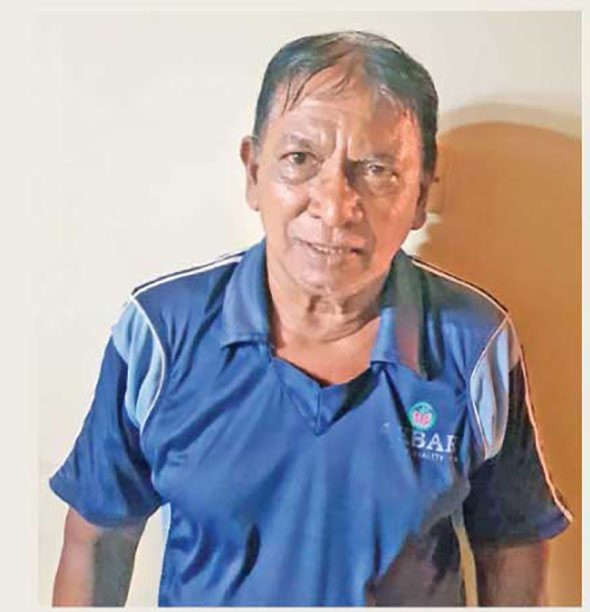 It is very rare to witness a couple with a sound sports background, especially representing the country in the International arena, bringing honour and fame to the country. It was Senarath Kulathilake and his wife late Kamala Kulathilake, who passed away last month who became the cynosure of all eyes in the field of sports which will be recorded as an unforgettable moment

Senarath Kulathilake popularly known as ‘Sarath’ in the Rugby fraternity is the son of late Sammy de Silva Kulathilake a draughtsman who served in the National Housing Department . He had three boys in the family with his elder brother who worked as an Engineer in Building Construction while his younger brother is a Professor Living in America. Senarath was Married to Kamala Kulathilake, one of the double International Women in Sports in Sri Lanka. She represented the country in Netball and Basketball at International Games. She excelled as a Player, Coach, Umpire and an Official in both sports before her demise last month.

Senarath has a son and a daughter The son is a businessman and the daughter is a retired Banker.

Senarath entered Greenlands College in 1954 to the primary class soon after the school was inaugurated in 1952. Greenlands College later was renamed as Isipathana Maha Vidyalaya in 1961. Its name was further changed in 1968 as Isipathana College before it obtained its National school status in 1992.. Isipathana made its debut in rugby in 1963 under Brian Ingram as Captain played the first unofficial game against St.Anthony’s College, Kandy winning it 8-3. Dayalu Perera scored the first try for Isipathana and they went on to play friendlies. In1967, Senarath started to represent the first XV team as scrum Half under Gunasena Wijeratne as captain coached by Ken de Joodt and Mike Davies. His colleagues were Mahinda Jayawardena, Rezano Rajap, Horace Perera, Hafi Abdeen, Sriyantha Rajakaruna, Chandralal Fernando, Juraghan Savangham, Thajone Savangham, Niyas Dooray, Jaseed Ariff, S.H.M. Moulana, T.N.Hossen, T.Rajapathirana, Thalaysingham, Chakarawathy de Silva, Kumar Jayaratne, Athula Wickramasinghe, S.Salgado, D.Keethsiri, N.Devakumar, R.Indrapriya, A.Abeysundera, K.Fernando where they had mixed performance. He was also selected to play for the Colombo schools ‘B’ team along with Hafi Abdeen, Gunasena Wijeratne, Thajone Savangham in 1967.

In 1968, he played under the Captaincy of Juraghan Savanghan where they had the same result as in the previous year. Next year, under Thajone Savanghan, who turned out to be one of the best flankers in the game that time, had a memorable season winning all ten fixtures, with only

Royal and Trinity being reluctant to play them. He also played for the Colombo schools team along with Hafi Abdeen, Chandralal Fernando, Gamini Chandrasekara, S.Pathmasiri which was led by S.Anverdeen of Zahira. He also played for Combined Schools under Shafi Jainudeen consisting of Hafi Abdeen and Chandralal Fernando against Presidents Colts team led by John Burrows of CH and FC.

In 1970, he joined CH and FC along with Horace Perera. During that time the CH team was filled with foreign players of the Class of John Burrows as Captain, Maurice Marrinon, , David McCall and David Graham, . Same year he represented the Presidents XV against the touring Blackheath team from England.

In 1972 the KRFC team captained by Izwan Omar consisted of some top class players in that era. In1971 he was selected to a pool to play against the visiting Paris universities led by fly half Mohan Sahayam who had an early retirement from rugby due to an injury which paved the way for Hafi Abdeen to play for Sri Lanka as fly half.

The Turning point of his rugby career was in1972 at the completion of the club rugby season, where the Sri Lanka National Team was gearing up to participate at the third Asian Rugby Football Tournament in 1972 held in Hong Kong. Due to an unfair selection process at the eleventh hour then Minister of Sports K.B.Ratnayake appointed a three member committee to review the Ceylon Rugby squad for the said tournament. The review committee comprised Capt.William Molegoda, as Chairman, S.T.Thurairatnam and S.B.Pilapitya. The Committee recommended to remove four players namely Malik Samarawickrema, Noel Brohier Irwin Howie and Shafi Jainudeen and include Senarath, Gamini Udugama, Daya Jayasundera, Nizam Hajireen, Reggie Bartholomuez to the squad of 23 players and three officials. Senarath Kulathilake was brought in as scrum half replacing Malik Samarawickrema, which later took part in the third Asian Rugby Football Championship in Hong Kong

Senarath was entrusted as the coach of Dharmaraja College in 1972 in their inaugural year. In 1973, KRFC and Kandy Sports Club were Amalgamated as Kandy Sports Club He played for Kandy SC in the Years 1973,1974 and 1975 season.

In 1977 he made a comeback to play for CR and FC where CR became Champions in the Presidents Trophy beating Army in the Final by 22-6. CR and FC won the double in the year 1977 including the Knockout and Sevens Tournament under Shiraz Fernando’s captaincy. Besides Rugby Senarath also played Cricket for Isipathana College from 1967 to 1969 as a Wicket keeper finally Captaining a few games in 1969 when K.L.S. Sirisena got injured. After leaving school he Played Sara Trophy cricket for CCC under Abu Fuard as Captain in 1970.