Desmond De Silva….a rare gem of Sri Lanka music plucked away to another galaxy –
BY TREVINE RODRIGO IN MELBOURNE 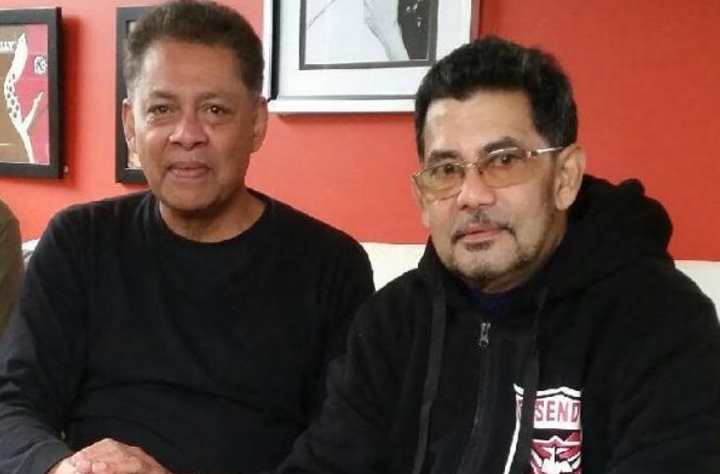 Brilliant musician and singer/ entertainer Desmond De Silva was tragically snatched away from our midst in cruel circumstances when he suffered cardiac arrest while in his sleep in Melbourne. He was 77.

Desmond De Silva had been in hibernation for several months due to the devastating outbreak of Covid which shut down many parts of Australia. After border closures were lifted he embarked on a 31st night dinner dance at the Sri Lounge in the Docklands in Melbourne where he delivered his last fully energized performance.

Widely regarded as Sri Lanka’s best singer/entertainer by far over five decades, Desmond De Silva has covered every spectrum of music in Sri Lanka and later in England and Australia while wowing millions of adoring fans around the globe. His achievements in music cannot be encompassed in a few paragraphs but his fans will readily testify the indelible mark he has made as a wonderful performer. He was to Sri Lankans what Elvis Presley and Frank Sinatra was to the world, showcasing a rare and extraordinary talent that even extended to Motown.

He has travelled through numerous countries as a band member, mainly Europe and Asia and has teamed up with thousands of musicians along the way who have marveled at his unique presence on stage.

After years of globe trotting as a member of the best bands in Sri Lanka, the Jetliners and later the Spitfires, he then continued his work as a leader of his own band , Desmond and the Clan, which was very popular in Europe and Scandinavia. After years of adventure on the road he then settled on a solo career singing as a guest singer and his popularity soared when he ventured into the Sinhala music which he quickly took by storm.

Before long he commanded the respect of the nation by being proclaimed the King of Baila which skyrocketed his fame in an era that gave fame but no massive financial gain, as he rose to an iconic status. It was  a role he held to this day by Sri Lankan music fanatics who could not get enough of him.

Ironically, Desmond always harboured his love for Western music and quite naturally chose not to be categorized or pigeonholed as one dimensional. He has produced hundreds of CD’s, Videos and commands thousands of followers on YouTube and other related music channels.

His impressive versatility and ability to own the stage made him a standout among music lovers immaterial of their ethnicity and sadly he is another of the Sri Lankan icons who have departed this world alongside Sunil Perera and Ronnie Leitch in recent times.

His musical exploits has touched millions of fans through several generations and will continue to do so , such is the impact he has cemented as a once in a lifetime performer.  He has nurtured several musicians along the way giving them pointers which has helped them launch their own careers in music to great heights. He maintained a high degree of professionalism until his last breath and would not compromise his standards for anything less.

Never the arrogant performer, Des had an uncanny ability to interact with his fans on and off stage and this trait would see him draw invitations from all over the world to this day and I for one was amazed at his stamina and durability to be in England one day, then on to Toronto and other cities in Canada, on to Sri Lanka, and several other countries proving his unwaning popularity until Covid shut the world down leaving millions of musicians hamstrung.

In our own interaction with him, Anne and I shared a special love for the man who slipped into our lifestyle seamlessly with wife Phyllis after our initial interaction when Sandra and Esric Jackson asked us to accompany them with Audrey and Breno to their home in Sydney several years ago. We forged a bond that was to last a lifetime although his untimely demise came far too soon.  Our mutual respect for each other and sharing a glass of red or two at night was accompanied by looking for anything humourous to make our evenings lively and made our interaction complete. We are struggling to come to terms with his hurried departure after performing at the Sri Lounge at the Docklands in Melbourne.