I’m A Celebrity 2020: Every contestant as they’re revealed

This year has barely begun, but reality TV season is already upon us, with Sunday’s premiere of the latest season of I’m A Celebrity… Get Me Out Of Here.

Hosts Julia Morris and Chris Brown are back, of course — and they opened the show from South Africa in an appropriately sombre tone, acknowledging the ongoing bushfire crisis back here in Australia and announcing that through this season, Channel 10 will be matching the money raised for each celebrity’s chosen charity and donating it to those affected by the bushfires. .

Now, onto the question everyone wants answered: Who are we watching eat bugs, jump out of airplanes and shower in their underpants in the South African jungle this year?

Meet your celebs, as they’re revealed in tonight’s premiere… 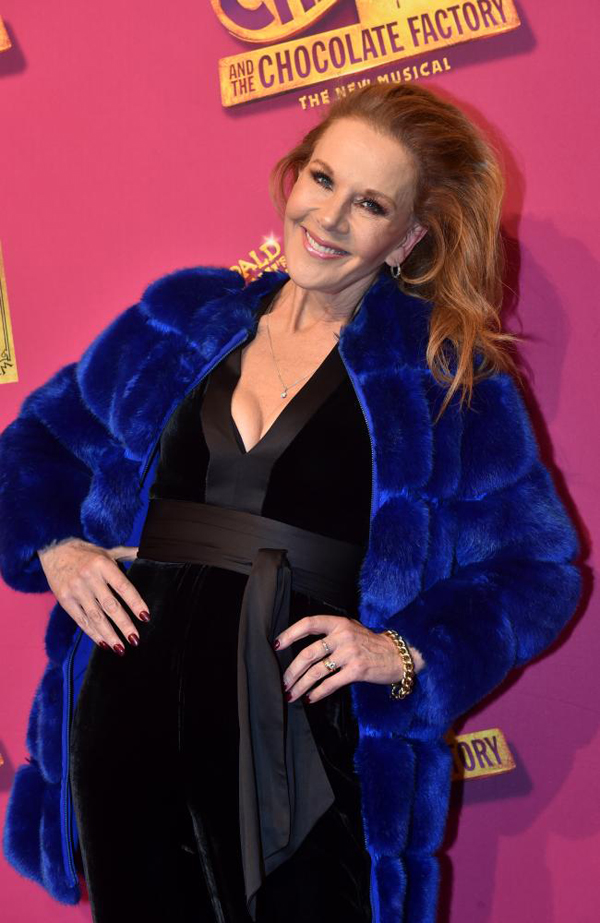 THE CLUE: A leading lady, this Order of Australia winner really knows how to put on a show.

If you’ve stepped inside an Australian theatre in the past 30 years, chances are you’ve seen Rhonda Burchmore. The musical theatre mainstay is one of the country’s most prolific performers — and she gained a TV audience back in the 90s with regular appearances on Hey, Hey It’s Saturday. Oh, and she was given the Order of Australia in 2014. 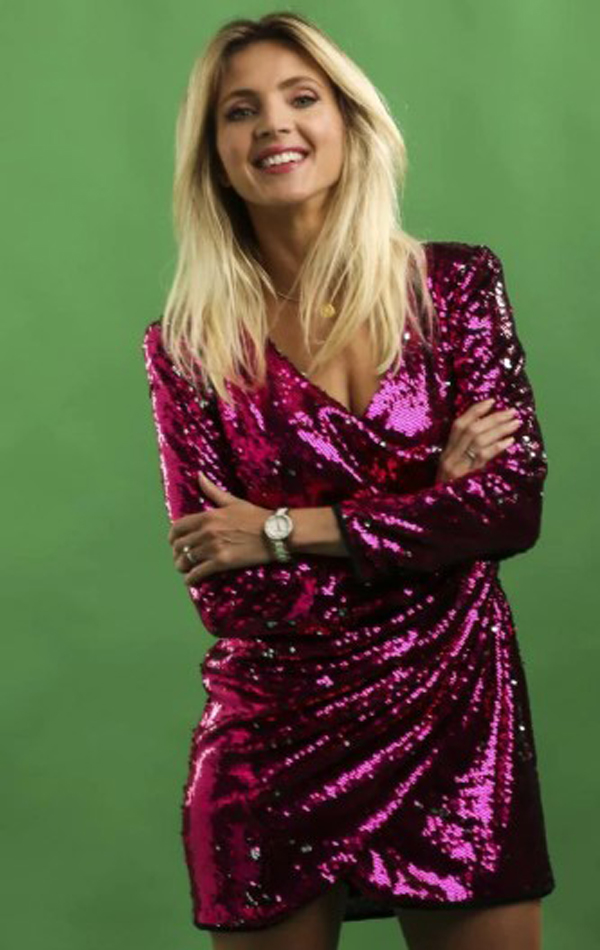 THE CLUE: An Aussie comedian, this controversial blonde is no Barbie.

This Aussie comedian is perhaps the most self-aware person on I’m A Celeb:“I’m the girl you’re Googling right now,” she said in her intro package. Like basically every Australian comedian, she’s appeared on shows like Celebrity Name Game, Show Me the Movie ! and Hughesy, We Have a Problem. She’s also an actor: she appeared in the Aussie film Ned in 2003 and had a supporting role in the 2004 US miniseries The Mystery of Natalie Wood.

And as fellow comic Matt Elsbury pointed out on Twitter, Osborne’s clue makes a lot more sense when you know her 2019 comedy festival show was called Bad Barbie. THE CLUE: From a tropical paradise to jungle hell, how will this blonde bombshell and reality TV beauty cope? 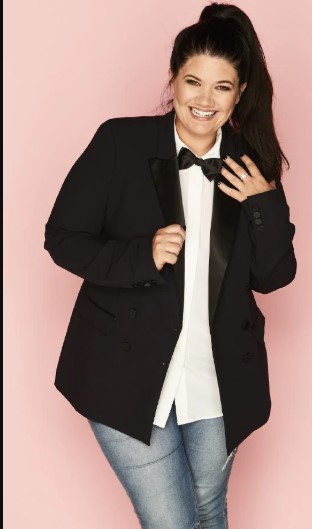 THE CLUE: This YouTube star has over 1 million followers.

She does indeed: 1.1 million Facebook fans and 119k YouTube subscribers, to be exact. Aussie comedian Tanya Hennessy first found fame thanks to relatable viral videos like ‘Things people say to spray tanners’ and ‘Things people say to personal trainers’. She’s also a radio host, TV presenter and author – her memoir Am I Doing This Right? was published last year. 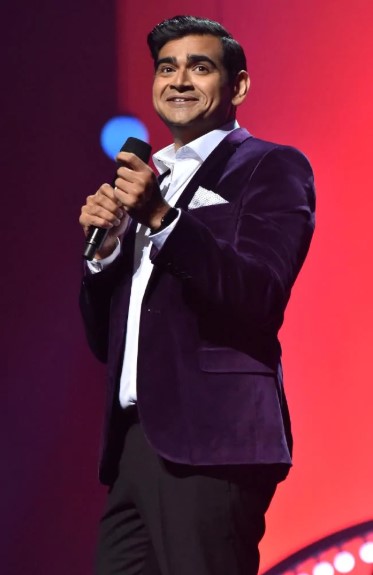 THE CLUE: A Logie-winner, this famous DJ loves to make people laugh.

The Sri-Lankan born Aussie actor and comedian did indeed win a 2018 Logie for Best New Talent. He’s best known for his work in the ABC show Utopia, and has also appeared on Celebrity Name Game, Have You Been Paying Attention? and Hughesy, We Have a Problem. As for the reference to DJing? We’ve figured it out: That’d be his initials, DJ. You think you’re clever don’t you, Channel 10.

Concerningly, fellow Aussie comedian Tanya admitted during the premiere that she’d never heard of him. Awks. Look, this was the first picture we had on file.Source:Supplied

THE CLUE: A lovabale larrikin, this reality star is going from one controversial experiment to another.

Let’s hope the Married At First Sight alumni has a better time on I’m A Celeb, because he still seems a bit bitter about his MAFS experience. “I’m used to a lot of cheaters… A few of you might know me from my terrible experience (on MAFS),” he said during his intro. “We didn’t have fun. I’m not married anymore. These days I do radio and comedy.” OK, sure! THE CLUE: This radio and TV hunk with a rig to boast once famously lost his shirt.

Williams has done a lot since getting his break with regular phone-ins to the Merrick and Rosso show back in 2000, including hosting and presenting gigs on Room For Improvement, The Great Outdoors and Daily Edition. Of course, the memorable moment his clue was referring to was his scantily-clad, season-winning stint on Dancing with the Stars in 2005. 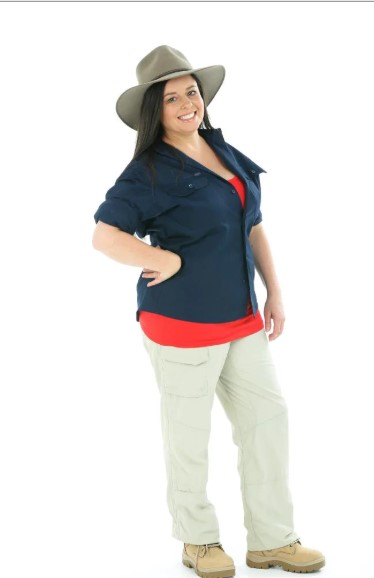 Myf Warhurst on I’m A Celeb.Source:Supplied

THE CLUE: A pop culture guru, this presenter spends a lot of time with their Auntie.

One of two celebs announced hours ahead of Sunday’s premiere, Warhurst, a broadcaster, television presenter and journalist, shot to fame as a regular panellist on the hit ABC (or ‘Auntie’) music quiz show Spicks and Specks as well as hosting the Eurovision Song Contest. Like previous winners Casey Donovan and Fiona O’Loughlin, she’s also undeniably likeable — could Myf take out I’m A Celeb 2020? Perhaps, but only if she can hack the handle African conditions — at the end of day one, she in particular seemed to have copped some pretty nasty sunburn: 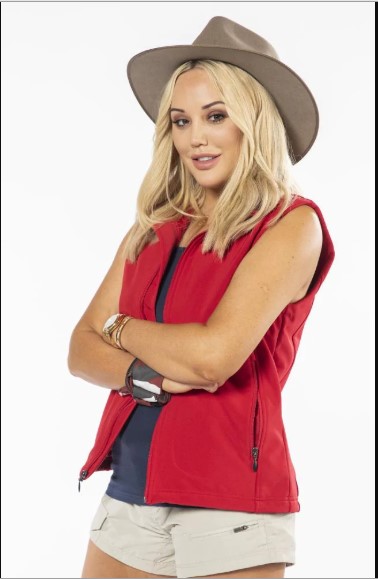 THE CLUE: A TV megastar, this international party animal likes to prove her critics wrong.

On top of her career-making five-year stint on Geordie Shore from 2011, the outspoken 29-year-old Brit won Celebrity Big Brother UK in 2013 and has appeared on Ex on the Beach, Celebs Go Dating, Celebrity Coach Trip and The Charlotte Show, to name a few. As she recently told news.com.au: “10 years ago starting on Geordie Shore prepared me for stuff that other people on I’m A Celeb might be dealing with for the first time. It’s honestly going to be a walk in the park – it’s where I thrive.”

She also told us she HATES heights and would never do anything as terrifying as bungee jump out of a helicopter. And sure enough, during Sunday’s premiere she made it as far as the helicopter but refused to jump, instead saying the magic words: “I’m a celebrity, get me out of here.”

Also revealed tonight: She has history with Ryan. They’ve never met but “chat on social media” (aka slide into each other’s DMs). 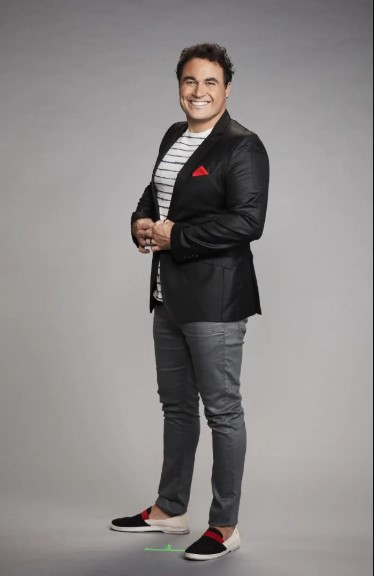 TV chef and The Living Room presenter Miguel was the first celeb announced for the season late last year — and has been starring in that so-naff-it’s-good I’m A Celeb ad with hosts Chris and Julia ever since.

Two more celebs — both male sports stars — were teased at the end of the premiere, and will be properly revealed tomorrow night. Viewers have already had a crack at guessing, and the consensus after tonight’s premiere is that we’ll be seeing former AFL footballers Dale Thomas and Billy Brownless on I’m A Celeb tomorrow: 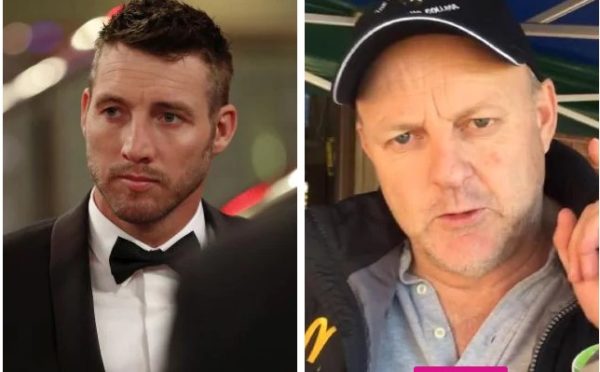 This squares with the remaining two clues: “This Premiership winner is no shrinking violet,” and “ A footy legend, this larrikin is one of the biggest characters the game has ever known.”

Of course, as happens every year, some viewers on social media have arked up about the calibre of celebs on offer. What, no Meghan Markle in the jungle? You mean you couldn’t get Brad Pitt? The Pope was busy? Pfft, poor form Channel 10!