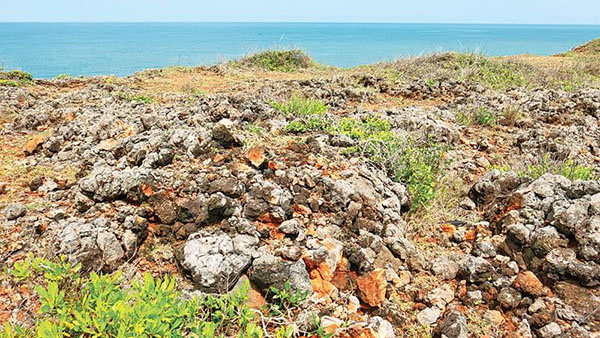 Burnt stone formation on the summit

“There is a look-alike place for everyone, somewhere on earth” goes a saying. Have you ever been struck by the uncanny resemblance of a landscape in one place with that of another you visited?

As a photographer I have travelled extensively. I photographed the Ussangoda region in Ambalantota in the southern coast, and not so long ago I photographed the Kudiramalai point in the north-western coast of Sri Lanka. I stood there struck by an eerie feeling and felt as if I had been transported hundreds of kilometres back to Ussangoda. Kudiramalai and Ussangoda have the same coppery reddish soil texture and historical and archaeological significance.

After a long drive from the Ochappu Kallu archaeological site in the Wilpattu National Park, I reached the promontory of Kudiramalai in Thambapanni on the North-Western coast of Sri Lanka. I was struck by the geological feature that had given the region its name – the copper-red sand. 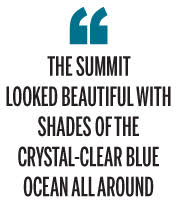 At Kudiramalai the amazing texturized red hue soil patterns which formed a gradient was slippery from the previous night’s rains. Soon the red soil meadows changed the higher elevation landscape to an idyllic pattern.

I loved the solitude on the long stretch of the trail and felt that reaching the top was within my reach. What made the imposing yet spectacular scenery of Kudiramalai hill so attractive was its accessibility. On the summit, though I felt tired out I was quite satisfied as my camera had done a good job.

Kudiramalai literally means Horse (Kudira in Tamil) Mountain (malai in Tamil) and is named thus due to its shape. The reddish soil continues and the landscape looks entirely otherworldly. The cliff has a sudden drop into the ocean. One can just imagine the royal impressive ship of Prince Vijaya arriving on the shores of the north western coast.

The first thing I did was to take a break. It was breezy and an ideal spot to sit and enjoy the panoramic view. The summit looked beautiful with shades of the crystal-clear blue ocean all around. One side looked like a dense forest and I could see massive sea-eagles circling over the sky in search of prey.

Venturing further, I saw a cluster of rocks in various colours. I could see ossified shells and corals over the millennia. The sea had receded, leaving behind the oceanic bed on the land. As the upper layer of soil was removed due to diverse climatic conditions, it revealed this unusual surface. It was almost like a maze as I climbed and jumped across the dark-brownish soil structure.

From pre-historic times, the point of Kudiramalai, or Horse Mountain, has been a site of busy human settlements. Archaeologically valuable objects such as pottery dating back to the Mesolithic Age have been dug up here. The Roman writer and philosopher Pliny recorded an account of a Roman tax collector, who was blown off course and landed in ‘Hippuros’, which also means Horse Mountain, around 44 AD.

Other legends speak of Kudiramalai being ruled by a beautiful Malabar Queen named Alli Arasani. Her warriors had been women as she despised men. She was also known to have had a great fondness for pearls. As the coastline adjoining the promontory had been famous for pearls, Queen Arasani had traded pearls with Arab countries in exchange for horses. Hence, it is believed that this is why the region is known as Horse Mountain.

A jagged cliff jutting into the sea, Kudiramalai point housed the remains of an ancient temple which seems to have been devoted to a horse. One can almost sense it, head flung back and forelegs poised, rearing up against the sky. It was a massive animal, made out of brick, stone and coral plastered. Although most of it has disappeared, parts of its rear leg are still visible. It had stood tall, the front legs raised up in the air. A lantern that hung from the statue is believed to have guided the ships into the port town. Some believe it was this gigantic horse that gave the region its name.

Archaeologists have a great responsibility to unearth the importance of this buried and eroding place to preserve Sri Lankan history and enlighten society. I soon reached a beautiful tranquil cove, where the reddish soil turned a soft yellow sand. A peaceful and isolated seascape, it was the perfect end to my visit to Kudiramalai. 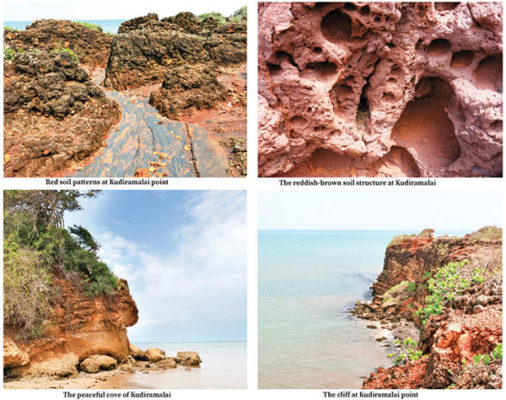