MR. D.N.PEREIRA – Profile of a Legend that has passed through the realms of St. Thomas’ College Mount Lavinia – both as a student and later as a well respected Master on the Staff. D.N.Pereira – born 27th April 1915 & departed this life to eternal peace on 25th April 1993. 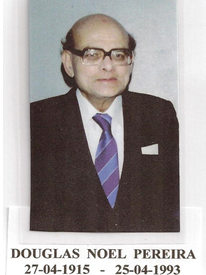 I am Corinne King – the only child of the late

Mr. D.N.Pereira – (Douglas Noel), (D.N.P.), (D.N.) or otherwise known as “Bulto” to the many hundreds of students he taught during his long teaching career.  I am so honoured to have been requested to write an article about my Dad for the S.T.C. OBA (Sydney Branch) Dinner Dance Souvenir of 2013.  Thank you to Messrs: Milroy Berenger & David Sansoni for this opportunity.

I will start this profile of Dad giving you some family background details which not many of you will be aware of.    Douglas was the 3rd son of C.V.Pereira – A Scholar & Writer of Latin Textbooks.  C.V.Pereira along with Warden Stone wrote a Latin Text book that was used at STC.

The learned skills were instilled into my Dad by his father – C.V.Pereira – an old boy & learned Scholar of Trinity College, Kandy, Ceylon.  C.V.Pereira was an only son of his parents & had only one sister. They were children of Victor Pereira who came to Colombo from Goa in India – a Portuguese explorer – who decided to make Kandy his home where he held a high position as a Planter on Choisy Estate in Ramboda.  Victor Pereira (my Dad’s Grandfather met & married Miss Harriett Jane Smith an English Spinster & daughter of His Majesty’s 95th Regiment Ensign – William Smith & his wife Eliza, who had been posted to Kandy, Ceylon to serve the British Army in the far East). (Records – from Anglican Diocesan Office of  Kandy 1831 – 1855).

My Grandfather – C.V.Pereira – was a strict disciplinarian & having fathered 10 children was known to have excelled in Ancient Greek, Latin, English & English Literature.  C.V. Pereira was a personal friend of the English Scholars & Pioneers that were associated with S.T.C. in the early 1900’s – one of them being Warden

Stone, who always invited C.V.P. as his guest to the Grand Hotel in Nuwara Eliya for the Easter holidays.

My Dad was nurtured in this background and was guided by his father to be a Scholar & Teacher of the Classics too.  Dad or D.N.P. accepted the strict upbringing he had from his father who was sought by many parents of students at STC to tutor their boys in the early 1900’s.

In 1929 C.V.Pereira built a 14 bed roomed house and named it “New Haven” down at  No: 94 Watarappola Road in Mount Lavinia.  The purpose of building such a huge house was mainly to take in some boarders.  Many a student was taken in to be tutored in Ancient Greek & Latin.  The building of “New Haven” in Mount Lavinia by my Grandfather – C.V.Pereira – was especially significant too as it was the 1st   two-storey house to be built besides that of the Governor’s House on the Mound – that was to later become the Mount Lavinia Hotel. My grandfather’s house still exists & is in pristine condition!!

D.S.Senanayake the first Prime Minister of Ceylon sent his son Dudley to my Grandfather C.V.P. for private tuition.  Dudley was driven for tuition in a Govt chauffeured vehicle as a young man to my Grandfather’s home – “New Haven”.  My Dad’s Godfather was Sir Oliver Goonetilleke – Ceylon’s first Governor General a distinguished old boy of Wesley College.

It was in this background that my Dad – D.N.P. was nurtured to be the man he was known as – a strict disciplinarian, Master of the Cane, pedantic in his teaching skills and a human being with unusual habits.

D.N.Pereira was born on 27th April 1915 – a Taurus & proud of his Astrological sign.  He was an avid reader of all literature, a great writer, Scholar himself in Ancient Greek & Latin.  He thrived on Shakespeare & was incredibly knowledgeable in his English. Dad enjoyed writing “Speeches” for many people to use for various functions.  It was so interesting to see my father with red pen poised in his right hand always ready to correct any grammar or spelling he would pick in an article – be it in a newspaper or even in a letter he had received from a friend.  The teacher instinct in him always prevailed!!

Many of my Dad’s students remember their past teacher for his many handkerchiefs he carried with him on a daily basis.  He had one hanky for his sweaty & wet brow, one hanky to prevent him inhaling dust & chalk dust, one hanky to clean his fingers after he had used chalk to write on the blackboard, another hanky was for neatly laying on the chair before he sat on it & the last hanky was for cleaning his shiny shoes he was always known to wear.

Dad always came home for lunch and changed his cream tussore suit and went back for the afternoon session in yet another complete change of clothes – right from his underdaks, vest or (banian) as it was called then, shirt, full suit, tie & even his well polished shoes.  As it is always known to be – behind many a successful man is a woman and all due praise goes to my Mum – Nora – who

ironed my Dad’s clothes & laundered his numerous handkerchiefs for him to use in his daily run of duties as a teacher.

D.N.P. was a well respected teacher, having taught at St. Thomas’ in Matara & later at Richmond College in Galle prior to arriving at STC in Mt. Lavinia in 1951.  As a Senior Master at STC Dad enjoyed his many years of teaching the

numerous students that passed through his guidance & nurturing.  As the Master in Charge of the STC Magazine at Mt. Lavinia for many years – this was for him a valuable period of his teaching career he enjoyed immensely.   I too got involved in his teaching career as Dad had many a student himself come home for private tuition – English or Latin.  Dad would give me various tasks of writing an English Essay at our dining table during the period of time he would have “the boys” attend their tuition in his study at the long table he inherited from his father for teaching private students at home specifically.  It was my Dad’s way of keeping me away from the many Thomians that graced our humble home in Mount Lavinia.

Dad was known as “Bulto” a nickname he received at STC in the early 1950’s – around 1953/1954 when he stopped smoking the 15 cigarettes a day quota he allotted himself and he took to sucking the black and white striped lolly called “Bulto”!  This nickname stayed with him throughout his entire teaching career at STC.

In 1959 Dad applied to migrate to Australia from Ceylon and we were accepted under the “White Australia Policy” – but on being passed to migrate my Dad had second thoughts and he felt that STC needed him more than the “new country” and we declined the move.   However, in 1972 the need to migrate was more evident as he had lost his many hours of teaching in the English syllabus – his hours of teaching greatly reduced by half with the introduction of Sinhalese as the main language of the Country.

We migrated mid year in 1972 – Dad was 57 years of age – he taught in Australia until his retirement age of 65+.  Sadly he developed Type 2 Diabetes and had many of his organs affected by the condition.  He was happy to see me meet and marry Ian King (who hailed from the U.K.) in 1975 and above all, he was so happy to become a Grandfather to our only child – a daughter – Karen who was born in 1981.  Her early years were nurtured by Dad.  Karen remembers the “copy book writers” & stories Dad read to her, the English lessons & lessons on life that were instilled into her at a young age.  Karen always talks of the “school holidays” spent with her Grandparents & the valuable hours he spent with her till his demise when she was 11+ years old.  The “teacher” in him never “retired”!!  Dad will be proud of Karen as she is a vocational trainer/career path guide in her field of employment for adults returning to the workforce.

D.N.P. enjoyed his 3 years as President of the STC OBA (Melbourne Branch) in the 1980’s. Those who were on his Committee over that period of time recall the delicious pan rolls, patties, fish ball cutlets & Dutch Bolo Fiado delicacies provided by my Mum – Nora – for the Committee Meetings.  Dad was also the writer of the “Thomiana” journal – the STC OBA “Newsletter”.  The hours he spent seeking “news” of “Old Boys”, making phone calls both local & interstate was phenomenal.   His pleasures were simple – his entire life was dedicated to his Alma Mater.  Dad was a true Thomian to his dying day.  My Dad –D.N.Pereira – will be a Thomian legend – he lived & died for STC.  Maybe up in Heaven he is keeping records of STC Old Boys that enter the Gates of Heaven!!