The international Forbes magazine annually declares the names of 30 distinguished people below the age of 30 years around the world whose contribution has an enormous impact on their selected field of work. 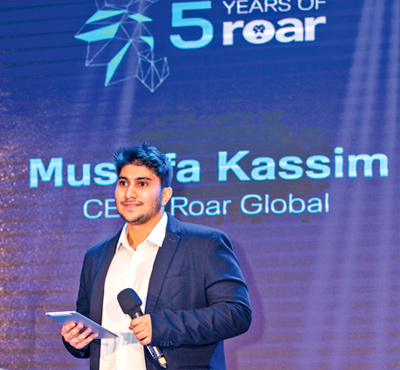 Mustafa Kassim, a young Sri Lankan entrepreneur and a media giant was listed under the Media, Marketing and Advertising category for Forbes 30 Under 30 Asia Edition, class of 2020. Mustafa is the founder as well as the Chief Executive Officer (CEO) of ‘Roar Global’ which is one of the most outstanding digital media companies in South Asia.

Mustafa’s ‘Roar Global’ is distinguished as an exception where it has been working to adopt new challenges, despite the health hazards and economic recession erupted during the Covid-19 pandemic situation.

For seven years, ‘Roar Global’ has been a trailblazer in the media and content landscape of South Asia. In addition to Sri Lanka, ‘Roar Global’ is having an office in Bangladesh while maintaining its registered presence in Singapore.

Roar Global’s staff comprises 70+ geniuses and wizards in the fields of digital and media. The south Asian audience is notably benefitted by Roar Global’s unprecedented media solutions and contents. Three unique media businesses which include ‘Roar media’ ‘Roar studios’ and ‘Roar digital’ are being operated by ‘Roar Global’.

Commenting on the adverse effects of the lockdown on his business activities, Mustafa noted that ‘Roar Global’ had to experience a significant reduction in revenue. He said that revenue had decreased even up to 70% during the peak of the lockdown. But as it has been declared in a popular adage that “every dark cloud has a silver lining”, Mustafa also noticed a considerable increase in the consumption of digital media with the pandemic getting prolonged. Moreover, he said out that there has been a significant increase in the consumers of the digital mediums which he treats as a positive impact on businesses. 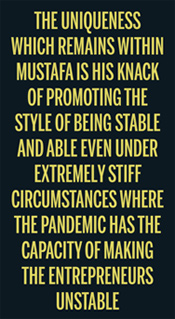 The unique feature, seen in the capacity of Mustafa as a young entrepreneur is his ability of comprehending and applying the fruitful consequences of this particular positive impact in his businesses to continue the required support to all his stakeholders and audience community by means of ethical business practices and informative and positive content, most significantly during the most toughest and difficult scary times, experienced by the world at large.

‘Roar Global’ is invariably a milestone in Mustafa’s life; with its establishment his desire of becoming an entrepreneur bore fruit. Mustafa is well armed with a degree in Economics at the California State University, Northridge which has given him not only the knowledge but also the much needed experience, required for the purpose of applying his competencies and skills with the business venture that he established.

The uniqueness which remains within Mustafa is his knack of promoting the style of being stable and able even under extremely stiff circumstances where the pandemic has the capacity of making the entrepreneurs unstable.

Albeit every business is engulfed with a vast of difficulties in their attempt of continuing with the business, Mustafa becomes an exception while setting an example for the upcoming entrepreneurs. None stands as the tower of strength for Roar Global other than Mustafa himself is.

His determination, courage, innovativeness, farsightedness, leadership skills and true sense of benevolence have brought him an abundance of popularity with enormous success.

Mustafa as an acclaimed, versatile, award winning and internationally recognised young entrepreneur emphasizes that the hard work, continued with sincerity and commitments would always bring you an ample of opportunities which can eventually lead you towards the path of success.