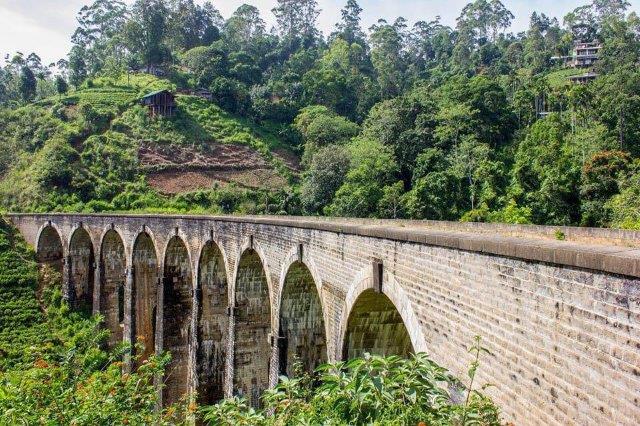 Nine Arch Bridge also known as Bridge in the Sky (Ahas Nawaye Palama in Sinhala) due to its breathtaking visual appearance is a famous attraction in Ella visited by local and foreign tourists. The artistic ingenuity of the Bridge and the beautiful landscape including mountains and tea plantations surrounding the Bridge are tourist attractions. If a person stands below the bridge and looks up, the sky can be seen through the nine arches of the Bridge.  Hence, it is popular as Ahas Nawaye Palama (Bridge in the Sky) among locals.

Spectacular vistas of the Bridge is enhanced and the environment creates a mystic and captivating scene when the famous ‘blue train’ (of Sri Lanka Railways) passes over the Bridge with ‘clicks’ from phones and cameras of the visitors who waited impatiently for the surreal moment.

If it is a misty day when clouds hang low in the valley, the scene is magnificent with the train passing through the mist creating a fairy tale ambiance.

Built at 3100 meters above sea level among craggy peaks of Central Highlands flanked by thick jungle and verdant tea plantations, majestic Nine Arch Bridge, a Colonial Era construction of early 20th century is a viaduct bridge. The Bridge is 25 meters high, 92 meters long and the width is 7.62 meters with nine spans.

P.K. Appuhamy, a local resident in consultation with British Engineers built this bridge which was commissioned by the British in 1941.

Situated in Gotuwala between Ella and Demodara Railway Stations, this spectacular bridge has been built with blocks of stone, bricks and cement without using a single piece of steel. According to history, when construction commenced on the Bridge, the work came to a standstill due to lack of steel caused by World War I. Hence, the Bridge had to be built without using steel. But the Bridge is solid from the period it was built to date.

There is a story behind this spectacular bridge.

According to the most popular story, P.K. Appuhamy, a traditional drummer and *devil dancer was returning home after losing a dancing competition when he met a British Officer. As Appuhamy was in traditional dancing clothes he had a devilish appearance and the British Officer was frightened.  Appuhamy inquired from the Officer about his whereabouts and heard that he was in Gotuwala to construct a Railway Bridge. Later, Appuhamy and the Officer became friendly.

As there was a shortage of labor to construct the Bridge, Appuharmy assisted the Officer by supplying him with labor from the Village. When the construction commenced, the Officer and his team of workers found that there was a quagmire in the valley below the location of the construction site of the Bridge. As it was not possible to create firm anchoring due to the quagmire, Appuhamy requested if he could construct it. The British Officer though reluctant to hand over the project to him initially, later allowed him to go ahead with construction.  Appuhamy and his team toppled giant rocks into the quagmire and filled the space and a firm bed of rocks was formed as the foundation.

He created the brick columns of the Bridge over the bed of rocks and completed the bridge. The construction project was cost effective and completed within a short period. The British Officer was happy and rewarded him well. According to folklore, Appuhamy returned to the village with four carts of silver coins. He gave each a villager a silver coin and enjoyed for many days with his relatives and neighbors.

Fact or fiction, this massive solid construction through which at least six trains ply on the up country railway line is very solid from the period of its construction in 1941 to date and will definitely last in the future too.

As Nine Arch Bridge is a popular tourist spot, it is better to go early in the morning to avoid crowds and view the breathtaking vistas surrounding it as well as take beautiful photos.