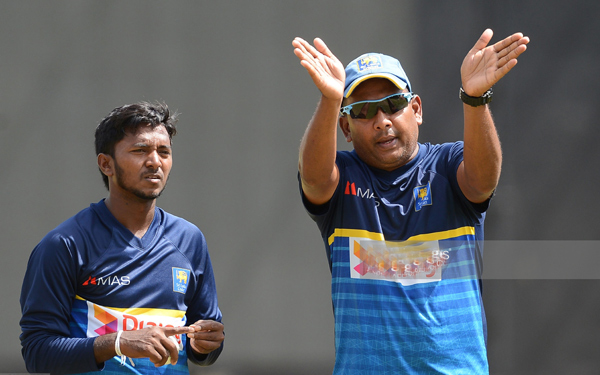 Piyal Wijetunga (right) with Akila Dananjaya during a training session

Piyal Wijetunag is back in the coaching scene and he has been appointed once again as the Head Coach of Spin Bowling at Sri Lanka Cricket (SLC).

He is one of the finest bowlers to emerge from Kandy and one of the most successful bowlers to come out of St. Anthony’s College, Katugastota having helped his team win several matches.

The left-arm spinner is a former President of the Old Antonians Cricket Wing. He played for St. Anthony’s under the leadership of Damian Nadarajah, Ruwan Kalpage and Suresh de Alwis for four seasons.

He was a fine left-arm spinner and a middle-order batsman. He toured England with the Sri Lanka Schools Under-18 Team in 1988 and also was a member of the schools team which toured Bangladesh for the Youth World Cup.

After that tour, he came in for high praise from K. M. Nelson who managed the Sri Lanka Team. He also toured Sharjah as a schoolboy.

The right-hand batsman is also a former Sri Lanka cricketer who played in one Test in 1993.

Though, he was not successful in the international arena, he was an active member in the domestic arena where he played 65 First-Class matches and took 161 wickets. He has served as a Spin Bowling Coach for the Sri Lanka Team for more than a decade.

Wijetunga, was born in Badulla but grew up in Kandy and it was the veteran Antonian coach Sunil Fernando who put him in the correct path.

Fernando’s prime lessons to his spin trainees were “concentration, hard work and dedication and if you want to be a good spinner, there are no shortcuts.”

As a cricketer he gave his best with the ball to his school and to the clubs he played. Wijetunga hails from a sporting family as his father Douglas and uncles’ Lionel and Oscar Wijetunga played football for Kandy and Oscar was a former Army SC and Defence Services goal-keeper.