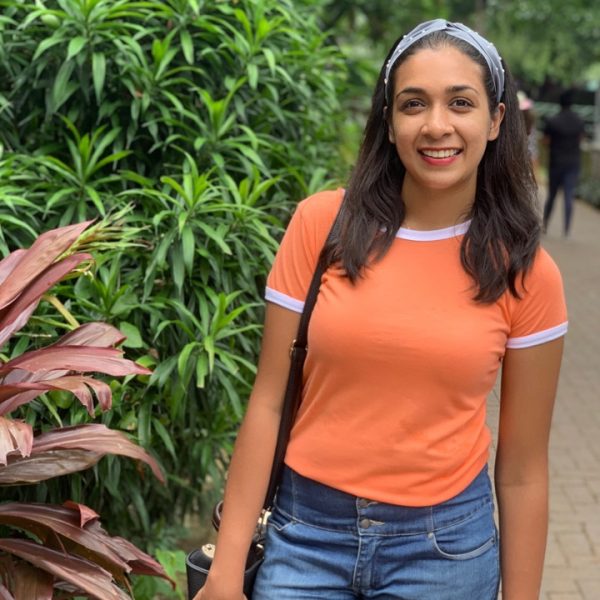 Any traditional Television broadcaster should possess characteristic attributes with excellent communication skills,which includes the ability to speak on-camera communicate well in a team environment. Communication skills required in a television broadcast both in front and behind the camera.Another vital area is passion as the contemporary viewing public could spot a ‘pseudo’ presenter  effortlessly. Sachini Nipunsla is such a competent presenter is genuinely aware what needs to be done forming a network with the audience.  A decent announcer like Sachini possesses solid researching skills to have the ability to reach the bottom of a story with applicable information. Another vital aspect is the aptitude to cope with pressure been able to meet deadlines. Of course, an ideal presenter should have leadership qualities to lead television anchor ever willing to help, guide and shape younger reporters behind the scenes as a mentor possessing abundant humanity virtues.All these qualities are possessed by Sachini.

Hewakalu Ambalage Sachini  Nipunsala born on 7th November 1992 in Boralesgamuwa as the only child to the duo Ajith Lionel a businessman and Shyamalee Peiris who is a housewife. Sachini is a reputed dancer and television presenter well renowned at TV Derana for well over a decade having co- hosted along with Madhava Wijesinghe  Derana “Little Star” for a ten consecutive years. Sachini is also a co host in the more popular Derana ‘Champions Stars Unlimited’ predominantly a ‘chat’ program  could be termed an amusing presentation along with Peshala and Madhava which is perhaps one of the most viewed television programs which is  very much different deviating from the usual formats.

Sachini had studied up to ordinary level at the Vidyakara Balika Vidyalaya in Maharagama then for her Advanced level at Vishaka Vidyalaya Bambalapitiya.During Sachini’s tenure at the former school she had participated actively in school’s drama and art circles also had been chosen for announcing for any school events for which had shown a intense aptitude and  skill, Sachini has had sufficient innate abilities not hereditarily affiliated to her parents.For a decade while in her school she had developed her innate ability to conquer the presenting inclination to a unprecedented high ebb.

During her tenure at the Vishaka Vidyalaya she had studied in the maths stream with the intention of studying a for a B.Sc degree.Sachini had her wishes come true for been able to complete a B.Sc Hons. special degree in Marketing Management at the Sri Jayewardenapura University in the year 2016,This achievement need to be commended as she had been compering ,presenting many programs at TV Derana. Assessing her television hosting and university degree studies which she had sensibly balanced to triumph over both.

From Sachini’s younger days she had been a sought after personnel for presenting had been a portion of many children’s programs in numerous television channels such as “Hapan Padura”,”Athuru Mithuru”,”Punchi Panchi”.also in “Ransith Yaya” as a backup artist. It was in the year 2006 that Sachini commenced her illustrious professional career as a television presenter in TV Derana hosting many programs at intervals like “Amuthu Muthu”,”Lassana Ahasa”,”Ammai Mamai” etc..

From the Derana “ Little Star” season 2 she co-hosted with Madhava Wijesinghe after which continuously hosted until the year 2021, the duo continued to host  to precision winning the hearts of all.. From the year 2014 to date she co- hosted the “Champions Stars Unlimited” the weekly program viewed by millions not only in Sri Lanka but by enthusiastic viewers in overseas countries around the globe.Though it was co hosted with Peshala and Madhava it is Sachini’s intermediation to the program that adds the much needed glamour, also as she knows many invitees by name and their skills.

Sachini in addition to been a host presenter afforded the opportunity to be a master of ceremonies hosting a ‘bridal show’ ‘vivaha’ also at TV Derana.Sachini was rewarded profusely when she was opted to be selected to be the red carpet host for Derana Film awards,Derana Dream Star,Derana City of Dance etc for  consecutive programs.Sachini was also unanimously selected to host the Sumathi Awards ceremonies for four years,which proved of her competency. Other than the above Sachini is a renowned as a prolific dancer.In year 2017 she accomplished advance cover for the song ‘Visekari” for which she had over three million views on you tube.With the inspiration she commenced a you tube channel specifically for dance covers consisting of “sepalikawo”, “Sandawan  Ruwin” and “ Sitha Umathu Wela”.In September 2018 she successfully conducted a Bollywood dancing workshop  at ‘Stretch Dance School’ Pagoda Nugegoda, which was patronized enthusiastically by many becoming a roaring triumph.Sachini’s expertise in dancing prompted her to inaugurate a dance studio “Studio Steps” to  impart her knowledge on Bollywood dancing.Sachini always endeavour to explore new ventures made a cameo appearance in the ‘soap opera” Sangeethe.In year 2021 her photo was incorporated in the Raffealla Fernando celebrity calendar along with many other Sri Lankan celebrities.

Sachini married Isuru Shanaka Randeniya, her long standing fiancé’ from Daham pasel days,He is a business analyst works for a reputed company. The wedding was delayed as the duo wanted to put up a house of their own, had collected money to build their own house.Many will not believe that they had constructed a house complying to their wishes in Maharagama area which had cost Rs 1.6 million both contributing exactly half.But as  the parents place was a bit far had rented out their new house and had rented out a house closed to the parents house in Boralesgamuwa as Sachini wanted to have mothers cooked meals to consume when she was busy at work.

The venue of the wedding was a temple held in March 2021.The duo wanted to have a wedding sans many contemporary styles. The duo had planned only for just three months with a very fewer number of invitees other than the immediate family members.There were no bridesmaids, bestmen,flower girls and page boys.The two had decided to remain in their wedding attires for the going away.The duo wanted to have the wedding sans any stress. At the temple they had organised an ‘alms giving for the monks.However like in any other wedding they had obtained the best services from reputed personnel for poruwa, photographs, flower arrangements, makeups etc.The manner the weeding was planned was not very fruitful like a contemporary wedding but everything had gone to precision sans any stress for the duo in particular.

From the above it is clear that Sachini Nipunsala has climbed the ladder to stardom is already a celebrity in the field of art in Sri Lanka.It would be the fervent hope of all art loving audiences that she would continue in the same vein to contribute immensely in presenting and in other areas she is well versed in to deliver to many audiences in Sri Lanka and overseas.