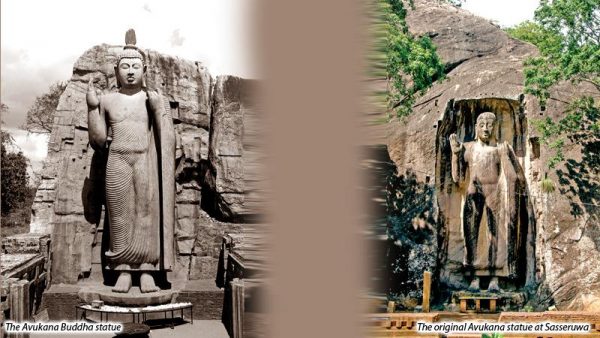 The difference between the Buddha statues at Sasseruwa and Avukana are: 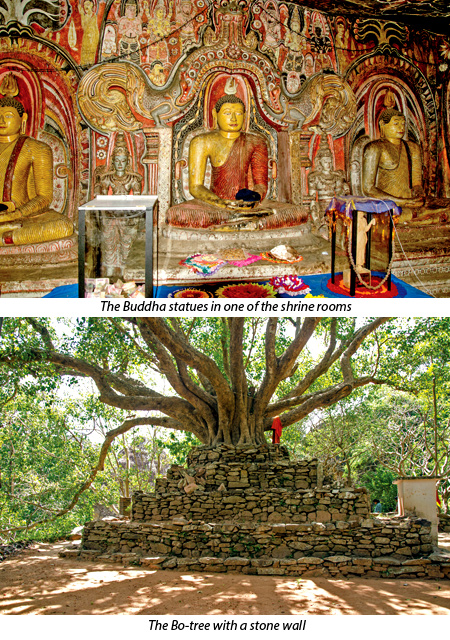 Kurunegala, the capital of the North Western province, has a historical name Hasthishaliyapura (elephant rock city). It was the capital of Sri Lanka and is full of legend, romance and history. Straddling the entire province are vast complexes of ancient rock cave temples, forest hermitages and natural tanks which date back to the medieval kingdom of Anuradhapura.

The most awe-inspiring is the Buddha statue at Resvehera or Sasseruwa where the first colossus stands majestically amid the dense jungle in deep corner of Wannihatpattuwa bordering the Anuradhapura district. Travelling from Kalawewa and turning in at the Avukana Road, we reached the Sasseruwa temple after about a 30 minutes’ drive.

We proceeded along the partly tarred and partly gravel road to the temple which was lined either side by jungle, shrub and lush green paddy fields and dotted here and there with small houses. Passing a shady tree-lined pathway and a tank full of pink lotus blooms, where village children pick flowers to sell to visitors, we stepped on to the temple premises.

I felt fortunate to visit the little known historic Sasseruwa rock temple also known as Resvehera Rajamaha Viharaya at Kuda Kathnoruwa. The temple is in an elephant infested area called Meegalawa, on the boundary of the Mahaweli System-H, overlooking the reservoir Kalawewa. What attracted me here is my lifelong love for archaeological sites, and sacred places which are so important to the history of Sri Lanka. Places like these have been central for much of my work as a photographer. This rock temple is of immense archeological importance considering its historical value.

Gaining importance after the Anuradhapura, Polonnaruwa and Yapahuwa periods, Sasseruwa rock temple has a history that spans 2100 years, dating back to the period of King Walagamba. The king was the architect of the temple. The extent of the areas is 1,468 acres. It is famous for the Dethispala Ruha Bodhi planted by King Devanampiyatissa in 247 BC.

Legend has it that Budu Res (Rays of light) emanated from the Buddha statue when the Bo-tree was planted. The centuries old Bo-tree at the site spreads its branches around and stands majestically in front of the shrine cave. A 10-feet-tall stone wall is erected around the Bo-tree. This is a rare feature in Sri Lankan temples.

Sasseruwa is significant in many ways. One is the main shrine cave containing an image of the reclining Buddha statue where the original robe, which covered it, is still visible at certain places. This is the only Buddha statue of a rock temple where a pilgrim could walk right around it in veneration.

The other unique one is 42’ 4’’ tall colossus which stands majestically on the top of the rock amid a forest canopy. It was carved out of a rock outcrop, resembling the more famous statue at Avukana.

History reveals that the benevolent tank builder King Dhatusena, who built the mighty reservoir called Kalawewa, wanted the Supreme Being to overlook his mundane efforts. He wanted to build the image of the Buddha as big as his work, on the bank of Kalawewa. 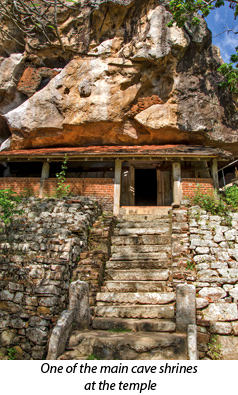 Then, the Avukana Buddha statue was commissioned to be built. Sasseruwa was the first place chosen to build the colossus Avukana Buddha. As the work proceeded the monarch had a suspicion about the strength of the rock. He, therefore, abandoned the site and chose another at Avukana, close to Kalawewa. However, the sculptor continued his work and created a masterpiece of a Buddha image at Sasseruwa. He sculpted the most beautiful image into the rock. He sent his pupil to do the monarch’s bidding. The Avukana Buddha statue at Kalawewa is slightly taller than the original at Sasseruwa.

During my stay of a few hours at Sasseruwa, I began to realise the marvellous craftsmanship of our ancient sculptors and see their stone creations. There are also around 99 rock caves scattered around the rocky mountain of Sasseruwa which had provided shelter to Arahat Bhikkhus in the past, according to chronicles. Today most of these caves are home to wild animals.

When considering the ancient value of the Sasseruwa temple, its wall paintings in the cave shrine seem to belong to the Kandyan period. A flight of rock-cut steps leads to the Poya Geya where a Makara Thorana, decorates its entrance.

The furniture in the temple has immense antique value. I also found a heavy wooden bed, ancient and still intact, made of Ma Vevel said to have been donated to the temple by a carpenter. It was placed in the corner of the shrine room in the cave. 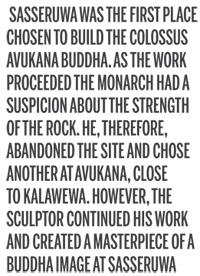 On one side of the temple is a small rock enclose said to be the Pattini Devale. Here a replica of the Goddess’ symbol and an anklet can be seen. The door to the Devale is closed on the oil anointing day.

Village folk stop all activities at their homes after offering vows at the Devale and cooking milk rice after cleaning the Devale floor with fresh cowdung. There is also a belief among the villagers that a cobra had guarded the temple. The villagers say that a 14- foot discarded snake outer skin had been found in the rock cave shrine in 1980.

The Archaeological Department had undertaken construction work of the roof of the shrine rooms and also renovated some faded murals in the cave. The ancient preaching hall in the temple is also severely damaged due to rain water dripping from the roof.

The present development work of the temple was initiated following the Accelerated Mahaweli Development Program, which commenced in early 80. Since Sasseruwa temple belongs to the Mahaweli System-H, the whole area had developed and the temple became a religious site for pilgrims who visit the most famous Avukana statue, just 12 kilometres away from Sasseruwa.

A notable activity in this religious site is the Daham Pasala (Sunday school) which is attended by around 50 village children. Enthusiastic villagers take part in the activities of the temple and offer their unstinted support to make all efforts a success.