“Small is not that beautiful”

Once upon a time, there was a cunning trader in a remote village by the jungle. As he found lots of monkeys in the village, he thought of making a fast buck with the monkeys. He said, “I have come to buy monkeys, and I would pay $10 for each monkey!” The villagers, one by one started catching the monkeys and brought them to him. He bought all and put them into cages. The news about the “monkey-trading” quickly spread throughout the village.

As monkey-trading soon became a money-spinning business in the area, villagers gave up their usual livelihood work and started catching and selling the monkeys. Within a couple of days, there were no more monkeys in the area.

Demand-supply imbalances began to work: The trader increased the price of the monkeys to $20, and started buying at a higher price. Villagers began to sweep the jungle, and deep into the jungle looking for monkeys. After some time, there were no more monkeys even in the jungle.

The price went up to $30, and then to $50, but villagers could not find more than one or two after exhausting many days in the deep jungle.

The trader said that “In case you find the monkeys I will pay $500 each when I come back in few weeks”, and took the stock of monkeys in trucks, and left.

A few days later, something else happened, to the amazement of the villagers: Another man came to the village with a few trucks and stopped there for a while. As some villagers were peeping at the trucks curiously, the truck driver happened to open one of the trucks.

It was cages full of monkeys! And the villagers saw it, panicked, and gathered around the truck. The man was puzzled, and asked them: “Why do you all circle around here? Why are you so surprised? These are monkeys, and I am a monkey trader.”

The villagers asked him impatiently: “Do you sell them? What is the price for a monkey?”

The trader answered: “Well, I must tell you that nowadays it’s very difficult to find monkeys.” Of course, villagers knew it all about. He said the price: “I wouldn’t sell a single one for anything less than $250.”

Nobody thought of bargaining on the price. Why should they, when they were confident that they would keep a 100 percent profit margin by trading the monkeys at $500 each? They all started buying the monkeys. The problem was that the villagers didn’t have enough money to buy as many monkeys as they wanted, because the price was so high compared to what they earned earlier – $10 or $20 for a monkey. Then they started selling their stuffs and mortgaging the properties to buy monkeys.

All the monkeys in the trucks were sold out, and the trader left. The villagers looked after the monkeys well, expecting the other trader to return to buy them at $500 each. But he never turned up. What they didn’t know was that these were the same monkeys they sold earlier for much lesser prices.

I had learnt the above story a long time ago. But I remembered it repeatedly throughout the past 10 years, whenever I heard the news about stock market manipulations and volatility. After I heard it again a few days ago, I thought of writing about it today.

Colombo stock market; sometimes, it became even one of the “best performing” stock markets in the world, but not for long. Similar to the way it went up, it went down too.

The stock market is where company stocks of the listed companies are traded. The buyers and sellers range from individual smaller investors to larger investors, who can be based anywhere in the world.

The larger investors may also include individuals with sizable investment funds in hand as well as institutions such as banks and companies, and various funds which pool individual contributions. On the top of all that, there can be even government-managed funds too.

Stock exchange traders execute the buying and selling orders on behalf of all these investors. Stock exchange markets can exist physically in a particular location as well as virtually as a network of computers, either way facilitating stock trading.

Barometer of the economy

The stock market is a barometer of the economy at macro level and of companies at the micro level. If we like to sense a “real time” economic performance of a country, the stock market is one of the best places to look at, but with caution.

The buyers and sellers in the stock market are two types: investors and speculators. Investors are motivated by long-term economic and company performance so that their investments are also long-term. If such investments are growing it is a healthy sign of the economy.

But speculators look for “quick bucks” and get out. While investors are interested in the long-term increase in the value of their stocks, speculators want to buy at a low price with speculation to sell at a higher price as soon as possible. But there could be repercussions here.

More importantly, some have got the “upper hand” in the stock market to exercise control over stock prices resulting in undue gains for themselves at the expense of genuine investors; this is where the problem is. Why? One important issue is that the market is too small to accommodate too big fellows. 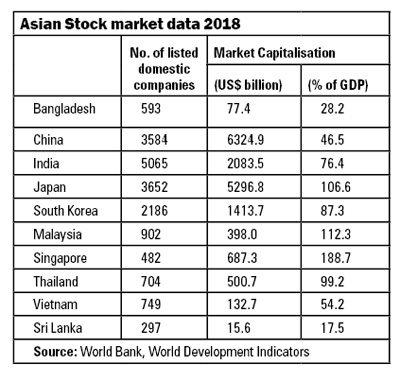 The biggest problem of the Sri Lankan stock market is its “small” size. “Small” is not always beautiful, as it can sometimes be “dangerous” too. The small size can make the market vulnerable to manipulations.

The problem is that someone who has a sizable amount of money in hand has the ability to buy low and drive the prices up, then sell high, and get out! This act may put all other investors in trouble, and even the economy in trouble.

On top of that came the biggest fellow who has absolute powers to shake the market – the government, with a big public fund such as the EPF! Someone may argue that the government can boost a sluggish market by entering into it benefiting the economy. True; but at the same time, it is also true that it has the ability to help someone to sell the monkeys at $250 each, and get away.

After all why the domestic companies are fewer in number and smaller in size is not an issue that can be sorted out within the boundaries of the stock market. It is a policy and political issue that has to be dealt with separately.