Yet another fascinating story on this fortified British Bastion, the biggest “natural harbour in the World,” named Trincomalee, also consisting several smaller Islands or rock

formations,around it, the largest of which was “Great Sober Island”, a strange name, indeed, on first glance, but on further perusal of this extremely interesting article, we find out that it was named after a certain young British Naval Lieutenant named S.Sober.

This certainly does not mean that this young guy was tee-total, as a matter of fact, this writer served for nigh on 8 years, in the Royal Ceylon Navy, and could not vouch for the fact that a single Navy man, that he knew, drank only Orange & Lemon Barley water. Anyway, let me take the chance to say “thank you” to D.Joseph for this most interesting “piece” on the Great Sober Island of Sri Lanka. 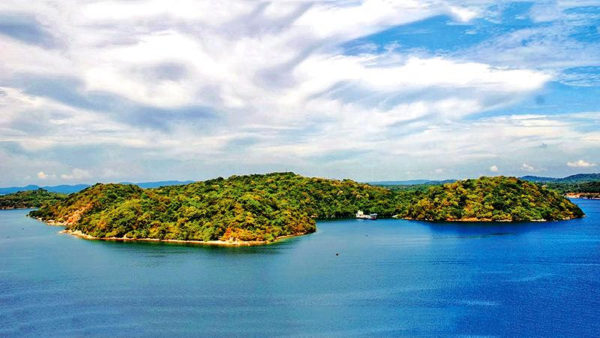 For centuries Trincomalee has been a strategic maritime port. Its unique rock formation and assortment of islands made it one of the most heavily defended places in the history of Ceylon by the British Navy. The largest and most fortified island is named Great Sober Island, a tropical land mass rising 200 metres above sea level and covering an area of 175 acres.

During the British occupation it is estimated that up to 1,000 soldiers and sailors were able to camp here on transit, before being deployed to the Mediterranean. We set out on an expedition to explore this amazing place and discover the gun emplacements and fortified structures that still stand. I was accompanied by Lieutenant Commander Mark Ratnayake, from the Eastern Naval Command. We boarded an Inshore Patrol Craft, commonly referred to as water jet among sailors.

The craft sailed past some small islands. A few merchant ships were visible in the distance. From about 300 metres the shoreline of Great Sober Island came into view. As we pulled alongside the pier a few sailors helped secure the boat. The tropical aura was overwhelming. We were now joined by our guide, Petty Officer Priyashantha, stationed on this island. He explained, “Sober Island was first occupied by the French under Admiral Jacob Blaquet de la Haye in 1672. The British took over the island after the Treaty of Paris in 1784 and later developed it for their military requirements. The place was named ‘Sober Island’ in memory of a young British Lieutenant S. Sober. As Trincomalee became the home of the British Eastern Fleet, they fortified the island with a battery of medium guns and one main gun”.

We began our jungle trek in earnest. After walking for about 15 minutes we came across a stone monument with an anchor and the numerals 45 engraved on it. This could be an indication of the height of the elevation or perhaps the position of a British troop. The dense foliage strewn with rocks in some places added to the feeling of adventure. The Petty Officer pointed out that there were deer, porcupine, rabbits and jungle fowl here and cautioned us about snakes and a resident python who had been spotted on a few occasions.

Walking further we came across the first gun position on Great Sober Island. It was a massive iron tower rising exactly 24 feet from the ground, supplemented by a concrete room- which would have been the storage for the ammunition. The gun tower has been fitted with a ladder, and iron rings at regular intervals, for safety. We cautiously climbed to the top. It must be emphasized that climbing this gun tower is not advisable for those with a fear of heights. The platform on top had been reinforced with an iron plate.

The old gun is no longer here but judging from the steel bolts we can assume it was a medium calibre weapon. The 360 degree view from here was stunning. Lt. Cdr. Mark pointed out the oil tanks, which were visible across the water. There were 101 tanks built by the British. He said, “From here you can see many of the islands that give Trincomalee Harbour its natural defensive formation. Just across is Little Sober Island with a land mass of about 60 acres. Then there is Powder Island, Round Island, York Island, Chapel Island, Norway Island, Elizabeth Island and Elephant Island. Apart from this the British established some navigation points known as Foul Point (where there is a Light House), Flagstaff Point, Eagle Point and Clappenberg Point’. We climbed down and after a while we were back on the trail. Wild orchids in full blossom, and creepers hung above our heads .

We came across the first of many twin gun positions, the walls of the gun turrets almost 3 feet thick. The brickwork and cement has stood for more than 300 years. The concrete bunkers showed the brilliance of British naval engineering. Petty Officer Priyashantha led us down a flight of 12 steps into the heart of the bunker. There were five ‘powder rooms’- where shells were stored. We could see another room possibly used by the gun crews to store their rations and cook. The heavy guns had a good vantage point and could fire a volley of shells at enemy ships. The trees and creepers concealed the gun positions. It is believed the British had used elephants to drag the heavy gun parts up these hills. From here we walked further before coming across a unique structure- a fortified gun wall.

Here there was a cluster of five gun positions with a distance of about 15 feet from each. The massive bunker had its own tank for collecting rain water. On one wall we were surprised to see the English alphabet carved into the wall with each alphabet being assigned a set of numerals- some sort of British code for transmitting firing signals.

The prudent naval engineers had installed an iron belt mechanism that lifted the shell from the underground storage, to be manually loaded into the gun. This iron mechanism is still perfectly intact! This amazing gun wall would have had a crew of 20 men stationed for duty.

By now it was pretty hot, but there was shade from the trees. A few inquisitive monkeys eyed us from a mango tree. After trekking another 15 minutes we came across the ‘mother’ of all guns on this island. The Main Gun turret was actually similar to a building.

It had a circular concrete outer perimeter. The massive gun would have weighed 10 tons (a similar gun can be seen at Ostenberg Ridge-Trincomalee). Today all that remain of the super gun on Great Sober Island are the 48 iron bolts that held it to the ground. This super gun had its powder rooms and staff quarters.

From here the crew can fire in a 300 degree turn, as the gun was rotated. It was the primary defence to protect the approach way to the Trincomalee harbour where the British Eastern Fleet was anchored. It is believed that once the British were ready to leave this island they had dismantled their guns, towed them to sea and sunk these massive weapons.

After climbing down a short iron ladder we came across another surprise. There were a row of stables for the horses. Without using wood these stables were made out of concrete- which shows the important role of the horses. It required speed and energy to travel between the gun batteries and British officers would mount their horses for this task. Each stall could hold two horses.

The British Admiralty realized that the men on the island needed some recreation. Manning these heavy guns by day and night would have been tiring. So they created some entertainment where the men could unwind and relax. Petty Officer Priyashantha led us down 112 cemented steps to a pristine area called Orlando Beach. The turquoise waters were refreshing. Here British gun crews and visiting ship crews would swim and enjoy a BBQ. We had spent 2 hours on this expedition.

The Sri Lanka Navy has performed an excellent task in preserving these maritime gun positions, and maintaining the privacy of this island. A small modern restaurant and few rooms are operated by the navy for visitors on one section of this massive island. Those desiring to explore the island must do so with a navy guide and prior permission. Great Sober Island is a testament to the British Navy’s coastal defence planning.