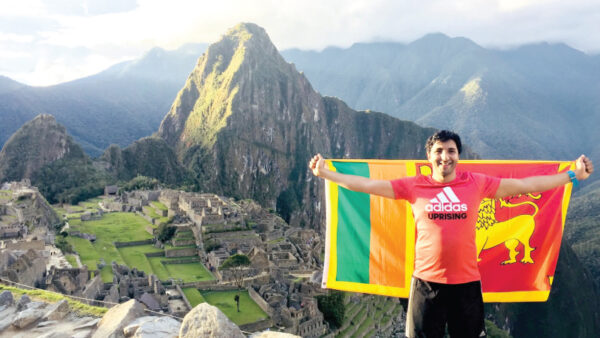 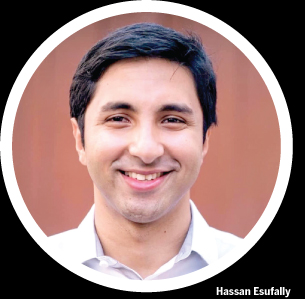 Varsity Magazine sits down with Judge Business School student Hassan Esufally, the first Sri Lankan in history to run a marathon in every single continent.

When the moderator at the Cambridge Union’s talk with Bear Grylls opened up questions to the floor, the hand that shot up first was that of Hassan Esufally, a Masters student at the Judge Business School in Cambridge. Esufally wanted to ask his childhood hero how he could follow in Bear’s footsteps and make a financially sustainable career out of being a professional adventurer. It is an understandable question; after all, who has not felt inspired to get off the sofa and climb a tree, swim in a river, or chow down on a maggot after binge-watching a few episodes of Man vs. Wild or The Island?

Unlike most armchair adventurers, however, Hassan’s dream of emulating Grylls and completing the Explorer’s Grand Slam (climbing the highest peak in every continent and skiing to both the North and South Pole) seems the natural next step for a man who became the first Sri Lankan in history to run a marathon in every single continent including Antarctica.

I sat down with Esufally in an upstairs room at the Cambridge Union just one week after Grylls’ visit. He does not look like what one would expect of an ‘adventurer’, trading khakis for a suit and tie and with no sign at all of an unruly Wim Hof-esque beard. But as Esufally lists his many remarkable achievements – taking his running shoes through the African Savannah, the Antarctic ice sheets, and the Andean mountains of the Inca Trail to name a few – there is a hint of the sheer willpower and determination that would spur someone on to do such feats behind his easy-going exterior.

We reminisce about his first marathon, completed when still an undergraduate student in Melbourne, Australia less than a decade ago. “My friends just laughed and said you are never going to be able to do it,” he recalls, “but I said ‘you know what guys, I am going to try it and prove you wrong and do it anyway’.” Three months later, as he crossed the finish line, he became instantly addicted to the “feeling of achievement, satisfaction, and accomplishment” that comes with the completion of the 42.195 Km race. From there in Melbourne, the idea of joining the exclusive seven Continents Marathon Club (comprising 388 members as of the end of 2021) was then born.

So, what spurred this desire? Esufally explains: “I wanted to do something amazing for my country and raise awareness that Sri Lanka could be a country where people can follow their dreams. I wanted Sri Lanka’s profile to be raised in other areas, not just cricket.” There is also a fundraising aspect to Esufally’s feats, raising money for underprivileged children through UNICEF Sri Lanka when participating in the Ironman challenge (a 3.86 Km swim, 180 Km bike ride, and 42.2 Km full marathon in a 17-hour time limit), as well as for victims of the Boston Marathon bombings when completing the same marathon in the USA.

Then there is the support of his wife, Esufally’s “biggest supporter and biggest fan” who waits for him at every finish line. I remind him of his friends’ doubts before his first marathon and ask whether the desire to prove people wrong is a contributing factor: “It is about proving yourself right more than proving people wrong.”

“I am someone who is big into visualisation and goal setting,” claims Esufally, as he remembers the five goals he set himself for the five years following his graduation from Melbourne: to marry the girl of his dreams, get his dream job, achieve dual Sri-Lankan-Australian citizenship, complete an Ironman, and become the first Sri Lankan in history to run a marathon on every continent.

He completed all five half a year early. “I was imagining myself crossing the finish line in Antarctica with a Sri Lankan flag in my room back in Sri Lanka, and it happened. I think that if you genuinely believe in those universal laws, you can manifest anything you want into reality. But you have to put in the work as well, I think that is one of the formulas for success.”

Esufally’s advice to young people who want to do amazing things? “You need to work hard, you need to be persistent, you need to write down your goals, you need to have the bravery and courage to say it out loud sometimes.” These are not groundbreaking revelations, indeed, many of them sound like they could have been ripped straight out of a fortune cookie. However, they take on much-added weight when coming from someone who has run a marathon in Antarctica, as opposed to a tech bro telling you how he managed to double his investment in Dogecoin and is now expanding his NFT portfolio.

On the subject of Antarctica, one does not need to be a geographer to know that it is cold. Very cold. Minus-25 degrees Celsius cold, in fact. Sri Lanka on the other hand is hot. Celsius 30-degrees worth of hot to be precise. Esufally laughs: “Bit of a temperature difference, 55 degrees, give or take.” The logical next question is how on Earth can you train for an ice marathon in a tropical climate, to which Esufally replies with a grin: “I actually found this factory owner in Sri Lanka, put my treadmill in the back of my jeep, drove to the factory, then put it inside their ice-blast refrigerator and ran on it in minus-20 degrees, wearing all the clothes I would take with me to Antarctica.” He adds: “It actually went viral back home” he said with the self-awareness one can only achieve after having spent months, lycra clad, running on a treadmill in an industrial fridge.

Fridges aside, the road has not always been smooth for Esufally. He recalls how he twisted his ankle halfway through the Inca Trail, a trail that traditionally takes three nights and four days to walk, with runners given a time limit of 14 hours to complete what is considered the hardest marathon in the world. When asked why it is so difficult, Esufally opens up a Pandora’s Box of non-ideal running conditions: “You are starting in complete darkness at 4 a.m., you are running through the Amazon rainforest so your clothes get wet, you can get lost from the track, and there is obviously altitude to deal with. It is difficult to breathe and, coming from Sri Lanka where there is no altitude except in the Hill Country, it is not easy.”

It is at this point that the interview wraps up. Esufally needs to run, he is off to Morocco for a bit of training in the desert in preparation for the next things on his hit list – the World Marathon Majors and summiting Mount Kilimanjaro. Before we part, he slips in the fact that he is writing a self-help book about the lessons he has learned. If there is one thing Esufally’s story teaches us: when life seems like an uphill marathon, zip up your parka, open that fridge door, and keep on running.