Certainly, 75 years is a long period. It is a triple quarter centenary; more than a Diamond memory; Just a quarter less than a century. It is a well-fit occasion to be commemorated.

Etymologically “Le Goc” means “The Cheerful Man”. True to the word, great in all respects, Fr. Le Goc was a cheerful person. His childlike simplicity, his charming and generous manner won the hearts of all.
Today, as a teacher of St Joseph’s College, Colombo for almost 40 years (Of which I was the Principal of the Middle School for 10 years and another 10 years Principal of the Upper School) I am fortunate to have got an opportunity of writing on that great Rector, the unique Frenchman Very Rev. Fr. Maurice James Le Goc.
In his lifetime he was a legend. He was highly respected. He was a celebrated scientist, an astronomer, an architect, a builder of high degree, an educationist of great calibre.

He was also a man of intrepid faith, who renounced his fortune, glittering positions and dedicated his life for the service of God and Man.

Fr. Maurice James Le Goc was born on 21st February 1881. He had his early education in the Christian Brothers’ School in Quimper. 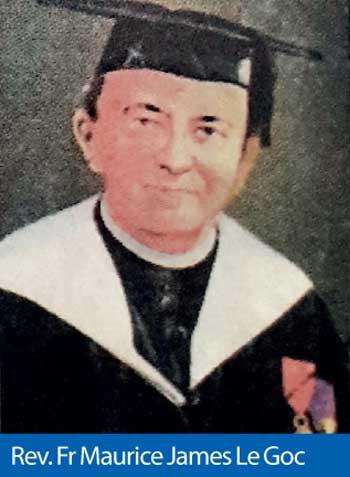 When he was 20, hearing a call from God he entered the Seminary of the Congregation of the Oblates of Mary Immaculate (OMI). He did his BSc and MA in London and his Doctorate in Rome. He was renowned as a botanist and astronomer. He was ordained a priest on March 13. 1907 at the age of 26 years.

In 1914 he arrived in Sri Lanka. He was appointed to St Joseph’s College and was made the head of the school’s Science Department.

In 1919 Fr. Le Goc was appointed the Rector of St. Joseph’s College. While being the Rector he was also a teacher of science especially botany, biology, zoology and astronomy.

He has written a book titled The Text on Tropical Botanic, used not only in St Joseph’s College but in all the schools in the Island, as a text book prescribed by the Department of Education. This book was also made a text book in India.

He perfected the College Laboratory. The entire Island sought the assistance of Fr. Le Goc in the improvement of school laboratories, and this assistance he gave willingly and happily.

Fr. Le Goc was also a great exponent in nature study. His book Chapters on Nature Study became the standard text book in Sri Lanka as well as in India. As a botanist, the teaching and the practice of the subject was his great love.

His collection of local flora made the college botanical garden remarkable. He was also a very valuable member of the Ceylon Natural History Society.

He was also active in extensive research work, especially on Nature Study. His research and studies on Sri Lanka’s Madu Tree found him recognition in the international field as well.

The Sri Lankan Government was quick in taking advantage of Fr. Le Goc’s exceptional talents, his reputation as a scientist and botanist.

Once when Sri Lankan scientists, especially botanists, failed to find the cause for an unknown disease that was threatening the Sacred Bo Tree (Sri Maha Bodhi) at Anuradhapura, Fr. Le Goc was requested by the Government to investigate the cause. He discovered the cause and helped to preserve up to this day this great historical and religious treasure of the Buddhists. Fr. Le Goc also lectured at the Ceylon Medical College and the Teacher Training College. He lectured to University students and technological students. He was on all the councils of education.  In this circumstance of the study of natural science, in its theory as well as in practice, Fr. Le Goc started the St. Joseph’s College farm at Waragoda, Kelaniya.

It was a place for the college students to experiment with the agricultural ventures experienced mostly by the village-lads. It was an eye-opener and experience of a lifetime to handle the garden soil and the organic manure of the farmyard. It was also the vision of Fr. Le Goc to get the students to know and experience the dignity of labour.  Fr. Le Goc showed the importance of the study of astronomy in our schools. He wrote a book on astronomy providing the reader with an introduction to the mystery of the skies.

Fr. Le Goc was also an architect. His knowledge in architecture is fully well exhibited when one looks at the beautiful massive buildings of St Joseph’s College.

Everyone is impressed by the layout of the college buildings on the campus, the spacious and open grounds, and the beautiful environment and the atmosphere it creates.  The magnificent Chapel in the centre designed and built by him to that style of the Church of St John Lateran in Rome is a very well-fitting living monument to him.
While being the Rector of St Joseph’ College Fr. Le Goc, with the object of quality education in his mind, founded St Peter’s College at Bambalapitiya, which was then called St Joseph’s College South. He also started St John’s College, Dematagoda and St Paul’s Waragoda, Kelaniya. Fr. Le Goc served first as a teacher at St. Joseph’s College for four years (1914-1918) and then as a Rector for 21 years (1919-1940) thus altogether 25 years at St. Joseph’s College.  After his retirement from the college in 1940, he was appointed the Vicar-General of the Archdiocese of Colombo.

His death was shocking and tragic. When on his usual daily routine journey to St Bridget’s Convent for the Holy Benediction, an out of control military vehicle hit his car at Ward Place.