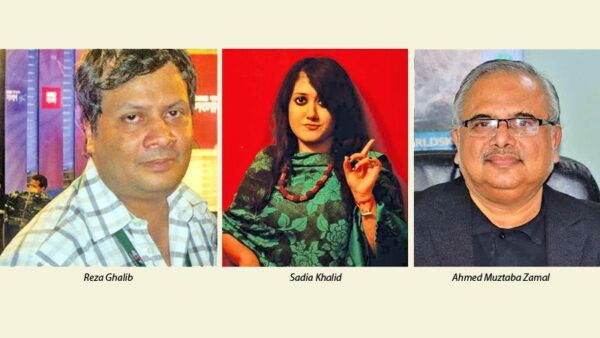 There has always been an interest and curiosity in the Western world in understanding more about Asian societies and cultures. Cinema has been an amazing window of intensifying this curiosity productively and it is a fine tool we Asians have been using for decades to tell our stories to the other part of the world through the artistic use of cinema.

West Meets East Screenplay Lab is one such productive attempt of the Dhaka International Film Festival (DIFF) aimed at bridging the gap between the Western film industry and filmmakers from the East.

After the successful events for the past three years, West meets East has upgraded to the next level and at the beginning of this year, DIFF introduced West meets East screenplay Lab where selected filmmakers of the region are given an opportunity to network with professionals including producers, distributors and programers from the global industry. After monitoring at the Lab, the successful participants will pitch to potential international collaborators through the Film Hut at DIFF 2022.

Recently after careful deliberation of a five-member international jury board, the finalists of the West Meets East Screenplay Lab were announced and Malaka Nilwala, a young filmmaker from Sri Lanka was also selected. 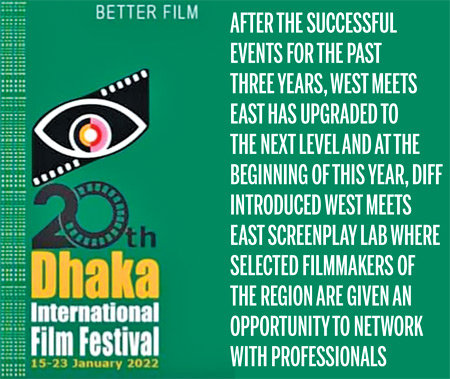 The Sunday Observer had an exclusive e-interview with the Festival Director, Ahmed Muztaba Zamal and the organising committee members of 20th Dhaka International Film Festival, Sadia Khalid and Reza Ghalib.

Excerpts of the interview:

Q: What is the purpose of West meets East screenwriting lab?

A: We have beautiful and compelling stories from our region that deserve a spot on the world stage. Our mission is to turn these stories into scripts and connect the film-makers to international producers, so the films can get made and receive the attention they truly deserve.

This is the fourth edition of West Meets East and the first edition of Film Hut where prominent film personalities from all over the world gather to exchange knowledge, network and collaborate on meaningful projects that aim to eliminate cultural barriers.

Q: Were submissions restricted to a particular theme and how many submissions were received and from which countries?

A: Filmmakers from Bangladesh, India, Nepal, Afghanistan, Maldives, Bhutan and Sri Lanka submitted feature length fiction projects with the logline, synopsis, director’s statement, treatment and director’s profile. We received so many brilliant projects that the juries had a really hard time leaving out some of the projects. We didn’t restrict the scripts to any particular theme.

Q: Who were the jurors of the screenwriting lab and what do they have to say about the submissions and creativity?

The jurors were overwhelmed by the quality of the projects and congratulated not only the winners, but also the projects that couldn’t be selected. These projects hold immense potential in terms of story and visuals, they stated in their deliberation.

Q: What is the main criterion that you considered in the selection process?

A: The story and the visual prospects were given priority. The writer/director’s experience and understanding of cinema was also taken into consideration.

Q: When will the West meets East screenplay Lab be held and what kind of assessment and facilities have been planned for the winners?

A: The screenplay lab will be held from January 16-19, 2022, as a part of the 20th Dhaka International Film Festival which will host promising film-makers from all over South Asia. All 11 of these projects will be mentored at the lab and pitched at the Film Hut at DIFF where film producers and distributors, including OTT representatives will be present to bid.

Q: How has the pandemic affected the screenwriting lab?

A: This is the first time we are organising the Screenplay Lab and Film Hut. In previous years, West Meets East took place in a seminar format, which had the highest engagement this year. The Covid restrictions forced us to go hybrid, with a limited audience in the physical venue and live broadcast on Facebook. Our reach was much more due to that and we started conversations around the topics discussed such as international co-production, festival strategy and OTT revolution.

Q: Right now what is your assessment about the future of the film industry in South East Asia and your message to young and upcoming filmmakers in Sri Lanka about the opportunity that DIFF holds for them?

A: We compliment the Sri Lankan writers and directors on the projects that they had sent in. They were beautiful. There is so much potential in the young filmmakers and they can benefit from the networking and funding opportunities DIFF holds. We look forward to more incredible projects from Sri Lanka. The more we collaborate regionally, the greater the chance for South Asian cinema to have a lasting influence in the world.

A: DIFF is organised by Rainbow Film Society, which started its journey in 1977. The festival is the largest film festival in Bangladesh that welcomes around 200 films and over 100 foreign delegates each year.

The submission deadline for DIFF 2022 concluded on September 30. We don’t have any strict restrictions for the theme of the films; however, the films should not have any record of being screened in any other Bangladeshi film festival before DIFF. Downloadable links for preview with government censor clearance is a must.