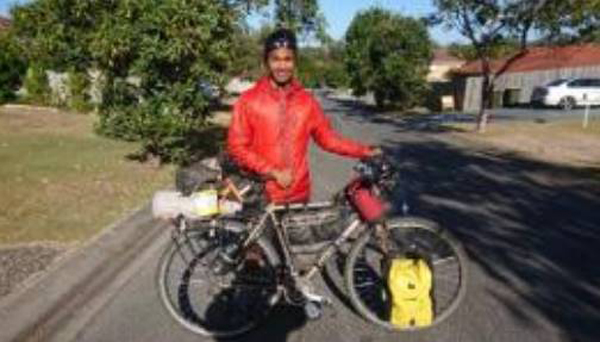 We were so happy to meet Arith reaching Brisbane on his round trip covering all States of Australia.

A young man aged 24 finishing his degree in Hospitality Industry in University of Sydney set about in the expedition around Australia only on a push bicycle. Arith carries very few belongings on his bicycle. His sleeping tent, camera, mobile phone, minimal cooking gear and cyclist’s water carriers. It’s admirable the courage he has to explore the country, nature and people. He has experienced life, meeting the nicest people in different states of Australia in his expedition.

The challenges he faced were many and his stories are really inspiring. Sleeping in his travel tent securing his precious bicycle, crossing the desert, experiences of dry thunderstorms with heavy lightning and thunder, causing bush fires around his sleeping tent, Arith has undergone a few near-death situations on this journey. He talks about many amazing characters met along the way, so helpful in many ways.

Arith has worked in the bush and outback of Australia to earn money for his journey. The hard jobs chopping wood, cleaning gardens, concrete work, cleaning dishes, “all these helped me to be a man of good understanding respecting others” he says. He talks about the aboriginal and Torres Strait Island communities assisting him in difficulties and enjoying time in swimming in lakes with the children and how the communities trained him on traditional dances. These are great experiences he says. He says the nature has gifted to human race the water streams, trees and animals. “I have learnt to treat such as another life. These are many self-inducted lessons leant through my journey. You meet amazing people at all ages in outback of Australia”.

In fact, he was talking about a Sri Lankan couple in remote Australia running a road house offering a meal of rice. Arith has now reached Sydney completing his round trip in Push bicycle and his next target is Indonesia , Cambodia , India before he ends up in Sri Lanka. Arith’s parents Lalith and Hiranthi Cooray and his sister are so proud of him and have raised no objections though scared on his expedition but every day keenly waiting for his message and whereabouts on his journey. He has done his early studies in Sri Lanka at Royal College before moving to Sydney for higher studies in University of Sydney.

You can see his expedition on his face book travel blog; Arith Cooray / Instagram- soloandlost https://www.crewbay.com/profile/crew/61719

The write up is based on video clips, photographs and discussions with Arith on his stopover in Brisbane.