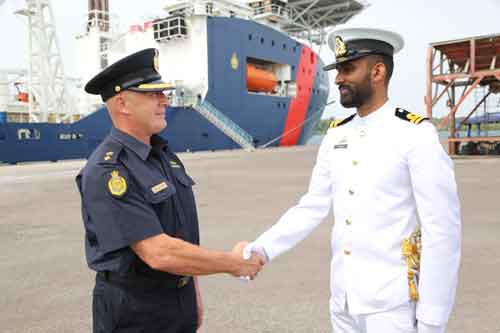 “People smuggling is a global problem. By working together with our international partners, we will defeat these criminals and help save people’s lives,” he said.

“Earlier this year Australia intercepted a people smuggling boat carrying 25 Sri Lankan nationals. In cooperation with Sri Lankan authorities, all 25 people on that vessel were returned to Sri Lanka.”

Despite the progress that Australia and our international partners have made in the fight against people smuggling, smugglers across our region continue trying to convince vulnerable people to hand over their money and attempt to travel to Australia illegally by boat.
Air Vice-Marshal Osborne is encouraging Sri Lankan-Australian community members to tell their relatives overseas not to risk their lives and waste their money by attempting to come illegally to Australia.

“Trying to reach Australia illegally by boat is dangerous and pointless. Any people smuggling boat that tries to reach Australia will be stopped and turned back. The illegal pathway to Australia is closed, and it will remain closed.”
For more information visit www.osb.border.gov.au

Read the articels in Sinhala

Read the articles in Tamil