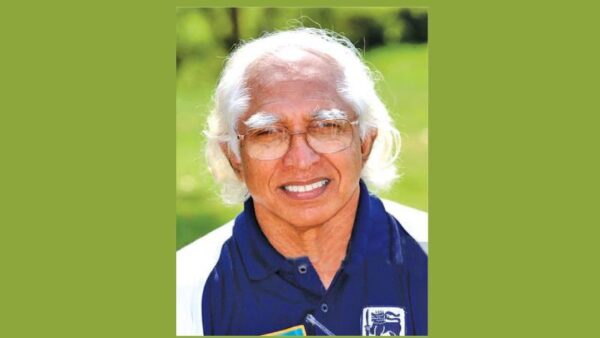 As one of the speediest and fittest players, Chandra Schaffter shone as a Right Extreme at the highest level. He knew that the shortest distance between one point to the other was a straight line and with his acumen would keep the defence guessing.

With an array of deceptive passes and accurate hits from various areas, from the right side line, usually foxed the opponents, enabling his forwards with ample time to plan their moves and score goals.

From 1954 to 1956, he was a regular member of the Ceylon cricket team both at home and abroad as an opening fast bowler. His best figures were 3/28 and 3/71 against Madras CA in Madras for the Gopalan Trophy which Ceylon won. He also played in 1954, against Len Hutton’s team, which was on its way to Australia, and was highly commended by the visiting team and press. He was also selected to play against Peter May’s team in 1958 at the SSC but never got on the field due to bad weather.

He captained the Colombo HA at the 2nd National championships

Chandra joined the Tamil Union C&AC, a club widely known as the premier club for cricket and hockey, in 1959 as a teenage schoolboy from S. Thomas’ College, Mount Lavinia, with a reputation of captaining the cricket team, vice-captain of the hockey team, colours in Soccer and Fives, played tennis and swam; easily selected as the Best All Round Sportsman.

With these amazing achievements, he was straightway selected to play for the national cricket team captained by Ceylon’s ‘Don Bradman’ M Sathasivam and the hockey team captained by one of Ceylon’s best ever A. Mylvaganam. What a baptism for any young sportsman.

Tamil Union reigned supreme in tournaments conducted by the Ceylon Hockey Association and later by the Colombo HA. They won the ‘Andriesz Shield’ League in 1949, 51, 54, 57 to 59 and 61/62 and the ‘Pioneer Cup (K/O), in 1951/52, 54, 58, 60 and 62/63, winning 15 championships. The Tamil Union vs Burgher RC encounters were classics, where the BRC also won 10 championships and attracted large crowds. In fact in Ceylon’s first ever tour abroad to South India in 1953, the team was captained by A. Mylvaganam and had six more including Chandra, while the BRC had six including Ernie Kelaart (vice-captain). Hugh Aldons could not make the tour due to leave difficulties.

During and after a distinguished sports career, Chandra devoted much time to resources to sports.

The first Sri Lankan president of the Mercantile Cricket Association, he had a great deal to do with establishing their present headquarters. Chandra Schaffter was at one time a Vice-President of the Cricket Board and the Olympic Council. He resigned from all sporting offices in 1973 or so, in protest against the Sports Act which he described as the “Nationalisation of Sport”.