COVID 19; Flattening the curve has not worked in Australia By Raj Gonsalkorale

Despite many measures taken in Australia, the aggregate number of positive cases is rising exponentially and not showing any sign of flattening. The daily number of positive cases is rising by around 25% and the total number as of the 25th morning was 2136. If this rate of increase persists, the number affected will rise to over 10,000 by the 31st March, and very frighteningly, to over 8 million by the 30th of April. This is the cumulative effect of an exponential increase. Containment of the COVID 19 virus is only possible if the rate of daily increase in positive cases can be reduced, and the curve that is reaching for the skies is flattened. This is what the medical experts say, and this is what all mathematical models are showing. These models show an exponential increase, which basically means a rate of increase becoming quicker and quicker as the factor that increases, in this case the aggregate number of positive cases, becoming larger by the day.

Despite this frightening prospect, the Federal and State governments have not taken the ultimate step that many other countries, the latest being India, have taken to introduce and enforce a total lockdown to arrest the increase.

From many accounts, it also does not appear the public have realised the seriousness of the situation if one were to judge their attitude from the Bondi beach experience, the gatherings of people one still sees in Parks, at parties and at other leisure activities despite daily doses from all governments about the need to exercise social distancing, self-isolation and where needed, quarantine.

As we have been repeatedly told, this virus is a respiratory illness, and it affects older people more than the young, although the latter is not reportedly immune to it. It is said to have graver consequences to people with pre-existing conditions like heart decease, diabetes, Asthma etc.

If more and more people with the virus require hospitalisation, the Australian health system simply will not be able to cope with the numbers if the current rate of increase in positive cases persists. Heaven help if it goes up further.

In the case of the number of positive cases of COVID 19 in Australia and Sri Lanka, as at 24th March, they stood at 2136 and 101 respectively. As stated, the discomforting factor, particularly in Australia is that this number is increasing by an average of around 25% on a daily basis, and unless this number is reduced, the consequences would be huge and the impact unmanageable.

Sri Lankan numbers are growing currently at around 9%. This too would pose a major issue for the health sector and the country.

Although the numbers are still much less in Sri Lanka than in Australia, two countries with comparable populations, both maybe said to be growing exponentially, meaning the factor that is increasing, the number of overall positive cases, is becoming larger and larger. It is no doubt greater in Australia than in Sri Lanka at present.

If the current rate of increase is not arrested, both countries could face a catastrophic situation unless the rate of increase in positive cases are not reduced. One does not have to be a medical expert to say this as a simple modelling exercise anyone with a basic knowledge of Excel could do and some common sense to understand the limits of the health system.

The current graph applicable for Sri Lanka is given below. This too is showing a steadily increasing trend although it has not reached the “Hockey stick” curve as seen with Australia. As many people of Sri Lankan origin here in Australia would have noted, the measures being introduced in Sri Lanka now include a curfew in many parts of the country. 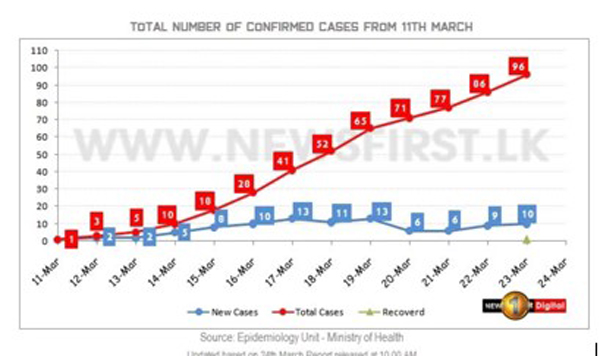 The tables noted below show the position of accumulated numbers of positive cases as at 31st March and 30th April, if the daily increase rate remains around 25%, and if the rates are reduced to 20% -5%.  The modelling is based on the actual numbers as of the 25th March 2020. The impact of rate reduction as can be seen is dramatic, and this can be achieved if the community applies common sense and conforms to the measures introduced by the governments

In the second table, which is for Sri Lanka, a similar presentation is made, reminding readers that at present, the rate of increase is around 9%. The other scenarios are shown to illustrate what would happen to the aggregate number of positive cases increase to 25%, 20% and 15%, and if it is reduced to 5%.

The simple rationale that governs the response to fast growing pandemic is simple, and it is based on the scientific advice and expertise that is available and being provided to both Australia and Sri Lanka, and indeed other countries including the USA, UK, Germany, India and some 190 countries throughout the world. It is the logic that was used and implemented, and favourable outcomes achieved where it all began, in Wuhan, China.

Medical experts universally accept that based on what is known about this virus today, and how it possibly spreads, the one and only method of containment would be to take very strict measures to prevent its spread by three key methods. (A) – Through social distancing, (B) Self isolation and (C) through quarantine.

The world as we knew it before the first case was detected in Wuhan, China on the 29th of December 2019, may never be the same. There are views being expressed that it should not be the same as it was a world where war and mass exodus of refugees and untold suffering by millions of people were being experienced, and where climate change was slowly but surely killing the Earth. It was a world where the disparity between the haves and have nots was increasing and where materialism was triumphing over humanitarianism.

However, while discussions on all this must take centre stage at some point, the current challenge for the world where 192 countries have already been affected by COVID 19, and which has resulted in a near total crash of the world economy, is about containing this dreaded virus, and making the world stable from a health perspective.

Governments can only give directions based on expert medical advice. Only people can arrest this virus by following such directions and by doing even more using one’s common sense. The casual indifference seen amongst some to the danger and impact of this pandemic must be replaced with responsible community obligations if we are to be victorious in defeating this common enemy, COVID 19 and see “the brightness and opportunities on the other side” as the Prime Minister Scot Morrison often says.