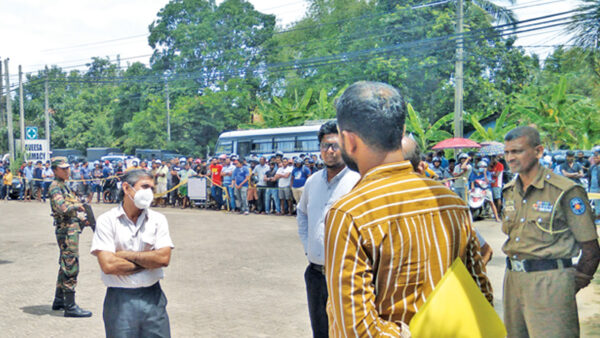 CAA officers and police at the petrol shed which was found to have hidden fuel stocks.

The Anuradhapura District Office of the Consumer Affairs Authority (CAA) said that officers found 5,813 litres of super diesel and 1,540 litres of petrol hidden in the underground tanks of a fuel station in the area during a raid carried out following a tip-off.

The management of the petrol station had told the investigating officers of the Consumer Affairs Authority that their filling station did not have any fuel stocks.

However, investigators who inspected the underground fuel tanks at the filling station were able to find concealed stocks of super diesel and petrol.

Accordingly, the investigating officers obtained fuel samples and statements from the suspects to file a case against the two owners of the petrol station and its manager on the charge of concealing fuel.

All the hidden diesel and petrol was then sold to the public with the intervention of the CAA officers.

The Anuradhapura office of the CAA said legal action will be taken against the two owners and the manager of the petrol station.